Is the fact that a woman inherits only half the share of a man a kind of injustice?

Wherever inheritance is on topic people quote those verses of the Qur'an, were we read the similar sentence:

This is lately often used by modern Muslims or feminist Muslims to call for an (share) equality between both genders!

This amount might even differ (increase) in some cases as quoted in the Qur'an, but is this a kind of injustice towards women?

What is the secrete or logic behind this division?

Note that I've heard a scholar saying that in fact in most situation it is the male who inherits less than the female, I'd be interested in a commentary/explanation on that!
Also note that the missing part of the verses above is quoting children or more exactly the inheritance shares of siblings from their parents only, not all possible cases of inheritance!

TL;DR: Inheritance is a component in a dynamical system, and this component is imbalanced so that men receive a greater quantity. The system, as a whole, can favor either men or women, depending on how stingy/generous men are with maintenance and mahr. 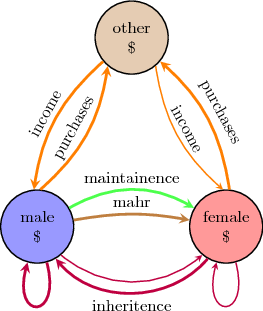 Like all models, it's simplified (so some aspects are not included, e.g. men can give women money, and women can give men money). There are imbalances between males and females as per the Qur'an:

While the model is imbalanced, we can't determine from observing one component of this system whether or not it is unjust. Indeed, the parameters of the model will determine the long term ratio of "male money" to "female money". If men are generous, and give more maintenance and mahr to women, then the model could favor women. On the other hand, if men are stingy, the model could favor men. This freedom may function as a self-correcting mechanism.

Instead, female get the share from the husband when they get married for example !

The Logic behind this is simple

So throughout her life she will have a male for her assistance. Hence this male deserves double the share. and also vice versa is not a religious duty of a female.

In addition to the other answers which point that the man is responsible for his wife, children, elderly father, mother, etc and that women have no such responsibility and are also entitled to nafaqa and mahr:

I can give you a more complex explanation from my personal observation, nothing official. I fear for the pro-feminists would not like it. I see myself as one who respects women a lot a lot—just in a very different way. You can see my other answer on obedience of a wife

To find your answer: Look into the west and compare it with (true) Islam, not ignorant Islam. To see what I mean, again see my the answer I linked above.

In the west ( In US the rate of divorce is %40-50 significantly higher than average Muslim countries, although the western culture is affecting them) women have equal share of money and are far less inclined to marry themselves to another. They're like I'm financially stable why do I have to marry him, or why do I have to still be married to him while I can sustain myself?! Islam's idea isn't to weaken women, rather it's to make both sides more desirable and performant in what their role is.

What becomes virtuous among women becomes their money, their car, their house, their education, their degree (some require a lot of time and eventually increase the average age of marriage and reduce the average number of children). All mundane stuff. Islam wants us to shatter than way of thinking. Islam totally agrees with a mother/wife's education but wealth for a wife is not virtuous, for a husband it is somewhat.

But basically it's that most of the money is to come to the husband so he is deemed more appealing to a future bride and then let him give to his wife so love is kindled among them.

Despite near equality in numbers, according to Bloomberg, women make more than 85% of the consumer purchases in the United States, and reputedly influence over 95% of total goods and services purchased.

On a semi-serious note I sometimes ask myself how did my wife agree to marry herself to me? I mean wasn't wealthy in any way, didn't have a house, car good investment. All I had was a job and fresh out of college. Perhaps with such support I and other husbands will be more appealing to women. Men never assess a lady based on her wealth. Even though she can she bring it (her money) to her new life, it isn't part of her duties.

Having that said there are points that I obviously don't understand on this and many other subjects.

Also see the comments below.

First of all note that the verse part saying a male inherits twice of what a female inherits apply to brothers and sisters only, so it isn't a general ruling in shari'a.
Also note that in shari'a the shares of the women are specified and given a leading position they are called أصحاب الفروض ashaab al-Forod those with a specific share (the counterpart is called العصبات al-'Asabat and they are of three categories and all are male or at least offspring of male), so in presence of a female her share is taken in account in first place. Of course some males are also among ashaab al-Forod. The shares of men however may increase after considering all primary shares by distribution of the rest of the heritage!

This seemingly injustice (I especially mean the fact that a male can have more than his prescribed share, but also the cases where men inherit more than women) is of course -as many if not all of the given answers say- due to the fact that a woman is not asked to pay mahr nor to be in charge for her family while this is the man's duty according to shari'a!

In this link I found a hint of an answer with another indication of what I've heard their it is said that:

So basically a woman can inherit:

Sources (Arabic only) islamqa#135065 and this article on the shares of women.

Not the answer you're looking for? Browse other questions tagged sharia inheritance men-women .

11
What does being an obedient wife really mean?
6
Does Islam teach subjugation and inequality of women, or is that due to a wrong interpretation of the religion?
4
What is Shia Islam's take on the deficiency in women's intelligence?
1
What is number of possibilities of cases in Inheritance can occur while distributing inheritance according to the Quran?

4
Men get Alhour Alein, what do women get?
5
Why is the blood money of a woman half that of a man in Islam?
3
The example of the inheritance shares issue: how comes the Quran needs to be corrected?
4
Is niqab important so that man don't gaze at woman
6
A Muslim woman should not dye her hair "in the manner of kaafir women"; what does that preclude?
2
What does the exception in "No man should be alone with a woman except when there is a Mahram with her" mean?
3
Please its a request, someone explain me why there sum of inheritance shares are not coming one in QURAN verses of Surah-Nisa?
1
When can a virgin muslim man marry a raped woman, and when isn't that possible?