Is anyone at fault for money containing images?

Many world currencies contain images, e.g., the Saudi riyal has an image of King Abdullah. 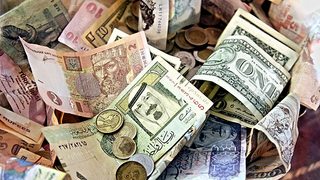 When asked about the use of money with images on them, Islam Q&A wrote:

Images on money are not your fault, and you have no choice but to possess it and keep it in your house, or carry with you in order to use it for buying and selling, giving as gifts or in charity, and paying off debts, and other legitimate purposes. So there is no blame on you.
Islam Q&A

Saying "not your fault" suggests it is someone's fault: possibly the person(s) who designed the currency, or perhaps whoever permits its circulation.

Question: Is anyone at fault for money containing images?

In my answer here, I look at some online fatwa. From what I observed, most Sunni schools of fiqh (with the exception of Maliki, to some extent; see SeekersHub) agreed that image making is haram (based on hadith such as Sahih al-Bukhari 5957), whereas Shia scholars didn't seem strongly against image making. Moreover, as I understand, the above fatwa is a Salafi (Sunni, Hanbali) fatwa. Thus, I'll ask for a Sunni point of view.

The objective of the following is not to answer your question; rather, to show why it is difficult to give a precise answer.

The Islam Q&A Fatwa 256888 stipulates that using money with depictions of rulers is not the users' fault. Someone is obviously at fault, but scholars refrain from point out who for reasons related to what is termed as public interest (al-maslaha, Arabic: المصلحة), which is typically classified into three categories: permitted (mashrū'ah, Arabic: المصالح المشروعة), without ruling (mursalah, Arabic: المصالح المرسله), and prohibited (manhiyyah, Arabic: المصالح المنهيه). The fatwa by the Permanent Committee (or the Standing Committee) is based on this for its justification of "legitimate purposes." However, a very advanced level of knowledge is required to understand such matters and is often debated among top scholars of jurisprudence (see Islam Q&A Fatwa 259348 Arabic only, and Islam Q&A Fatwa 160876 English and Arabic).

It is worth noting that the other links you provided talk about a completely different topic, which is making depictions rather than using them. There is always a mixing of views when it comes to such matters (this is why the SeekersHub article you quoted said 3D and complete are depictions are prohibited, while 2D or incomplete depictions are disliked, therefore drawings of living things are not prohibited and it is not clear based on what).

Permissibility is based on a number of things that you can think of as a matrix with the top row being: making, possessing, using. Then the conditions in the rows to follow are:

Historically, Muslims used coins which had the head of the Roman Emperors on one side and the cross on the other until they mad their own currencies later on. Whose fault is it will require an analysis of all the above criteria in connection with the fact that currency is a maslahah mursalah; there will be no trusted answer given — while pointing out the culprit — in such a forum.

Not the answer you're looking for? Browse other questions tagged sunni money image .

2
What is the ruling for making images?

9
Are skulls / skull images haraam
5
Are Christian images of Jesus sacrilege?
2
Is downloading cartoon images Haram?
1
Raising money for a charity drive
2
Are images of the Prophets more haram than images of other beings with souls?
2
What is the ruling for making images?
0
Books with images after removing the images