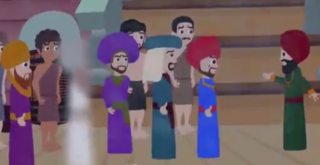 Islam forbids images in general, regardless of whether they are of prophets or of others. However at least some scholars hold the view that creating images of prophets is more serious than making images of others. The encyclopedia of fiqh for example states this: وتصوير الأنبياء أولى بالتحريم

Among the evidence cited for this is the hadith which explicitly condemns Christians for making images of righteous people (prophets are foremost among them):

Um Habiba and Um Salama mentioned about a church they had seen in Ethiopia in which there were pictures. They told the Prophet (ﷺ) about it, on which he said,

"If any religious man dies amongst those people they would build a place of worship at his grave and make these pictures in it. They will be the worst creature in the sight of Allah on the Day of Resurrection."

Images of prophets can be considered more serious sins due to the following:

Not the answer you're looking for? Browse other questions tagged prophets image .

48
Is drawing or photographing people prohibited in Islam?
2
Is downloading cartoon images Haram?

7
Is it Islamic to execute people who insult prophets other than Prophet Muhammad (peace be upon him)?
3
Can one draw images of humans and animals without their eyes?
3
Is the rank of Imams (spiritually) higher than other prophets? (Except Prophet Mohammad (s)) (Shia view)
1
Is Hentai Haram? (Drawn Awrah)
1
Are Prophets not among the 70000 who will enter paradise without accountability?
0
For the sake of argument if fadak was to be inherited who are the inheritors other than fatima?
0
Books with images after removing the images
0
Did revelations occur to people other than prophets as in the mother of Prophet Moses? If yes, why are they not considered as Prophets?
1
Were there any prophets who were sent to places other than the middle east?