During the hajj, pilgrims circumambulate the Kaaba but do not enter the building. I was curious about its interior and found this image. 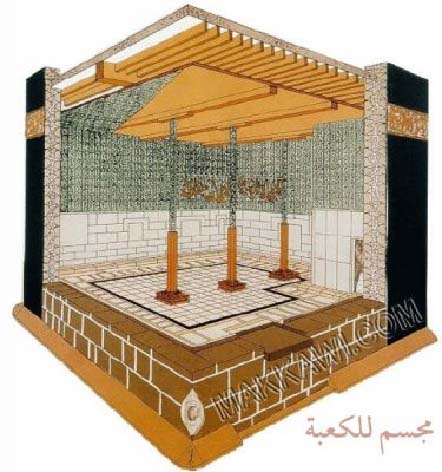 Do the three pillars have any religious significance other than structural support for the roof?

Who is allowed to enter inside?

Do the three pillars have any religious significance other than structural support for the roof?

Well to be honest my answer will be partly opinion based: As i could exclude a religious significance for the 3 pillars (as AFAIK no body exactly knows if the 3 of them were there at first or have been built in later, as ahadith only mention the two which are in direction of Yemen others mentioned that it had 6 pillars) i think they have only an architectural/statically significance. Because the significant religious parts of the Kaaba are more or less outside: the black stone, maqaam Ibrahim (peace be upon him) and the Kaaba cube itself as the Qibla (direction for the prayers).

Who is allowed to enter inside?

You should know that the Kaaba has been built and re-built several times and after the time the sahabi Abdullah ibn az-Zubair (may Allah be pleased with him) has re-built it according to a Hadith narrated by um al mu'minyn 'Aisha (May Allah be pleased with her) see here or here which shows that the Kaaba had 2 doors and even according to some ahadith and narrations by scholars of the early 3 centuries of Islam one could enter it and pray (nafl) or make dua' in it. Now apparently it is closed and only the Family of Bani Shaiba بني شيبه an Arabic tribe (from Quraysh) holds the keys to the Kaaba according to some ahadith or narrations as they are descendants of 'Othman ibn Talha (May Allah be pleased with him) who hold the keys when Mohammed (peace be upon him) entered Mecca in year 8 AH.

Here some other references for worshiping inside the Kaaba:

and Jami' at-Tirmidhi (in the Arabic comment you can read that Imam Malik ibn Anas said that there's no harm in praying inside the kaaba for nafl and he said it's makruh to pray a fard prayer inside, while Imam a-Shafi'i said there's no harm in praying nafl or fard inside the kaaba as they have the same conditions of purity and qibla). So apparently the Kaaba was still open(ed) around 200 AH!

And this would mean any body (of course i mean Muslims as non-Muslims are forbidden to enter the Haram) could enter it. But as now the doors are kept closed expect for the cleaning ceremony (AFAIK) nowadays this won't be easy anymore!

Further informations about the rebuilding of the Kaaba could be found here and here and in Wikipedia of course!

Not the answer you're looking for? Browse other questions tagged history hajj kaabah or ask your own question.

5
What is the correct direction of praying in Masjid Al-Aqsa?
4
Prayer direction inside kaabah
2
What did Mushrikeen think about who built the Kaaba?
1
Skipping confussion about First Qibla of Islam

2
What did the prophet (PBUH) said to the bounty hunter who accepted Islam during Hijrah and what is his name?
13
Why is the Kaaba covered in black cloth?
10
Prophet Ibrahim (PBUH) footprint near the Kaaba
3
Does the reward of Hajj for another person go to him? (Hajj-e-Badal)
8
What is the black stone in the Kaaba?
2
What did Mushrikeen think about who built the Kaaba?
3
Is it permissible for Muslims to receive subsidy for performing Hajj?
6
What does this symbol from inside the Kaaba mean?
2
Is there any importance for Toe Rings in Islam?