i know the Holy Quran was revealed in seven different Ahruf or dialects but Uthman(ra) burned the different variants and only left one so why is there this difference between Hafs with Qalon & Warsh versions? 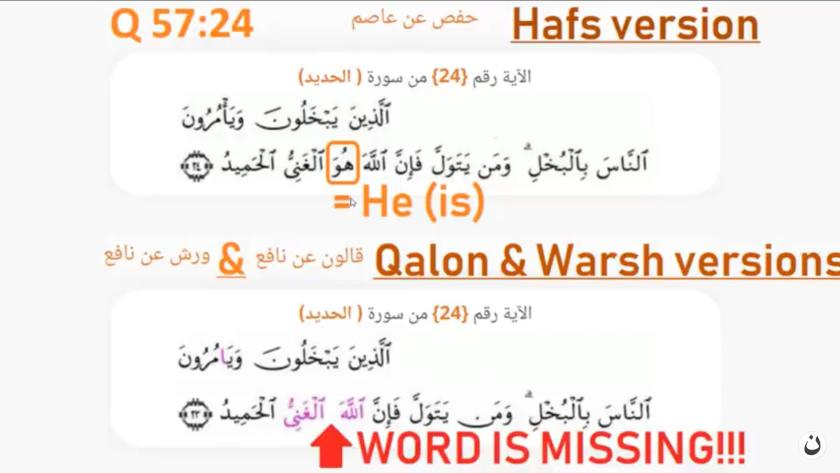 Uthman (RA) created several copies of the mushaf to be distributed to different places. They had minor differences between them. This is one of those differences.

Specifically speaking, Imam Ibn Jazari (RA) says that the Mushaf of Madinah and the Mushaf of Sham (Syria) did not have the word هو. The rest had it.

Does the missing word has any impact on the meaning?

Let's start with the easier thing: The missing word "هو".
This word means in Arabic "he is".

Let's now check the difference in the meaning:

Can be literally translated:

then indeed, Allah is the Free of need, the Praiseworthy.

While the meaning of the second variation with the additional "هو":

could be translated as:

then indeed, Allah, (only or indeed) He is the Free of need, the Praiseworthy.

Does this add any meaning? "No" (Not really).
Does it make any difference? "Not really".

So from a linguistic perspective one could easily strike the word "هو" and the sentence means the same. In Arabic this addition is used to emphasize and lift any doubt that the speech is about "Allah" and only Allah.

So basically one reading/moshaf adds this confirmation and emphasize while in the other it is regarded as unnecessary.

Before the qur'an was compiled in a Moshaf and later and until today it was and is transmitted orally from teacher to student generation by generation. And this is how Allah intended it to be:

Rather, the Qur'an is distinct verses [preserved] within the breasts of those who have been given knowledge. And none reject Our verses except the wrongdoers.
(29:49)

And the qur'an was transmitted by Sahabah from different Arabic tribes with different slangs and dialects and in cases the sahabah needed to make it easy for the non Arab new Muslims and therefore teaching it by explanation and by synonyms was wide spread (for examples refer to my answer on: What are the readings (qira'at) of Quran?.

So basically if 'Othman didn't make a stop for this we may have a much larger difference!

Let's make an example in English language (and syntax and idioms):

all these sentences mean the same in English, but they use different words! And now just imagine different qur'an recitations or moshafs with this difference in wording (and this is a rather basic and simple example), wouldn't this lead to more confusion?

Why are there missing or added words in some Moshafs?

This is the most difficult question and it could be paraphrased as: where the copies sent by 'Othman to other cities one to one copies of the moshaf al-Imam or not and why? I'm afraid that it can't be answered that easily. But I will try to answer or leave a hint of an answer later

20
What are the readings (qira'at) of Quran?
10
Why is the Hafs reading of the Qur'an so prevalent?
0
Why are the number of verses different in Warsh and Hafs?

7
Are there any actual textual differences in Quran?
12
When Uthman burn many versions of Quran, how do we know that the burned one are the "wrong" ones?
4
The Quran had 7 Qira'at, so doesn't mean it's 7 versions?
3
Is it possible to compile the Quran chronologically, are there books about this?
6
Different versions of Arabic Qur'an
0
How do we know which qirat were abrogated and which we can continue to recite?
0
Why are the number of verses different in Warsh and Hafs?
0
Meaning of Hadeeth?