Coping with translating the Qur'an into Chinese and Chinese characters (hanzi) which are caricatures of animals?

Some Chinese characters (汉字, hànzǐ) are derived from caricatures of animals. The most famous one is for horse (马, mă); see below. Others include man (人, rén) and bird (鸟, niǎo). (Others derived in this way require a bit of imagination.) These form radicals within other characters, e.g. mother (妈, mā), and components of words, e.g. road (马路, mǎlù). This could pose an obstacle if one wanted to translate the Qur'an to Chinese and was against caricatures of animals.

Question: How does one cope with translating the Qur'an into Chinese and characters which are derived from caricatures of animals?

This Chinese translation of the Qur'an (古兰经, Gǔ​lán​jīng​) doesn't seem to mind, with 马 appearing. So maybe it's not a big deal? (I've been known to overthink things.)

The character in the centre of these ancient Oracle bones is supposedly an ancient form of mă (pre-dating Islam): 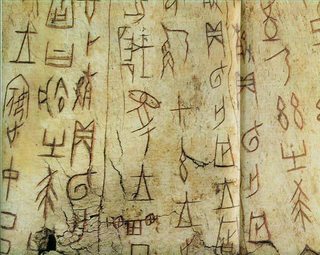 (I was unable to find the original image source.)

Honestly there are two points here:

Is it allowed to translate the Quran?
Most earlier scholars were against this and there are still some now. The proof for this is the process of making the Quran easier to read which has especially taken place during the Ommayad dynasty. Beside many ahadith (like this and this with an explanation) prohibiting to go to a non-Mulsim country carrying the Quran with you most scholars like an-Nawawi said about this that the Quran shouldn't fall in the hands of our enemies, but it was allowed to send them verses of it to remind them (based on this hadith). Those scholars who say it isn't allowed today point at it saying that no translation can be similar to the original.

I'm not aware of anybody who would disagree that the rules can only be taken from the original text. (here an example of a fatwa on the matter)

The other is the case of your Question: a caricature based language like Chinese?
IMO the end justifies the means. That means is the weight of drawing symbols or caricatures more than making people learn about Islam and the Quran on the other hand. I think the last one overbalances the first. But there's a mistake many people are making: The names of the surahs in the Quran are considered tawqifi توقيفي (this is the most correct view, see also this fatwa explaining this term), this means one shouldn't change them but take them as they are, so surah two for example is named "al-baqarah البقرة" one should not translate that name into "the cow", but one should keep it as is, as this was the name given to it by Allah and our Prophet!
On the other hand I'm quite sure that the characteristics of a language don't change the rule or the verdict given by many fatwas allowing a translation under the condition that it is done by experts (beside other conditions) and that it was made in the (absolute) belief that a translation can't be taken as a source for ruling as it can never be a one-to-one "projection" of the original text.

Not the answer you're looking for? Browse other questions tagged quran quran-translation animals .

5
Are the English translations of the Qur'an practical to read with the purpose of understanding?
9
What are the longest Surah and Ayah of the Qur'an?
3
Are lions mentioned in the Qur'an or any other Islamic source, and if so, are they positively mentioned?
1
Can animals see the angels and jinn and hear the cries of the dead?
6
Which Qur'an verses are abrogated?
1
Which animals are recommended to be kept at home? (Shia view)
5
Are the letter forms of Arabic essential to the Qur'an?
2
What are the conditions that allow killing animals out of self-defense?
2
Are there any disbelievers among the animals?
1
What are the words "all things" and "writing" in verse 78:29 referring to?