Can water be halal or haram?

On a flight from Tokyo to Sydney with Japan Airlines, I was given a bottle of water that was certified halal. (Apologies for the image quality)

Do Muslims consider water as being potentially halal or haram, or was this a case of certification going overboard? (I can spot four other certifications on the bottle) 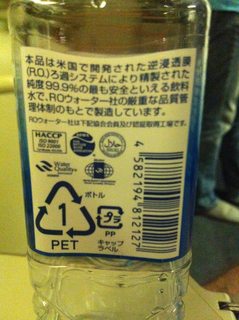 Pure water by itself is fundamentally halal. If there are haram impurities involved, the water would also become haram; not because of the water itself, but because of what's in it. So, for example, if it was drawn from a small pool in which someone was storing their dead pig carcasses, we shouldn't drink it (most would chalk that up to common sense though).

It's always nice to know that there were no pig carcasses involved in the production of your water, but I would call the certification overkill in this case.

Of note, if the water is not actually pure bottled water, but rather some brand of flavoured/enriched water, there is an increased chance that the additives themselves are haram. Given that a number of common additives are of animal origin, the certification makes more sense in such cases.

It's actually the preservatives used in the water , as it may contain traces of pig fat in minute quantities , thus making it impure , perhaps that's the reason , anyway , say bismillah-erahmanirahemm before eating or drinking anything ! Peace *

Yes, a water can be halal or haram, the reason is that bottled water can come in contact with materials made from pork or dead animals, as well as some added ingredients. For example apple juice is clarified with gelatine, but this is never mentioned in the ingredients list. Knowing that gelatine is generally made from pork the apple juice would be in this case haram.

Bottled water goes through extensive processing and treatment including purification, filtration, and sometimes mineral adjustment, chlorination, fluoridation or ozone treatment, in order to make it safe for human consumption. During this process it may come in contact with chemical materials potentially derived from pork or dead animals.

At certain country, if you are food manufacturer and ask for the halal certification from the halal certification body, they will asking you for any treatment of water that you used for food processing including water filtration. Because they are so many types of water filter now days and the water filter cartridge can be from animal bone where are you not sure whether they are halal or not or whether it is slaughtered or not.

3
If "that which intoxicates in large quantities" is haram, does that mean water is haram?
4
Are there any special rules about the halal certification of dairy foods?

6
Do any schools consider eel haram, and why?
4
Does food need a halal certification?
4
Are there any special rules about the halal certification of dairy foods?
1
Is Marmite Halal/Haram?
4
Can Sunnis eat meat authorised halal by Shi'a?
5
Is mechanically slaughtered chicken halal or haram?
1
Can non halal food become halal food