What is the difference between Shia and Bohra People?

I saw most of the Shia and Bohra people's activities are the same.

But, I heard they had some difference between them.

What is the basic difference between these two people?

The major difference in any of the Shia sects is the succession issue, you would find new Shia sects being formed after the demise of their respective Imam with each party claiming that they have the correct Imam and perform takfeer on the other sects with different set of Imams.

The Ismailis were split from the now mainstream Shias over the succession issue of Imam Jafar Sadik. The Ismailis took Ismail bin Jafar as their Imam whereas the 12ers(Ithna Ashari Shia) took Musa Kazim bin Jaffar Sadik as their Imam. Continuing with the Ismaili Imams, Ismailis got split into Druze and mainstream Ismaili then further down the line they again got split into Nizaris(Aga Khani\ Khoja, the only sect to have the Imam to this date) and Musta'ali branches , the Mustaali branch ended at Tayyab, who went into occultation. Now the Imamless sect was governed by what they call as Daee Mutlaq (Unrestricted Missionary) who are the alleged representatives of the Imam who is thought to be hidden somewhere. Again there were many splits in the hierarchy of Daee, which led the formation of dozens of Bohra sects : 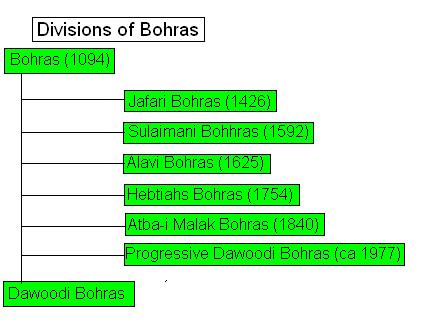 The current major Bohra sect called the Dawoodi Bohra is again facing the same succession issue of the Daais as the position of Daee holds great position of Control and power, abundant wealth and lavish lifestyle.

Doctrinal differences between the mainstream 12er Shias and Bohras are that the Bohras belive in an esoteric interpretation of Quran and Islam , wherein each verse\ words of the Quran can be given completely different meanings. This may hold true even for the mainstream sects albeit with a relatively less esotericism.

Most of the mainstream scholars have declared them to be disbelievers due to their ardent worship of their leader who is called Daae , the Daee of this sect calls for his devotees to prostrate to him and there is frequently sung poetry in their Majlis dedicated to the Daee :

Following are some typical activities they do:

There are various bohra sites , most important of them is this one which has turned into a general Islam Q\A site. In this site you will get to know more details about the Bohra religion. The author of this site is himself is a former Bohra.

P.S: I myself is a former Bohra who left this sect for pure Islam based on Quran and Sunnah

Bohras are the peaceful community and they follow all the norms of Islam.

However,the concept of Bohras is dragged and badly formulated which led to the misunderstanding among different sects.

Dawoodi Bohras believe in the basic faith of unity in Islam(Tauheed), and Hazrat Mohammad (SAW) as thelast prophet on earth. Hazrat Ali(RA) is the first Imam, who, after the death of Hazrat Mohammad(SAW), protected the religion and was the first Caliph who ruled and established the peace among the people by following the norms of Islam.

However, Dai, is the spriritual leader of Dawoodi Bohras,the word Prostrating is wrongly used in the above context, as Dai is the person who teaches the basic principles of Islam and binds the people of the community to strictly follow the Islamic teachings and principles. He, himself is prostrated to Almighty Allah, as the concept of the unity of God in Islam. Dawoodi bohras are bend down towards their spiritual leader for the fact that he has bind themselves united as one community under the preaching of Islam.

P.S: Kindly avoid posting the half-knowledge of urs when you don't know the origins!

Not the answer you're looking for? Browse other questions tagged shiism bohra .

13
What are the sources of Legislation in Shia Islam?
16
What are the origins of Shia and Sunni division?
17
What is the difference between a Prophet and an Imam according to Shi'ite theology?
6
Who are the guardians of Mecca according to Shia theology?
5
What is the status of the divorce if it were given through court stamp paper according to Shia Islamic law?
8
Why do Shia care about Hussain and not Hasan?
3
In Shiite school of thought, how is the conflict between free will and determinism resolved?
5
Are Ayatollahs Khomeini and Khamenei authorities in Shia Islam?
1
Inner sects of Shias and beliefs regarding wives of Nabi SAW and companions