What is the correct translation of 75:5?

What is the correct translation of 75:5?

According to www.hubeali.com, which is Shia source, it is

But, the human being wants to undermine his Imam

But at quran.com, which gives only Sunni translations, I couldn't find any translation alike. All translations there are similar to

But man desires to continue in sin. (Sahih international)

The Arabic text is

It is ending with the word "Amama" (resembles "Imam") which gives impression that Shia translation is correct.

So, What is the correct translation of 75:5 into English? Is the word Imam there in the original Arabic text?

I did following comparison between Uthmani text of the verse and Riyaz's dictionary screenshot of which he posted. And according to this comparison Shia translation is correct. 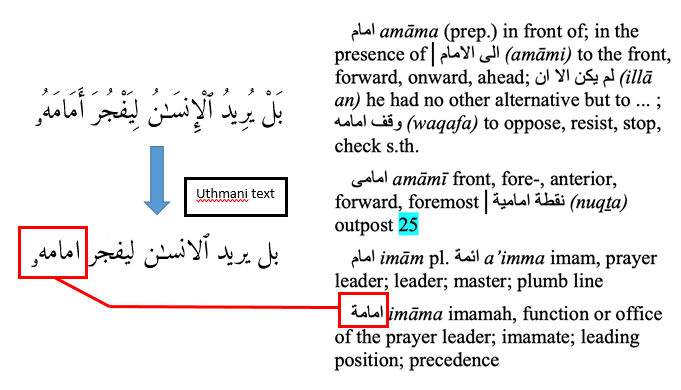 And in comments section user @The Z said

The verse clearly says Amamah (in front of him), not Imamah (his Imam). Meaning he wants to sin in the future I.e. continue sinning.

I hope he will give additional comment on this.

means "in front \ ahead of him"

As an example of the usage of the first word in ahadith, see:

He forbade a man to spit to his right or in front of him, rather he should spit to his left or beneath his left foot.

He looked at the Mushrik in front of him, who had fallen down on his back, and saw that he had been struck on the nose, and his face was cut as if with a whip

The verse 75:5 uses the first word, as such it means what has been conveyed by most of the translations (see here).

Many Shia tafsirs and translations that I have checked also agree with this. For example Tabataba'i when commenting on the verse 75:5 in his tafsir writes:

Amām (ahead, front, before) is a ẓarf makān (locative container, adver- bial noun of place) which is used metaphorically for future. “Sinning ahead” means continuing to sin as long as one lives. The antecedent of the pronoun “him” is man.

As for the second translation, that is based on a Shia tradition, a possible explanation that is given by their scholars for it is as follows:

Perhaps he recited إمامه with a Kasrah on the Hamza

This would be a deviant recitation which uses the second of the three words that I have list at the top of this answer. It is also possible that they have given other explanations for the tradition as the words are similar and are linked in their etymology.

Look at the context. Verses 1-6. The context here is "day of judgement" which kuffar deny. Look at the name of surah. And look at what comes in verse 6.

Verse 1 and 2 Allah swears to highlight the significance of what comes in the following verses.

Verse 3 Allah is challenging the disbelievers who think they shall not be resurrected.

Verse 4 Allah is confirming that he can even resurrect the fingertips.

Verse 5 Allah is informing disbelievers that they are denying the what is ahead.(Day of judgement) and desires to continue committing sins.

You need to understand arabic to understand word Amamah. Please the screenshot of dictionary. It comes from the root word أ م م which means "In front of", "Forward", "Ahead". It also has meaning Imam(Leader/Guide). Why? Because Imam is always in front leading and guiding. But in this context Allah is not referring to an Imam. Allah is pointing to what comes ahead after death. 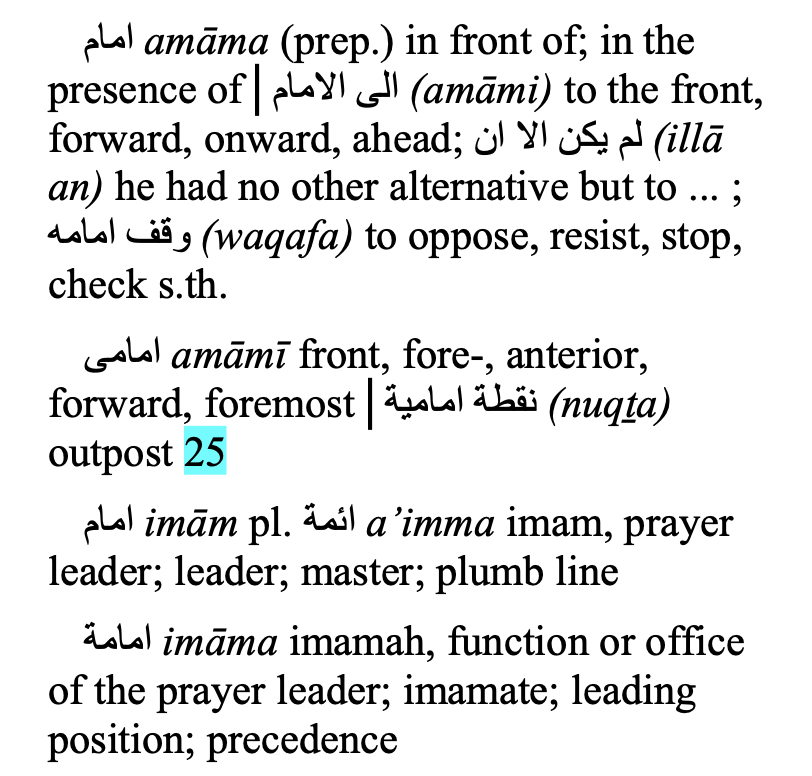 Not the answer you're looking for? Browse other questions tagged quran-translation .