Are these narrations of Ibn as-Sunni authentic? (Last part) 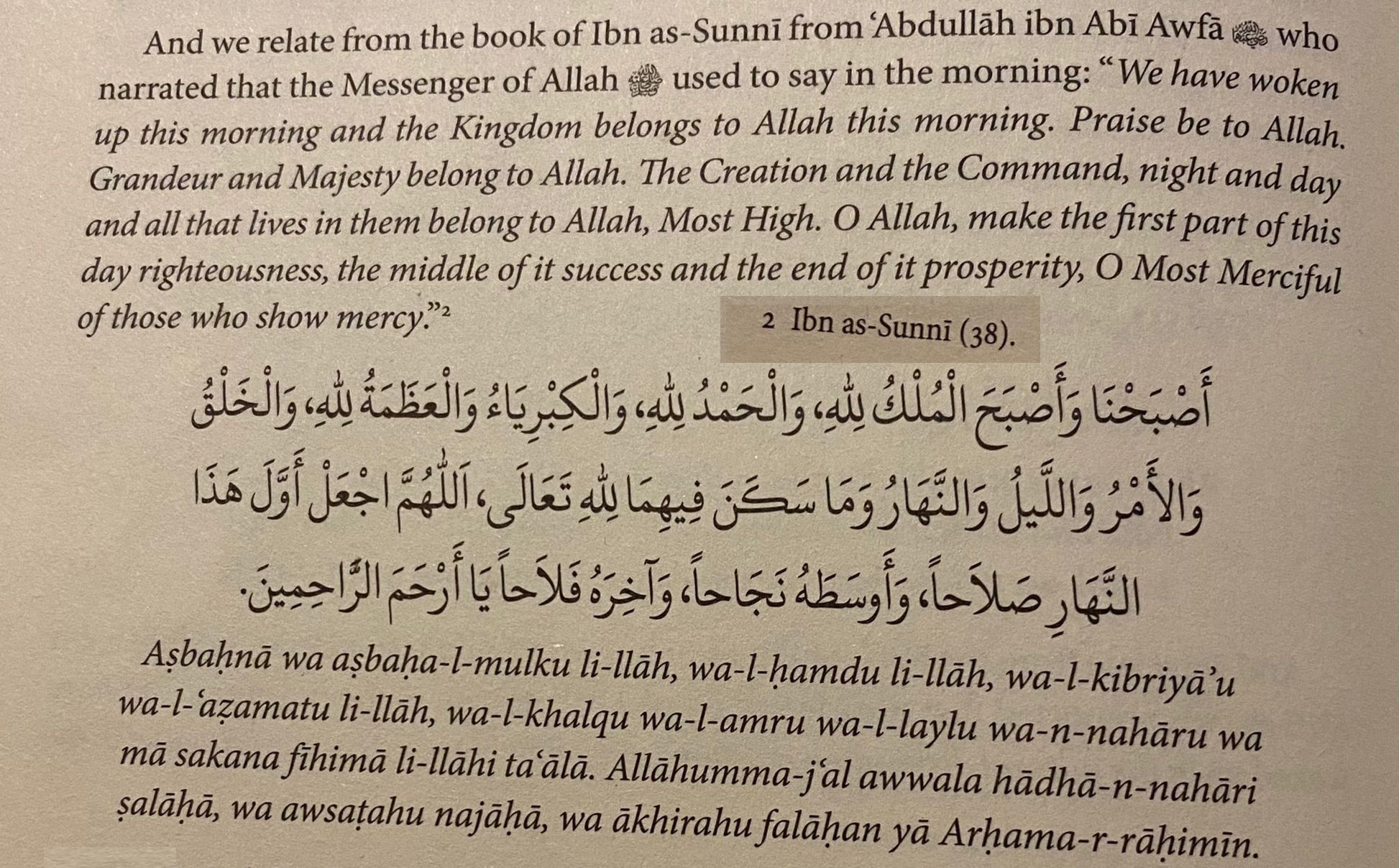 Following the suggestion from @Medi1Saif regarding this post. Hereinafter, these adhkar (in parts) are taken from the book of Imam An-Nawawi, which have no mention of any commentary or authentication. Furthermore, throughout my research on the internet, I have not found any information regarding these ahadith of Ibn as-Sunni.

- Here are the first and second part -

Note this is a work in progress:

A mawqoof hadith basically is a practice or statement of a sahabi () it could be regarded as stronger than a da'if hadith if it was identified as authentic.

Note that the indication of the teacher (Muhammad ibn 'Ali) of ibn as-Sunni at least gives six possible results -most of them are rather unknown narrators- in the database I've often consult. While a-Dhahabi only pointed at a student with this name in his Siyar.

An-Nawawi in his Adhkar only reported a paraphrased summary of the hadith with the du'a without any qualification (see here #242). Al-Arnaoot also remained silent about it too.

Ibn Hajar in his Natai'j al-Afkar volume 2 page 440 addressed the surrounding story of the hadith with his own narrator chain which correlates with the part from Bishr ibn Musa to ibn Mas'ood (only ibn as-Sunni's teacher is not included) and declared the sanad as sahih. Here's a copy of the content: 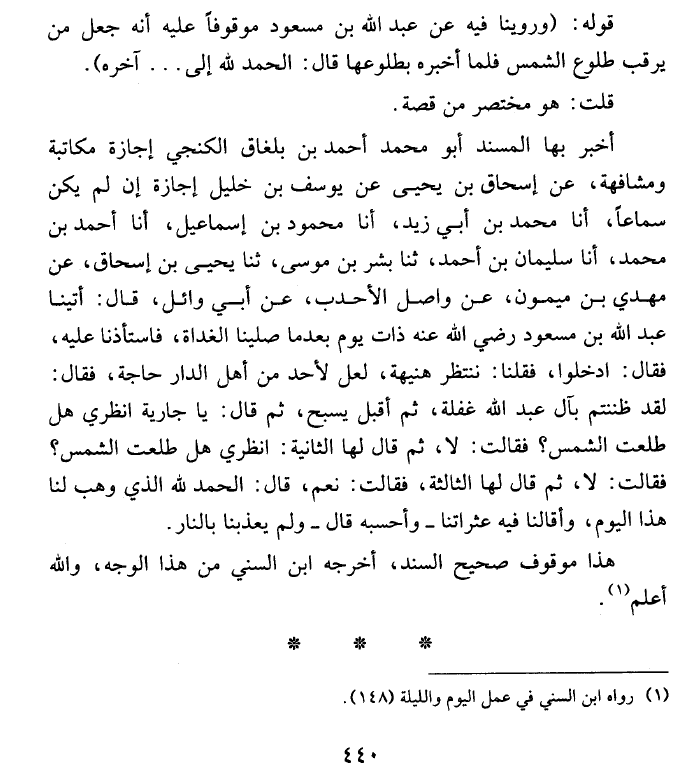 The only differences between the two are the remaining narrators and the additional details in the narration of ibn Hajar: abu Wa'il apparently didn't come alone, and added the information that he came after the fajr and shortly before a-Shuruq and it includes a missing part of the story as narrated by ibn as-Sunni, that ibn Masu'd after receiving his guests already had started doing tasbih (in ibn as-Sunni's narration it is said - later- he continued doing it) then he started asking his home maid...

This means that the hadith is marfo' and a doing or saying of a sahabi and as is it is fine to do accordingly as the value of a sahih narrative from a Sahabi is better or equal a da'if hadith.

Further the hadith appears in Sahih ibn Hebban #2607 with a slight difference in the wording and some additions. This version correlates with the narrator chain of ibn as-Sunni from Mahdi ibn Maymoon to ibn Mas'od and has narrators of Sahih Muslim as stated in the comments. In another copy the commentator says that except with Shayban ibn Farukh شيبان بن فروخ who's a narrator of imam Muslim's Sahih it would fit the conditions of al-Bukhari too -see the hadith here and the comment in the next page-. The addition is the following conversation between ibn Mas'ood and one of his visitors:

قال: فقال رجل من القوم: قرأت المفصل البارحة كله، قال عبد الله: هذا كهذ الشعر، «إني لأحفظ القرائن التي كان يقرؤهن رسول الله صلى الله عليه وسلم ثمانية عشر من - المفصل، وسورتين من آل حم»
One among the people said: I recited all the mufassal surahs during the night. 'Abdullah said: (You must have recited them) like the (recitation) of poetry. I heard (the Holy Prophet) combining (the sarahs) and I remember the combinations which the Messenger of Allah (ﷺ) made In the recitation (of surahs). These were constituted of eighteen mufassal surahs and two surahs (commencing with) Ha-Mim.
(Source of the translation: The version from Sahih Muslim on sunnah.com)

In fact Muslim complied it in his Sahih. While al-Bukhari mainly only compiled this addition in his Sahih via abu an-Nu'maan instead of Shabyan ibn Farukh.

So except with the teacher of ibn as-Sunni, who seems unknown (but could be reliable) we have a reliable chain of transmission here.

38 - حدثنا الحسين بن محمد، أخبرنا أبو داود، حدثنا أبو قتادة، حدثنا أبو الورقاء، حدثنا ابن أبي أوفى، قال: كان رسول الله صلى الله عليه وسلم إذا أصبح قال: «أصبحنا وأصبح الملك لله عز وجل، والحمد لله، والكبرياء والعظمة لله، والخلق والأمر، والليل والنهار وما سكن فيهما لله عز وجل، اللهم اجعل أول هذا النهار صلاحا، وأوسطه نجاحا، وآخره فلاحا، يا أرحم الراحمين» (Source)
We were informed by al-Hussayn ibn Muhammad from abu Dawod from abu Qatadah from abu al-Warqaa' from ibn abu 'Awfa who said: the Messenger of Allah Allah's prayers and blessings be upon him used to say in the morning: "We have reached the morning, and in the morning the dominion belongs to Allah; praise is due to Allah; majesty and might belong to Allah; the creation, the command, night and day and what is at rest by night and day belong to Allah. O Allah, make the beginning of this day uprightness, its middle success, and its end attainment, O most merciful among those who show mercy."

See also in Mishkat al-Masabih, here #296 in at-Tabarani's a-Du'aa', here #531 in 'Abd ibn Humayd's عبد بن حميد الكشي Musnad (which is the one root of the narration on which ibn Hajar narrated it from his teachers) and here in Mosannaf ibn abi Shaybah with a different chain and slightly different wording.

Again at least 6 teachers of ibn as-Sunni could be called al-Hussayn ibn Muhammad. However this time the majority of them are reliable hadith transmitters.

Imam an-Nawawi remained silent on the qualification of this hadith in his al-Adhkar (see here #226). While al-Arnaoot qualified the isnaad as da'if in his commentary.

So this hadith was also reported by at-Tabarani and beside abu al-Warqaa' which al-Haythami declared as matrook (rejected) in his al-Majma', there's abu Qatadah which al-Albani regarded as matrook too and which lead to the grading of the hadith as da'if jiddan.

Ibn Hajar mentioned the hadith in his Nata'ij al-Afkar Volume 2 pages 402-403 and declared it as gharib and it's sanad as da'if. He identified the weakness in Fa'id or Fayid also known as Fa'idah ibn al-Warqaa' who's the son of 'Abdurrahman al-'Attar so he is also referred to as Fayid ibn 'Abd ar-Rahmaan al-Madany فايد بن عبد الرحمن المدني and there's agreement on his weakness among scholars (see in the database). Ibn Hajar quoted that imam Ahmad regarded him as matrook (rejected), al-Bukhari munkar al-Hadith, abu Hathim ar-Razi stated his hadith is baatil (~fabricated). However ibn 'Ady in his al-Kamil concluded despite the negative grading that his hadith can be written (see here and the preceding pages). Note that ibn 'Ady quoted two of his narrations one of them is our hadith in question.

This chain of transmission seems tough to check, because of many ambiguities. If we assume that abu Dawod refers to the known author of the Sunan and Maraaseel I still would have an issue on identifying abu Qatadah without the input of al-Albani who identified him as 'Abdullah ibn Waaqid al-Haraani.

So this hadith has a severe issue in the chain of transmission which is abu al-Warqaa' whom's reports on the authority of 'Abdullah ibn Awfa are regarded as fabrication by many scholars, even the rather lenient al-Hakim from Nishapure (author of al-Mustadrak) says so. Beside this Qatadah is mainyl accused for his bad memory and issues in his reports which make the two an issue for this narrator chain. It is however understandable that a young student as abu Dawod was, would consult a known faithful scholar and worshiper as abu Qatadah was described as to learn hadith after excelling the qur'an.

Nevertheless the first part of it:

أَصْبَحْنَا وَأَصْبَحَ الْمُلْكُ لِلَّهِ رَبِّ الْعَالَمِينَ
We have reached the morning, and in the morning the dominion belongs to Allah, the Lord of the universe.

has a backup in the Sahih as one may read in Sahih Muslim. And in a hadith graded as da'if by al-Albani in Sunan abi Dawod.

In the given case I'll rely mainly on this article on alukah -in which the author claims this hadith to be da'if jiddan (very weak)-, but I'll add the (correct) sources (and additional sources if available in the same reference) which were referred to.

121 - حدثني عمر بن سهل، حدثنا نجيح بن إبراهيم، حدثنا إبراهيم بن محمد بن ميمون، حدثنا صالح بن أبي الأسود، عن عبد الملك النخعي، عن ابن جدعان، عن أنس بن مالك، رضي الله عنه قال: كان مقامي بين كتفي النبي صلى الله عليه وسلم حتى قبض، فكان يقول إذا انصرف من الصلاة: «اللهم اجعل خير عمري آخره، وخير عملي خواتمه، واجعل خير أيامي يوم ألقاك» (Source)
I was informed by 'Umar ibn Sahl, from Najeeh ibn Ibraheem, from Ibraheem ibn Muhammad ibn Maymoon, from Saalih ibn abi al-Aswad, from 'abd(u) al-Malik an-Nakha'iy, from ibn Jud'aan from Anas ibn Malik may Allah be pleased with him said: My placement was between the shoulders of the Prophet, may Allah's prayers and blessing be upon him, until he died.
He used to say when he finished the prayer: "O Allah, make the best of my lifespan the last of it, and the best of my deeds the last of them, and make the best of my days the day I meet You"

The hadith also appears in at-Tabarani's al-Awsat in #9448 (as a part of a du'a of an 'A'arabi (bedouin) which the prophet() heard, with the exact wording of ibn as-Sunni) and #9411 -with a deviation in the wording- (this was the root of ibn Hajar in Nata'ij al-Fikr) and (Isma'il ibn Muhammad) al-Asbahani's at-Targheeb wa at-Tarheeb #1317 (not 317 as in alukah) who rather attributed the statement to abu Bakr.

Imam an-Nawawi remained silent on the qualification of this hadith in his al-Adhkar (see here #196). While al-Arnaoot qualified the isnaad as da'if in his commentary.

The above mentioned article mentions three issues in the hadith:

At-Tabarani commented on #9411 saying none reported it from abu al-Muhajjal except with 'Abdu al-Malik ibn al-Hussayn and it was only reported -this way- by abu Bakr ibn abu an-Naddr. Ibn Hajar commented the narrator chain of at-Tabarani that abu Bakr ibn abu an-Naddr and his father abu an_Naddr are known teachers of imam Muslim while his grandfather Hashim ibn al-Qasim هاشم بن القاسم is a man of the two sahihs, as for abu al-Muhajjal, ibn Ma'iyn accepted him as trustworthy, and the teacher of at-Tabarani Haytham ibn Khalaf is also trustworthy and so is the son of Anas's brother (his name is Hafs حفص), the only remaining narrator who is abu Malik an-Nakha'iy and he is weak by agreement and there's a difference of opinion about his narration from his teacher (referring to 'Abdu al-Malik ibn al-Hussayn). I hope this is the correct translation of his statement -if not please anyone guide me-:

As al-Qassim ibn al_Waleed القاسم بن الوليد didn't even meet Anas ibn Malik () the version from the book of al-Asbahani has a disconnected chain of transmission.

Not the answer you're looking for? Browse other questions tagged hadith dua authenticity uloom-al-hadith dhikr .