What is the definition of nearest country for prayer timing where day length is very long?

This question asks about how to handle prayer times in countries where days length is very long, the accepted answer says

My question is what is the definition of the nearest country where daily prayer timings can be distinguished from one another. For example if I live in Tromso, Finland, a day can be 20 hours long, after weak it will be 22 hours and then the sun never sits. So what will be my prayer timings? Check this video which kind of explains how sun looks like in such regions. 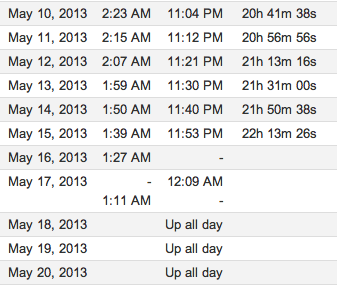 Strictly speaking, does 20 hours sun day counts as a valid day. Also consider that we have to fast for this length of time also (unless there is another judgment on that).

This is a matter on which there is a difference of opinion (as is the matter of praying in the abnormal zones as a whole), and there is no single "right" definition; the simplest answer would be to pray according to the times of your local Islamic community, by whichever understanding they choose to follow.

The timings of the five daily salawat by the sun are well-known. In the abnormal zones, determining these times is based on being able to clearly delineate between them; when this is not possible, the nearest land in which they can be clearly delineated (and wherein there remains sufficient time to perform the salat) is to be used.

During the winter in the abnormal zones, one may have periods in which the sun does not rise (either partially or in full) for multiple days. The timings for maghrib, isha and fajr are easily determined by normal means, however given that both the dhuhr and asr salat are to be done in the latter half of the day (between mid-day and the beginning of sunset), one needs a clear period of time in which the sun is fully risen for long enough to perform both salawat.

On the opposite side of the spectrum, during the summer the abnormal zones may go for multiple days in which the sun does not set (either in full or in part); the inverse case thus applies. Calculating dhuhr and asr is simple, but one needs to be able to clearly delineate between maghrib, isha and fajr, all three of which are to be done after the sun has fully set. Again, the same basic principle applies wherein there needs to be enough time to perform each salat in its designated time. One point of dispute is whether the concession to combine maghrib and isha salawat should be taken into account:

SIDE NOTE. Think for a moment about how the regular 24 hour day/night changes to 1 year day/night at the poles? Does it change continuously in the sense that we would have e.g. large areas with 48 hour days/nights, large areas with 72 hour days/nights, large areas with a week long days/nights and etc. or all occur in a very small region where the day/night length increases very sharply near the poles such that a small area around the poles are only problematic and that's almost a singularity in the sense of math? I would say it is almost like a singularity. However, this singularity is easily removable simply by assigning to its day/night period a number that matches the two limits on the sides, and that's what Islam also orders to: using the timing of the nearest city.

UPDATE. If all the timings that are required for praying and fasting is not available in a place within 24 hours, then I can say you still should seek for a nearest CITY that has all and follow its timing in your own place, since your place still is like a singularity over the Earth ;D. By the way, by "required" I mean "the least required", and the minimum required might change from a Sect to another although I am not certain about it right now.

Not the answer you're looking for? Browse other questions tagged fatwa prayer-timings .

15
How are praying times handled in countries with a long day light?

1
Why is Dhuhr prayer time always the same 13:20 in my country?
2
What is the ruling for the person who neglects prayer on Friday?
5
What is the best time for optional night prayer?
1
Do we have to pray as soon as the time for prayer comes?
2
What is the time limit for Fajr prayer?
0
Is knowing the prayer timing an essential for salah?
1
What time to pray the Sunnah prayer before fard?