Are these narrations of Ibn as-Sunni authentic? (Part 2) 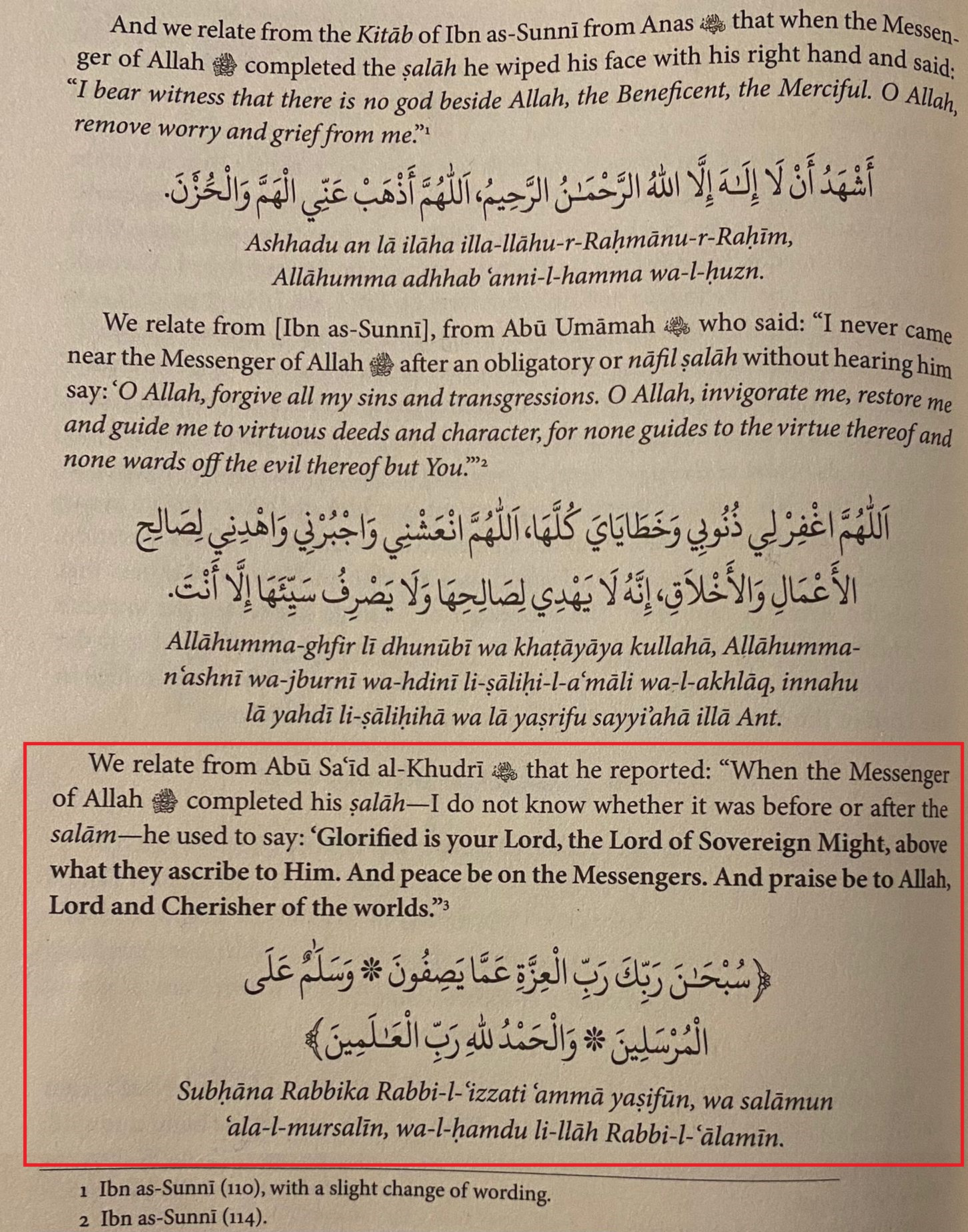 Edit: The narration, which is contained in the red box, has been answered by @UmH in the comments.

Following the suggestion from @Medi1Saif regarding this post. Hereinafter, these adhkar (in parts) are taken from the book of Imam An-Nawawi, which have no mention of any commentary or authentication. Furthermore, throughout my research on the internet, I have not found any information regarding these two ahadith of Ibn as-Sunni.

I will follow the same procedure as in my answer on Are these narrations of Ibn as-Sunni authentic? (Part 1). Just for your information the typical chronology of my research procedure however is searching for the hadith in ibn as-Sunni's book, checking the narrator chain then checking the authenticity qualifications of scholars. This needs to be said in order to avoid a misunderstanding due to some possibly wrong or strange commentaries (my own conclusions or guesses) when presenting the narrator's biographies.

In ibn as-Sunni's book 'Amalu al-Yawmi wal-Laylah the hadith appears under the chapter of what one says after the prayer of as-Sobh (fajr fard):
Please note in the following I'll be translating from Arabic language, as these translations are of my own take them carefully!

It seems that at-Tabarani quoted the hadith in his al-Majma' al-Awsat. And it was also compiled by abu Na'im in his al-Hilyah and further in al-Amali. But they all rather quoted the supposed weakness of Zayd al-'Ammiy and remained silent about others.

This hadith assuming it has any authentic qualification could be used as an evidence for wiping the forehead after the prayer (to make it clear at this stage already: this is not confirmed). The wording of the du'a has no issues nor conflicts with the qur'an or sunnah.
The main issue as it seems to me is the related act: wiping the forehead and the "timing": after (each) a prayer. Both appear also in as-Silsilah a-Da'ifah from a hadith compiled by at-Tabarani in al-Awsat, which ibn Hajar also addressed and got the same qualification: hadith #660 which has a difference in the wording of the du'a:

An-Nawawi mentioned this hadith in his al-Adhkar (see #193 here) without leaving a qualification. While al-Arnaout added the comment: that this isnaad is da'if (which will become clearer when we check our narrator chain).

Ibn Hajar al-'Asqalani quoted many sources and versions of this hadith and added to the commentaries of abu Nu'aym (who regarded this hadith as a strange narration reported via Mu'awiyah ibn Qurrah) and others the most important statement that the version of ibn as-Sunni is very weak due to Sallaam al-Mada'iny (at-Tawyl). See here an edited page from Nata'ij al-Fikr (Vol2/ page 301) 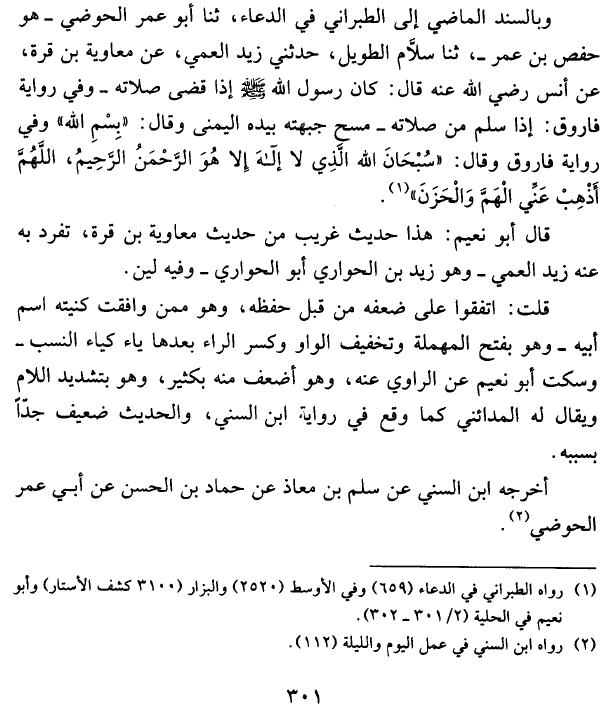 Al-Albani quoted in his as-Silsilah a-Da'ifa at least two versions #1058 and the longer #1059 which he declared both as fabricated (#1058 -which is our discussed hadith- due to Sallam al-Mada'iny also known as at-Tawyl -the tall- and #1059 due to Dawod ibn al-Muhbar who fabricated a whole book called "al-'Aql" العقل. Therefore a-Dhahabi regarded this hadith reported via him in Sunan ibn Majah as a blot for this hadith compilation) and said it is da'if jiddan.

So beside the issue claimed above certainly the huge doubt of this being correctly attributed to the prophet () or even as a report on the authority of Anas ibn Malik () is making this very weak.

Again here the wording of the du'a is in no conflict with the teachings of the qur'an or sunnah (see for example in Sahih Muslim). The hadith also appears in at-Tabarani's al-Kabir see in #7811, #7893 on the authority of abu Umamah (). And in #3875 on the authorithy of abu Ayyub al-Ansary ().

Imam an-Nawawi mentioned the narration without any further commentary in his al-Adhkar (see #194 here). Al-Arnaout however commented it saying: It's isnaad is weak. 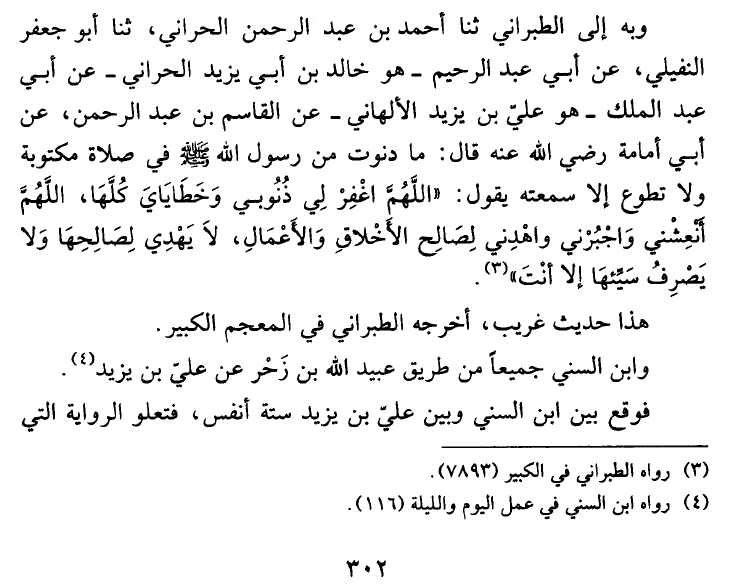 His first statement about the hadith is that it is gharib (strange) however he added also: abu 'Abd ar-Raheem (apparently appears in a the narrator chain of at-Tabarani) is agreed upon to be qualified as of a certain trust. While 'Ubayd ibn Zahr (in the version of ibn as-Sunni) is qualified to be da'if by more people than those who disagreed. And their teacher 'Ali ibn Yazid (Al-Alhaany) is agreed to be qualified as da'if and all narratives of this hadith go back to him.

There is another version of the hadith compiled by at-Tabarani which doesn't include the words:

Which al-Haythami commented it saying it's narrators are narrators of the sahih except with az-Zubayr ibn Khareeq الزبير بن خريق who is trustworthy (See here or here, however the hadith narrated via az-Zubayr ibn Khareeq doesn't include the first part of the du'a at all as you may see here).But ibn Makula said he (ibn Khareeq) has some weakness and has not much narrations. Abu Dawod only mentioned one hadith reported via him (see here) and commented it (maybe in a different work) that he doesn't regard him as a good narrator. And this was the opinion of ibn Hajar and Mughlatay.

My interpretation is that al-Albani might have qualified the hadith as hassan due to the many different narratives supporting it and maybe he restricted it on the last part of the hadith (it would be then hassan lighayrih). This might be a good guess, as in his book he only quoted ahadith contents with a one word qualification without any details and the qualification is not specific for the version of ibn as-Sunni, rather it also includes the versions on the authority of abu Ayub al-Ansari ().

In this chain we have many narrators which have an ambivalent qualification however already the teacher of ibn as-Sunni is rather unknown, so on the whole it is pretty much clear why the version of ibn as-Sunni should be regarded as very weak. However there are versions or narrations that support it and could rise it to the level of an acceptable (da'if) or maybe even hassan hadith, but this would be a different topic.