Are these narrations of Ibn as-Sunni authentic? (Part 1) 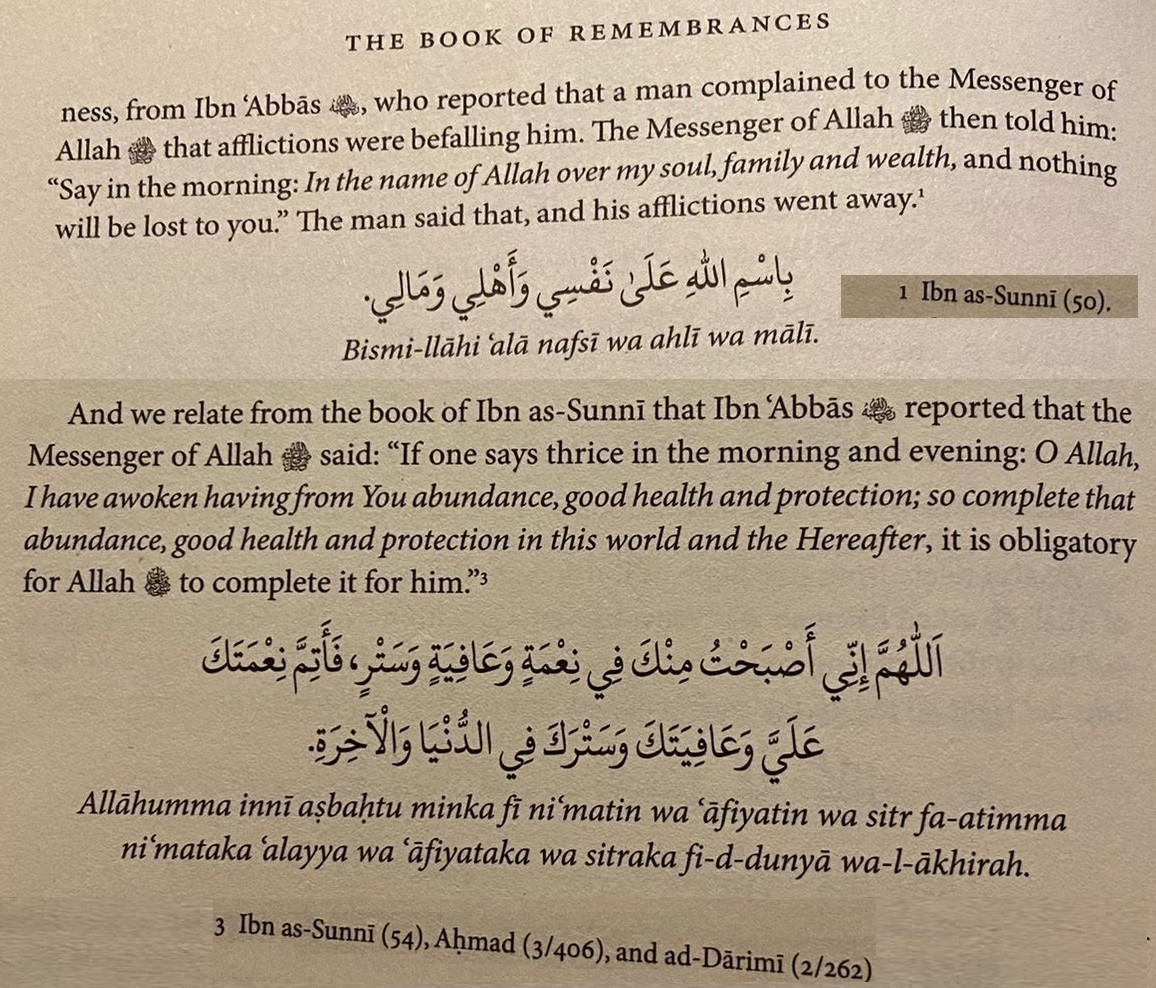 Following the suggestion from @Medi1Saif regarding this post. Following adhkar (in parts) from the book of Imam An-Nawawi, which have no commentaries or authentications and throughout my research on the internet, I have not found any information.

I will try to present the full hadith from the book 'Amal al-Yawmi wa-al-Laylah عمل اليوم والليلة of ibn as-Sunni (one of imam an-Nasa-i's students) with the full isnaad and give some information about its qualification from some available sources. And try to give an overall qualification of the narrators (therefore the full isnaad will be mentioned).

Let's start with the first narration:

In the following I'll be translating from Arabic language, as these translations are of my own take them carefully!

51 - أخبرنا عبد الله بن زيدان، أخبرنا أبو كريب، حدثنا زيد بن الحباب، حدثنا سفيان، عن رجل، عن مجاهد، عن ابن عباس، رضي الله عنهما أن رجلا، شكا إلى رسول الله صلى الله عليه وسلم أنه يصيبه الآفات، فقال له رسول الله صلى الله عليه وسلم: " قل إذا أصبحت: بسم الله على نفسي وأهلي ومالي، فإنه لا يذهب لك شيء " فقالهن الرجل؛ فذهبت عنه الآفات (Source)
We were informed by 'Abdullah ibn Zaydan, who was infromed by abu Kurayb, from Zayd ibn al-Habbaab, from Sufyan, from a man, from Mujahid from ibn 'Abbas, may Allah be pleased with both of them, that a man complained to the Messenger of Allah, Allah's prayers and blessings be upon him, that afflictions were befalling him. The Messenger of Alla, Allah's prayers and blessings be upon him, told him: "Say in the morning: In the name of Allah over my soul, family and wealth, and nothing (that belongs to you) will be lost to you." The man said that, and his afflictions went away.

As we already see in this isnaad a person is not named, so the narrator chain has an unknown which already make it weak unless some other one could name the missing person and support the given narration. This apparently seems not the case, as al-Arnaoot left no comment on this hadith in al-Adhkar as you may see later, but Allah knows best.

Some qualifications or analysis of scholars on it

... وروينا فيه بإسناد ضعيف
We reported in it (referring to the book of ibn as-Sunni as all prior narratives an-Nawawi mentioned were sourced back to this book) with a weak isnaad ...

Ibn Hajar al-'Asqalani again used this narration for some ciriticism on an-Nawawi in his Nata'ij al-Afkaar نتائج الأفكار (Volume 2 page: 410), I will only address/translate some points, here as he didn't qualify the hadith: 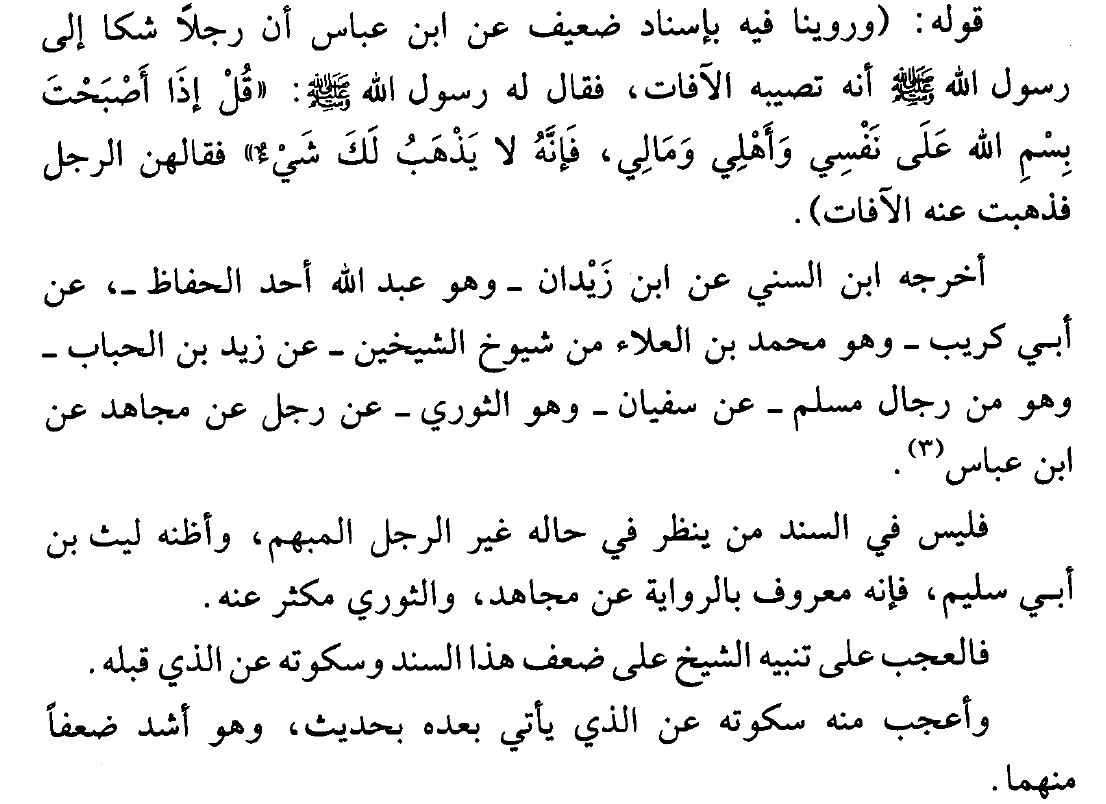 قلت: وهذا إسناد ضعيف؛ من أجل الرجل الذي لم يسم.
I say: This isnaad is weak, due to the man who was not named.

Al-Albani qualified another version of this hadith from ibn as-Sunni's book (also reported by ibn 'Ady) similarly as stated here #6038.

Some qualification and analysis of scholars

As stated above imam an-Nawawi remained silent on this hadith (which is #232 in the same link above) and so did al-Arnaoot. While ibn Hajar considered it even weaker than the one discussed earlier!

Al-Albani considered it as a fabrication and here are most of the details from his as-Silsilah a-Da'ifah (see here #6070):

As we see beside ibn Hossayn who is the major issue in this chain already the teacher of ibn as-Sunni might be another issue here. As he didn't seem to have reported many ahadith, so that a qualification of his reports and memory is difficult.

6
Are there commentaries of Hadith collections outside the 7 most known books?
3
Are these 2 hadithes about harming and questions on day of judgement authentic? Who are Darussalam and are they reliable? Why contradict with Islamqa?
1
Confusing statements regarding the hadith in At-Tirmidhi, is it hasan gharib or hasan sahih?
1
Is it ok (or bida') to recite these two dhikr in daily basis?
2
Are these narrations of Ibn as-Sunni authentic? (Part 2)
1
Are these narrations of Ibn as-Sunni authentic? (Last part)
1
Is this narration also authentic for the morning?