Confusing statements regarding the hadith in At-Tirmidhi, is it hasan gharib or hasan sahih?

There is a hadith narrated in At-Tirmidhi and it states that it is hasan gharib.

Thawban (ra) said: “The Messenger of Allah (ﷺ) said: ‘Whoever says when he reaches the evening: “I am pleased with Allah as (my) Lord, with Islam as (my) religion, and with Muhammad (ﷺ) as (my) Prophet (Raḍītu bi-Llāhi rabban, wa bil-Islāmi dīnan, wa bi-Muḥammadin nabiyyan) it is a duty upon Allah to please him.’” (Hasan Gharib)

But in the book of An-Nawawi (Kitab al-Adhkar - Book of Rememberances), I am reading this: 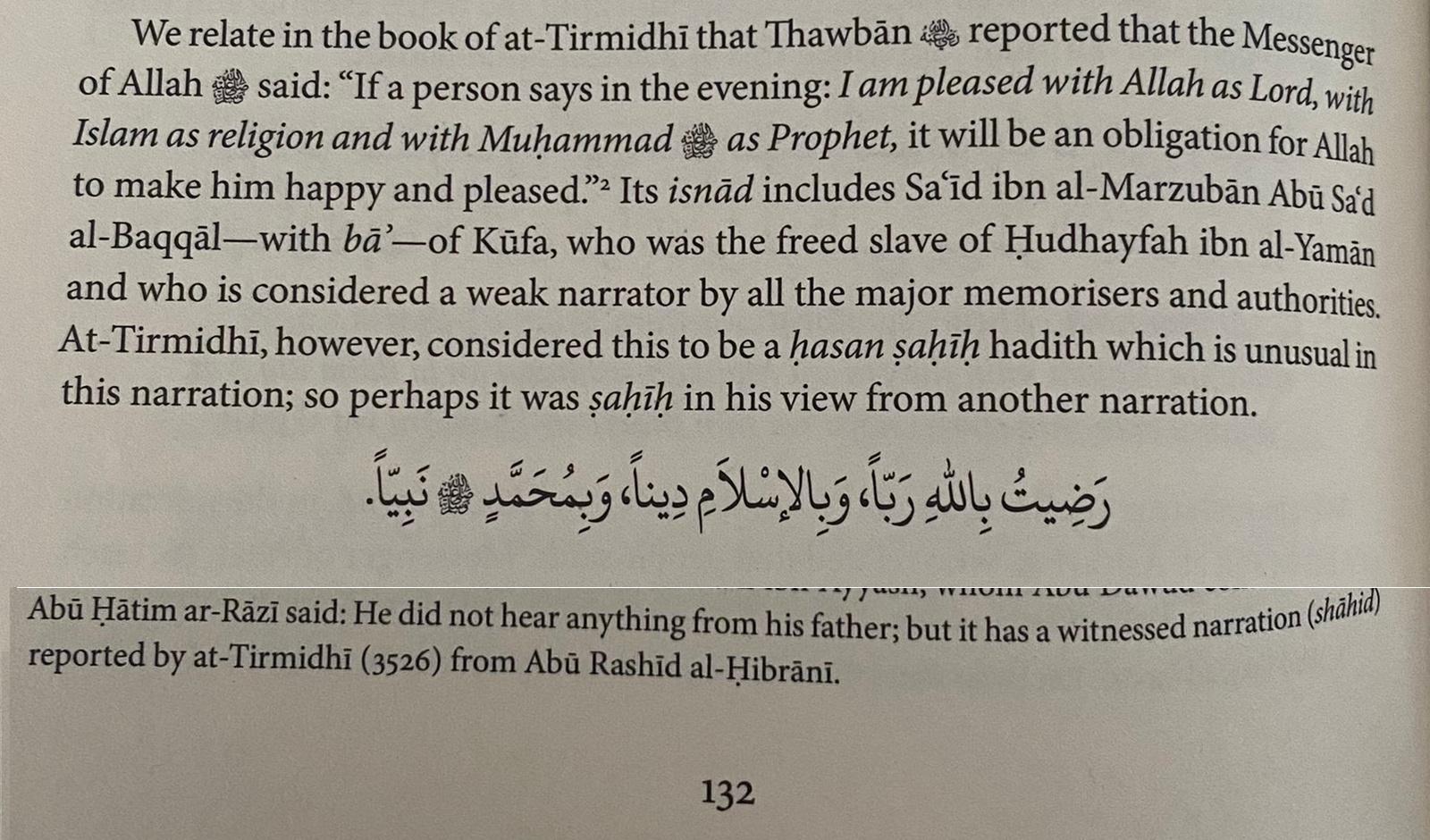 "Its isnad includes Said ibn al-Marzuban Abu Sad [...] who is considered weak[, ...] however, [He] considered this to be a hasan sahih hadith which is unusual in this narration; so perhaps it was sahih in his view from another narration."

Those are confusing statements to me, and I would like to know if there are further information or commentaries regarding this issue from other scholars?

You've already posted a question about a hadith were you were in doubt about imam at-Tirmidhi's statement Dhikr for which Allah forgives sins in the day and night, hasan or gharib (commentary)?. While investigating I found ibn Hajar commenting on a comment of imam an-Nawawi -apparently in his al-Adhkaar- as imam an-Nawawi there stated that the sanad of abu Dawod's version was good, which made ibn Hajar correct it saying he might have some reasons to do so, however ... and he counted issues in the hadith.

Here again an-Nawawi claimed that at-Tirmidhi declared this as hassan saheeh ghareeb in this version -see here in al-Adhkaar- (the translation in your provided image however deviates from this). However at-Tirmidhi actually didn't use the term sahih (sound) here at all.

It is unclear to me, why imam an-Nawawi said so. Sheikh al-Arnaout for example said that imam an-Nawawi's statement about Sa'id ibn al-Marzuban ibn Sa'ad al-Baqqal was considered weak by a majority of scholars and there's no such an agreement as the expression of an-Nawawi may indicate.

Hassan in the terminology of at-Tirmidhi

Note that imam at-Tirmidhi as stated in an earlier answer already wrote two sentences explaining what he means when qualifying a hadith as hassan:

قَالَ أَبُو عِيسَى وَمَا ذكرنَا فِي هَذَا الْكتاب حَدِيث حسن فَإِنَّمَا أردنَا بِهِ حسن إِسْنَاده عندنَا كل حَدِيث يرْوى لَا يكون فِي إِسْنَاده من يتهم بِالْكَذِبِ وَلَا يكون الحَدِيث شاذا ويروى من غير وَجه نَحْو ذَاك فَهُوَ عندنَا حَدِيث حسن
(source)
Abu 'Isa (at-Tirmidhi) said: As for what we mentioned in this book is a hassan (good) hadith we only mean with it that its has a good chain of transmission. With us this is every hadith that is narrated that does not have in its chain of transmission those who are accused of lying, and that the hadith is not irregular (shaadh) and that is narrated without a wording (or version) that is similar to that of yours.

In other words: Any hadith that

could fall in this category.

Also note that hassan sahih in the terminology of imam at-Tirmidhi isn't an indicator that the hadith is of good level of authenticity. So it can hardly be regarded as hassan.

Other narrations of the hadith

Not the answer you're looking for? Browse other questions tagged hadith hadith-interpretation authenticity .

1
Dhikr for which Allah forgives sins in the day and night, hasan or gharib (commentary)?

2
Contradictory hadiths on the most beloved individuals to the Holy Prophet in Jami at-Tirmidhi
1
Paradise lies beneath your mothers feet Hadith shirk?
3
What is an example of a hadith that is sahih in chain but not sahih in content?
1
Regarding the hadith below, and the ayah [23:5-7]
1
Dhikr for which Allah forgives sins in the day and night, hasan or gharib (commentary)?
1
Is it ok (or bida') to recite these two dhikr in daily basis?
0
What is the meaning of this hadith about evil of darkening?