Is Christianity considered polytheistic or "of the book"?

Generally speaking or defined based on sect, is Christianity consider polytheistic (Mushrikeeen) or of the book (Ahl al-Kitāb)? Please answer with references, not opinions.

Although there are christians and jews that disbelieve and associate partners with Allah, it doesn't mean that they aren't the people who recieved the book, they are still the people of the book. 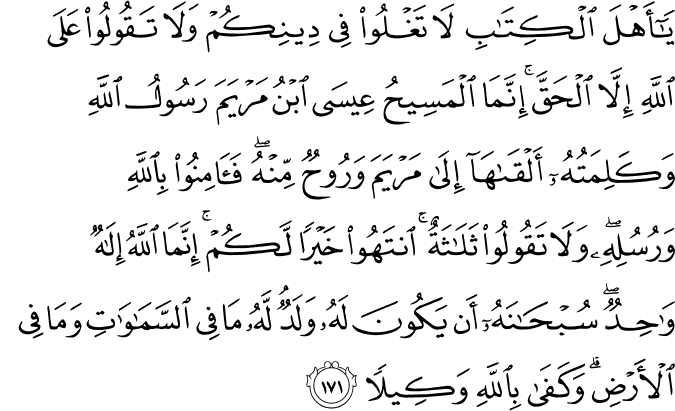 O People of the Scripture, do not commit excess in your religion or say about Allah except the truth. The Messiah, Jesus, the son of Mary, was but a messenger of Allah and His word which He directed to Mary and a soul [created at a command] from Him. So believe in Allah and His messengers. And do not say, "Three"; desist - it is better for you. Indeed, Allah is but one God. Exalted is He above having a son. To Him belongs whatever is in the heavens and whatever is on the earth. And sufficient is Allah as Disposer of affairs.

This Ayah came down in regards to groups of christians who said that Jesus is the son of of Allah/God Source.

Though these christians had disbelieved, Allah still called them People of the Book/scripture, Ahlul-Kitab. The christians are known as the lost ones, or the ones who gone astray (الضالين \ الضالون).

Say: O People of the Scripture! Stress not in your religion other than the truth, and follow not the vain desires of folk who erred of old and led many astray, and erred from a plain road. (77)

Christianity (and Judaism) are considered true Monotheist religions in Islam. They are not considered Mushrikeen or infidelas. They are in fact considered one true religion which was preached by two different prophets at different times. Quran 2:87

We gave Moses the Book and followed him up with a succession of messengers; We gave Jesus the son of Mary Clear (Signs) and strengthened him with the holy spirit.

Quran fully aknoledges that prophet Moses and Jesus (PBHP) were given scriptures books (Torah and Injeel). Most Muslim, however beleive, they are not in true form and has been altered in one way or another.

Prophet Moses and Jesus along with others have been mentioned below which shows that these are indeed messengers of God. Quran 2:136

Say ye: "We believe in Allah, and the revelation given to us, and to Abraham, Isma'il, Isaac, Jacob, and the Tribes, and that given to Moses and Jesus, and that given to (all) prophets from their Lord: We make no difference between one and another of them: And we bow to Allah (in Islam).

Muslims also believe that Jesus will come to this world because the end of the world. Quran 43:61

And (Jesus) shall be a Sign (for the coming of) the Hour (of Judgment): therefore have no doubt about the (Hour), but follow ye Me: this is a Straight Way.

There is sahib Bukhari hadith that says the same thing also

Narrated Abu Hurairah: Allah's Apostle said, "The Hour will not be established until the son of Mary (i.e. Jesus) descends amongst you as a just ruler, he will break the cross, kill the pigs, and abolish the Jizya tax. Money will be in abundance so that nobody will accept it (as charitable gifts)"

On a positive note

On a negative note

The following verse does encourages fighting against christians and Jews and required them to pay Jazya. They are not treated any different from non believers.

Fight those who believe not in Allah nor the Last Day, nor hold that forbidden which hath been forbidden by Allah and His Messenger, nor acknowledge the religion of Truth, (even if they are) of the People of the Book, until they pay the Jizya with willing submission, and feel themselves subdued.

The Quran was addressing the Christian and Jewish tribes in the Arabian Peninsula at the time of the Prophet (pbuh). At that time, both Christianity and Judaism were in a state of flux regarding the content of their scriptures and their doctrines. Gnostic beliefs and texts were more popular than texts accepted much later by Christian and Jewish authorities. While no one really knows what scriptures were held sacred by these Arabian tribes, scholars are certain that neither the canonized texts of modern Christians nor the Masoretic texts of modern Jews were available at that time. What can be affirmed is that any of these tribes who committed 'shirk' (assigned partners to Allah) like the Jesus, Mary, Holy Spirit (Trinitarians) worshipping Chrisitans and the Metatron worshipping Jews were considered to be mushrikeen (polytheists or associationists). Allah (swt) accuses them of Kufer in 5:17, so they are kufar:

They have certainly disbelieved who say that Allah is Christ, the son of Mary. Say, "Then who could prevent Allah at all if He had intended to destroy Christ, the son of Mary, or his mother or everyone on the earth?" And to Allah belongs the dominion of the heavens and the earth and whatever is between them. He creates what He wills, and Allah is over all things competent.

In 5:72, Allah condemns these associationists to Hell:

They have certainly disbelieved who say, " Allah is the Messiah, the son of Mary" while the Messiah has said, "O Children of Israel, worship Allah , my Lord and your Lord." Indeed, he who associates others with Allah - Allah has forbidden him Paradise, and his refuge is the Fire. And there are not for the wrongdoers any helpers.

Indeed, even the Jews were cursed to Hell by their own prophets according to 5:78:

Cursed were those who disbelieved among the Children of Israel by the tongue of David and of Jesus, the son of Mary. That was because they disobeyed and [habitually] transgressed.

It is only those Christians and Jews who believe in the Quran, worship Allah alone and obey Allah's laws that are considered to be believers (Q 2:62):

Indeed, those who believed (Muhammad) and those who were Jews or Christians or Sabeans [before Prophet Muhammad] - those [among them] who believed in Allah and the Last Day and did righteousness - will have their reward with their Lord, and no fear will there be concerning them, nor will they grieve.

The People of the Book that were considered to be believers were those that believed in the Prophet Muhammad and the revelation of the Quran:

003:199 And lo! of the People of the Scripture there are some who believe in Allah and that which is revealed unto you and that which was revealed unto them, humbling themselves before Allah. They purchase not a trifling gain at the price of the revelations of Allah. Verily their reward is with their Lord. Lo! Allah is swift to take account.

They have no protector besides Him, and nor does He share with anyone in His legislation. (Quran 18:26)

Indeed, those who disbelieved among the People of the Scripture and the polytheists will be in the fire of Hell, abiding therein eternally. They are the worst of creatures. (Quran 98:6)

Shirk is not always restricted to polytheism. The Qur'an clearly distinguishes between mushrikin and the Ahlul Kitab, even though many Jews and Christians also fell into shirk.

They have taken their scholars and monks as lords besides Allah, and the Messiah, the son of Mary. And they were not commanded except to worship one God; there is no deity except Him. Exalted is He above whatever they associate with Him. (Quran 9:31)

The Mushrikin used to believe in multiple deities. They were polytheists in the truest sense of the word, whereas the shirk of Jews and Christians was less obvious.