Why did Allah make me a psychopath?

I grew up completely non practising, borderline agnostic. However as of late I have came to Islam with full certainty. Looking back, it has been beautiful.

I’m aware that my question is rather black and white, but hear me out.

I literally can’t love anyone fully. I have extremely shallow emotions, I am cold and uncaring of other people in general, and have a ridiculous hunger for power. Religion detracts me from these things but it is still innate within myself. I am aware this life is a test but why is it in my nature to be everything Islam goes against?

I don’t understand. Will I get punished in the hearafter for traits I was born with?

We all make our choice in life. If a person is hungry while fasting and he wants to eat, he can't blame Allah for it. Similarly in life we can't blame the creator for anything. The book of destiny contains whats going to happen. It is because Allah is not bound in time. He knows what we will do. But the decisions are in our hands. Allah knows the best.

I once read a book entitled, "Thick Face, Black Heart". In this book, the author (a Chinese woman) was talking about the virtues of being callous and ruthless when dealing with certain situations that life throws at us, and she advocated that ANYONE who wants to be effective in the living of life must develop a certain measure of Thick Face, Black Heart (callous ruthlessness). When I first read the book I was in absolute opposition to her message, but, before I got even a quarter of the way through it, I found myself compelled to agree wholeheartedly with what she was saying.

You may be wondering, "well, what does that have to do with my question?" Everything.

What you describe as psychopathy (and view as inherently bad) is really an aptitude for the virtue of ruthlessness. It is NOT an inherently bad thing, brother. Stay with me here...

I remember reading a Hadith where the Prophet (alaihi salaam) said, "Even if Fatima hint Muhammad (his own beloved daughter) came to me guilty of stealing I would cut off her hand." After the Battle of the Trench, the Prophet ordered over 700 Jews who had been plotting treachery with the Meccans killed. In 24:2 of the Qur'an Allah orders that anyone found guilty of Zina (adultery/fornication) should be publicly beaten with 100 stripes. In the middle of the ayat Allah says, "do not let compassion move you in their case."

My point in citing the above references is to say that there are instances where the proper practice of Islam requires ruthlessness, which is lack of mercy and compassion.

Not only that, a lot of vocations call for the ability to remain objective and unemotional. Generals have to knowingly send their men into the teeth of death for the sake of good strategy. If he can't make the hard (ruthless) decision to lose those men he might end up losing the war, which is the much bigger loss.

Judges also must administer justice, and that sometimes means inflicting harsh punishments on people. Law enforcement, at times of major civil unrest, will have to be willing to drop the hammer on malcontents to quell the fitnat and restore order.

But, yes, we also need the capacity for love, mercy, generosity, kindness -- all of that, BECAUSE THAT'S A HUGE PART OF BEING A GOOD MUSLIM TOO. These virtues can all be cultivated. If they don't come naturally, just work at them. Just like war can turn a soft-hearted person into a cold-hearted killer, actively being kind to others can AND WILL develop within you stronger feelings of love, compassion, etc.

Dear brother! I spent much of my life fighting wars. I am a killer. But I believe in Allah and the Last Day so I do not inflict death of every person I encounter who I think needs it. I must be just. I must control the rage that sometimes threatens to break free. I must not allow that rage to control me. Likewise with you and your emotional inclinations. Control them. Allow Allah to guide you and He will make you whole in those areas of your personality where you think you are lacking. Our Lord does that.

"O' mankind! There has come to you a direction from your Lord, AND A HEALING FOR THE (DISEASES) IN YOUR HEARTS -- and, for those who believe, a Guidance and a Mercy." Qur'an 10:57

May Allah have mercy on us all, and help us turn our perceived minuses into plusses. As'salaamu alaikum akhi.

A fairly old question by a left user but since I know many people who have this exact problem I decided to answer this.

Well, Allah makes all sorts of creatures but the responsibility correlates with the degree of our God-given talents.

Allah does not charge a soul except with that within its capacity (2:286)

But as for this particular problem, I have seen people who have a good knowledge of Islam and do their best to adhere to Islamic rules and values, but there's no passion and emotion involved in their religious observance and life.

My understanding is that if the intellectual requisites for a lively religious practice (knowledge and faith) are really there, then the only source to look for problem would be lifestyle and psychological health.

So I would recommend reading three of my answers that I have written on psychology-related problems for religious observance where I make many notes on importance of mental health and life-style balance.

Then, as I have explained sins of all sort impact our physiological and psychological health. The impact by majors sins can be adverse and long-lasting. Now given the OP's agnostic background this might be a responsible factor unless it is really due to genetic makeup that they suspect. Now depending on the nature of the sin there can be specific remedies. The spiritual remedy, i.e. repentance is common to all but it is meant to eliminate the desire for sin in our being and inspire us to make up for the past, not directly addressing psychological and even physiological conditions caused by sin in our being. Therefore for specific remedies we need specific knowledge of the person, his life and health record.

Now since the OP has specifically suspected to have psychopathic traits and suggested it to be from his/her genetic makeup, there are bad and good news. Modern medicine doesn't reportedly have effective treatments for psychopathy. But then it has been recently proven that our genes change during our life. So we can say if a psychopathy case has genetic causes, there are chances that it can change and improve.

For each complexion and humor dominance there are physical and psychological signs in humans. Both black bile and yellow bile dominance are associated with skinny and dry looks. They are also associated with a very poor emotional life. This artistic depiction can give an idea of the general physical and psychological traits of the four typical complexions. The yellow and black bile complexion are the two men on the right even though the yellow complexion guy (the upper right) is depicted as more dry than skinny which detracts from an archetypal yellow bile. 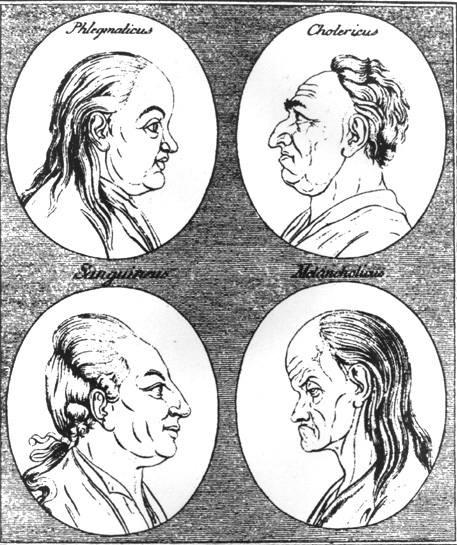 Yellow bile dominant individuals though are more likely to display psychopathic traits, with black bile individuals being quite the opposite: they tend to be submissive and meek but still having little emotions.

But like I said, there can be that the dominance only affects a certain organ of the body, here, the brain in which case the physical signs associated with general complexions would be absent.

In either cases, apart from life-style recommendations of an emotionally and spiritually balanced lifestyle (see my second linked answer), medial treatments include dietary reforms and central to that would be a substantial increase in one's routine fruit intake, specially sweet watery fruits like apples, grapes and carrot juice.

This type of food help with improved blood production and circulation in the body which positively enhance both mental functioning and emotional vibrancy.

So by knowledge of human nature, we can treat even many of the negative traits that we attribute to our inherited build or genetics and not think we are condemned to some "inherent" traits.

Not the answer you're looking for? Browse other questions tagged islamic-philosophy deeds qadar destiny or ask your own question.

2
Do waswas increase in evil and intensity with the increase of sins and decrease with the decrease of sins?
0
Dhikr isn't giving me dramatic improvement in all spheres of life. Why not?

4
Why is alcohol not permitted, if it requires the will of Allah to make you drunk?
2
Why did the Mu'tazila criticize kalam?
2
Did Allah arrange or choose what type of life we would have?
1
Why did Allah send more than one book to mankind?
1
Why did Allah create people when he already knew what was going to happen?
1
Why does Allah need to be good
2
Is sinning canceling good things we did?