Muslims try to reason with Christians that you cannot have two person in one because it is mathematically impossible. But sometime Christians come back with the argument, "is it not true that you can get Angels in the form of men, who are still angels". How would you counter this argument, or does the Quran and hadith support their claim that you can get 2 in 1, then possibly 3 in 1 as in the trinity which the church suggests.

That's not how it works. Angels when they appear as humans are only doing that: appearing. They have one true form and everything else is but an appearance.

They are not men and angels at the same time like the trinity states with God. The trinity says that the Father, the Son, and the Holy Spirit are different persons but are all one God. When angels are appearing as humans they are not two persons being the same thing, they are one angel seeming like a human.

Note that saying the same thing about the Trinity (God is only appearing as the Father, Son, or Holy Spirit) is heresy according to Christian doctrine. (Sabellianism)

An angel who appears in human form is still the same person, as is a Jinn who appears in the form of an animal. This is not what the Christian belief about God is, instead their belief is best summarized with this diagram called the "shield of trinity": 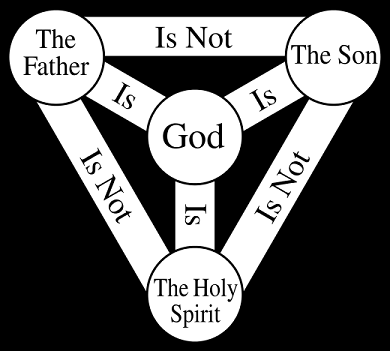 Christians believe that there are three distinct persons: The Father is not Jesus. Jesus is not the Holy Spirit. The Holy Spirit is not the Father.Yet all three are divine.

Not the answer you're looking for? Browse other questions tagged christianity .

7
Is it permissible for Muslims to join groups like Freemasonry?
4
Is Christianity considered polytheistic or "of the book"?
8
Nulify the gospels?
4
Did the events at the Tower of Babel occur?
6
If a Muslim man marries a Christian woman, what are the conditions for the wedding ceremony?
5
Are Christians who believe in the Trinity considered People of the Book?
3
Is it haram to marry a Christian woman even if she is chaste?
5
When did the Jews/Christians go wrong?
0
Counter-argument to Jesus being the God-Man?
4
Is there historical/scientific evidence that Jews and Christians altered the original message of God?