With respect to below question:

Did the Ghazwa happen or not?

As stated by @Uma in the comment the last part on whether or not the Ghazwa has already been fulfilled is opinion-based. Here two rather opposite opinions, even if the authors on islamqa #145636 assume that the hadith is referencing at a happeniung at the end of times:

What appears to be the case from the apparent meaning of the hadith of Thawbaan and the hadith of Abu Hurayrah – if it is saheeh – is that the conquest of India referred to will occur at the end of time, and at a time close to the descent of ‘Eesa ibn Maryam (peace be upon him), not at a time that was close to the era of Mu‘aawiyah ibn Abi Sufyaan (may Allah be pleased with him).

Al-Haafiz Ibn Katheer (may Allah be pleased with him) said:
The Muslims invaded India at the time of Mu‘aawiyah, in 44 AH, and there occurred things which will be explained below. It was also invaded by the great ruler Mahmoud ibn Sabuktagin, the ruler of Ghaznah who conquered India around 400 AH. He invaded the land, where he killed, took prisoners, and captured booty. He entered Somnath where he broke the greatest idol that they used to worship, and he captured its swords and necklaces. Then he returned, safe and victorious. End quote.
Al-Bidaayah wa’n-Nihaayah (6/223)

Hence al-‘Allaamah Hammood at-Tuwaijri (may Allah have mercy on him) said:
What is mentioned in the hadith of Abu Hurayrah (may Allah have mercy on him), which was narrated by Na‘eem ibn Hammaad, about the conquest of India has not happened up till now, but it will happen when ‘Eesaa ibn Maryam (peace be upon him) descends, if the hadith that says that is saheeh. And Allah knows best. End quote.
Ithaaf al-Jamaa‘ah (1/366)

Ibn Kathir said it has happened at the time of Mo'awiyah (Ummayyad dynasty), while the scholar Hammood at-Tuwaijiri said it has not happened and say it will happen when 'Isa descends which is a connection the first part of the linked fatwa couldn't support.

What actually is al-Hind

This article on islamstory.com gives a first explanation the region by the following:
In the following I'm translating from Arabic, as these is my own translation take it carefully!

The land of Sindh is the land which was surrounded by the river Indus which was formally known as Sindh. This river originates in the heights of Sindh and its mountains from the region of Qashmir Kashmir and and merges in the Sea of Sindh in the Indian ocean, And this land is borderd at west by Iran to the Himalaya range in the north-east leaving the subcontinent at its south and forms a major part of the country known by now as Pakistan.

By now we know that The parts around or south of the Indus were known as Hind (India). The book this article uses as one of its source the Atlas of the Islamic history أطلس تاريخ الإسلام shows by the maps inside it, actually that as-Sindh is more likely to cover parts of Pakistan and Afghanistan. While Punjab and Kashmir are clearly shown as part of al-Hind. The Wikipedia article on the Ummayyad campaigns shows that Bangladesh 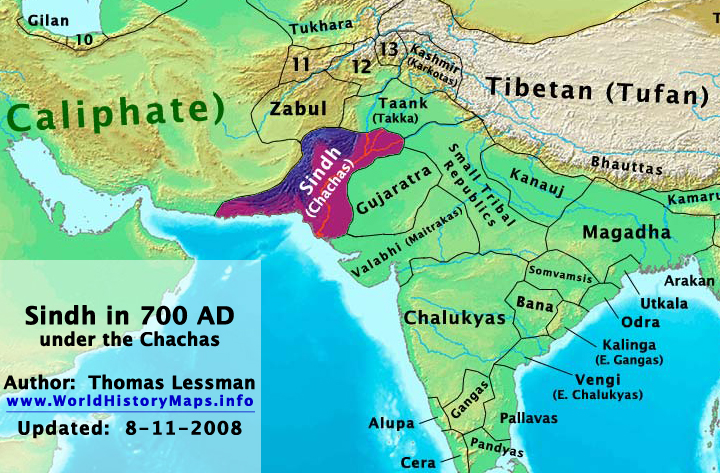 was also a part of al-Hind it leaves the impression that Buthan and Nepal were parts of it too. But that needs proofs (historians etc.). As we often also hear that the Muslims conquested al-Andalus meaning the whole Iberian peninsula which actually was not the case.. At these times defeating the enemy meant taking his land in possession, but it doesn't necessary means it was done 100%.

Not the answer you're looking for? Browse other questions tagged hadith practical-islam hadith-interpretation war .

1
Will the conquest of India not happen until towards the end time when Prophet Isa returns?
1
What is Ghazwa-e-Hind?

1
What is meant by "striking one another's necks" in the hadith
5
What is the difference between innovation in Islam and introduction in Islam?
4
Are there narration chains for the coccyx/tailbone hadith that don't go through Abu Hurairah?
1
Why two sahih hadiths contradict each other related to Quran 66:3?
1
Can a person get Jannahtul Firdaws by just reciting this after wudu, even if he doesn't do much good deeds?
2
Did the Prophet (SAW) have a sex slave?
0
Is it permissible to kill a slanderer of the messenger in a vigilante fashion, where killing the slanderer would break the law of the country?