Regarding the height of Adam (pbuh)

In this hadith, it is said that Adam (pbuh) was 60 cubits tall and since then men have been decreasing in stature. The hadith is as follows:-

The Prophet said, "Allah created Adam, making him 60 cubits tall. When He created him, He said to him, "Go and greet that group of angels, and listen to their reply, for it will be your greeting (salutation) and the greeting (salutations of your offspring." So, Adam said (to the angels), As-Salamu Alaikum (i.e. Peace be upon you). The angels said, "As-salamu Alaika wa Rahmatu-l-lahi" (i.e. Peace and Allah's Mercy be upon you). Thus the angels added to Adam's salutation the expression, 'Wa Rahmatu-l-lahi,' Any person who will enter Paradise will resemble Adam (in appearance and figure). People have been decreasing in stature since Adam's creation.

But according to this, the height of the ancient people and us are roughly the same.

Interestingly enough, our heights have been increasing rather than decreasing for the last 150 years.

So isn't the hadith above rendering scientifically inaccurate? If there's any problem in my question please inform me. Thanks!

This and this should help you in answering the question.

Alternatively, the hadith could simply be erroneous.

Our World in Data has a graph of human heights over time. 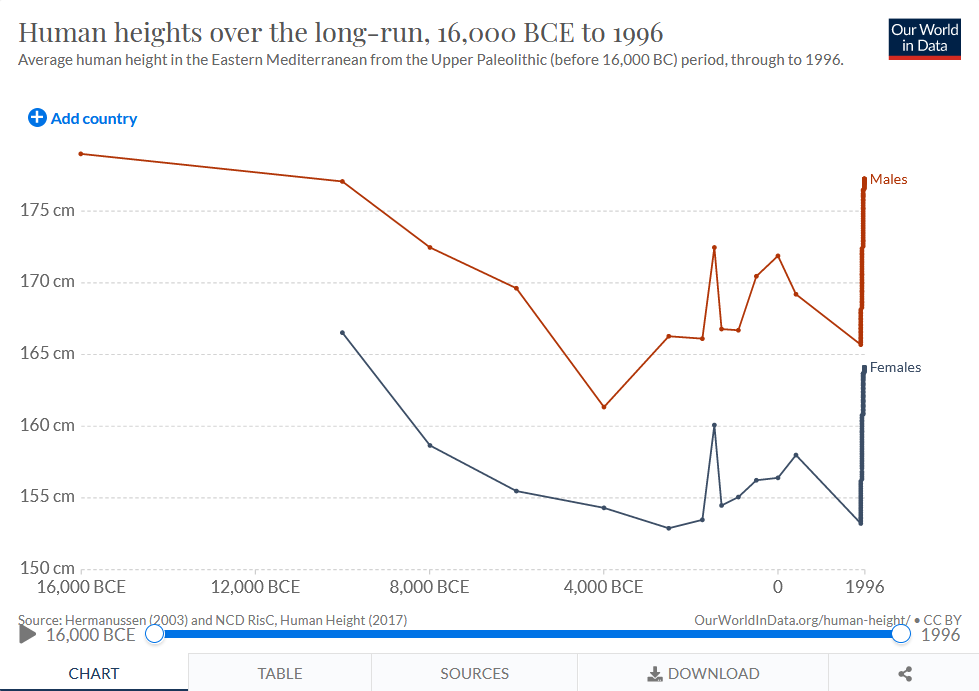 Not the answer you're looking for? Browse other questions tagged hadith hadith-interpretation prophet-adam .

7
How tall was Prophet Adam (PBUH)?
4
Bukari Hadith Reference
4
How is it possible that the coccyx does not decay at all? What if the body was cremated?
1
(Hadith Collection) Ibn Abi Hatim
2
What is the hadith mentioned in the ibn Kathir tafsir on Quran 7:172-174?
1
Did The Sahaba Prayed To The Prophet instead of Allah?
0
Was prophet Muhammed (PBUH) the only messenger to all mankind?
1
Does Islam Teach That The Earth Was Created Before Sun, Stars, Moon, Heavens, etc?
0
does the argument between Adam(PBUH) and Moses(PBUH) make it that Adam(PBUH) had no free will?