I am actually making a transition from the indo-pak script of arabic to the othmani script. In regards to surah ya-seen 36:9, the tashdeed is missing on the letter "wow" (in othmani script). Can someone explain me the rules when it goes missing? 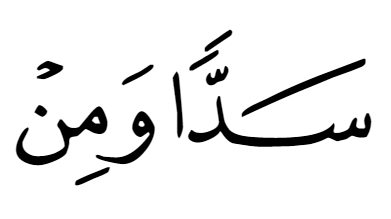 When you have the letter waw (و) following a tanween (تنوين), the rule is to apply idgham (إدغام). Idgham in recitation means pronunciation of both that tanween with a nasal n sound and the waw as separate letters. In the first form ('Uthmani), the tanween marks are not vertically aligned (there is a slight angle), which denotes idgham. In the second form (Indo-Pak), the tanween marks are aligned denoting a full n sound, but since the waw has a shaddah, then the n sound and the waw sound become joined in a nasal n sound.

Both sound exactly the same.

Not the answer you're looking for? Browse other questions tagged quran-recitation reading-quran tajweed or ask your own question.

1
What is the original reading?