What is the correct way to become Muslim?

I want to leave my religion and embrace Islam. I believe that there are no deities, no gods/goddesses, except the Supreme Being. I believe that God sent many prophets as His messengers for the uplifting of the human race, like Abraham, Moses, Jesus Christ, etc, but His Apostle Muhammad was His last Prophet and Messenger.

How do I accept Islam in the most appropriate way?

Judging from your post (which contains an English equivalent of the shahada), it's possible you're already a Muslim. However, it's expected to say it in Arabic.

The process is described here: How would I convert to Islam and become a Muslim?

There's not really a "correct" way: the important part is converting to Islam, not the environment it's done in. The recommendations are:

The main difficulty is becoming a good Muslim: a convert needs to learn how to pray. Ramadan starts in slightly over a month, where there's fasting and zakat. Converts often begin with much "zeal of the newly converted", but it's a challenge to stay strong over a long period of time.

There are YouTube videos showing people converting to Islam in mosques, such as: 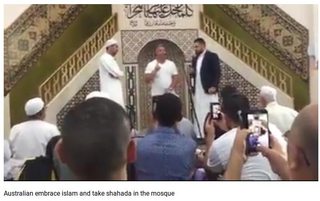 Australian embrace islam and take shahada in the mosque 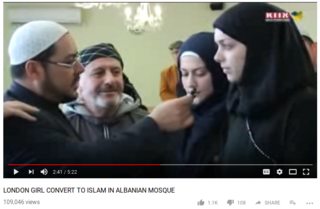 Not the answer you're looking for? Browse other questions tagged non-muslim conversion muslim-practices .

20
How would I convert to Islam and become a Muslim?
11
Do I need to convert in front of witnesses to become a Muslim?
4
Going from "never prayed in my life" to my first prayer?
1
Must Shahada be said in Arabic?