Why did Khan translate "ثَوْبِ" into "beds" in his translation of Sahih Bukhari?

I found this strange, considering the word appears 8 times in the Quran and in his translation, he never translates it as "bed".

Is it possible to translate "ثَوْبِ" as "beds"?

The hadith you are referring to is in Sahih al-Bukhari 2581, abridged to the phrase you are concerned about its translation:

Do not hurt me regarding Aisha, as the Divine Inspirations do not come to me on any of the beds except that of Aisha.

The interpretation is not entirely accurate as it should have been more like "the bed's sheet" or "the bed's cover" or the "the bed's blanket" rather than just "the beds".

As for the examples you have provided of the word thawb (Arabic: ثوب) to mean garment, they are indeed accurate, but not conclusive. The word thawb has a number of meanings in the Arabic language (highlighted), one of them is sheet(s). See Al-Maany and select the different drop-downs:

The cover of the Kaaba (the black decorated sheet of cloth covering the building) is also called thawb as per the reference above: 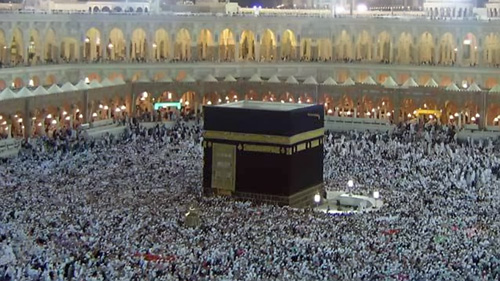 O Um Salama! Don't trouble me by harming `Aisha, for, by Allah, the Divine Inspiration never came to me while I was under the blanket of any woman amongst you except her.

Consider the following hadith for usage of ثوب as a blanket:

a man should not lie with another man under one covering

And, as explained in the other answer, there are variants of the hadith which use a different expressions to further clarify what type of cloth is meant:

By Allah, the Divine Inspiration never came to me while I was under the blanket of any woman amongst you except her

لحاف is defined by Lane's Lexicon:

and from Arabic-Englsih Dictionary by Hans Wehr:

Also Lane's Lexicon is clear that ثوب is often used to mean sheets of plain cloth, and may be used for any form of covering: 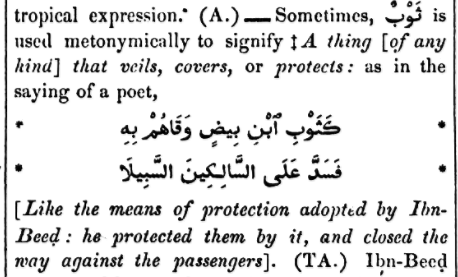 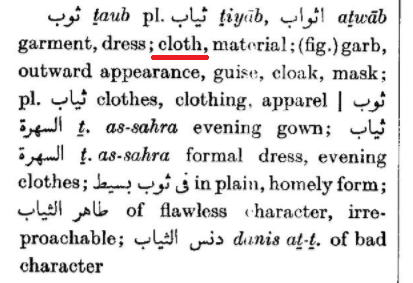 The idea propagated by anti-islamic polemics that clothing specific to the female gender is meant is rebutted by other hadith like:

Not the answer you're looking for? Browse other questions tagged arabic-translation sahih-bukhari .

3
What does "offer reals" mean in this hadith?
7
What is the proof to pray Dzuhur/Asr silently? ALLAH in Al-Quran says 17/110
4
Why is الْمُتْعَةِ translated as "Hajj-at-Tamatu"?
4
What do these parts of Bukhari trying to say?
3
Is this the correct translation of Imam ibn Taymiyyah's views on veiling?
2
Ahadeth about zakat which contradicts and confuse me a lot
1
What is the correct translation of the words of the Prophet SAW in Sahih al-Bukhari 24?
1
First written source in Isnad