what is this symbol on the alif character ? The pronounciation in different cases

I have recently shifted from the indo-pak style of quran to arab style. I get confused in the pronunciation of this type of alif

1) What is the symbol above alif called?

2) How should we pronounce it in different cases? (someone told its like silent) 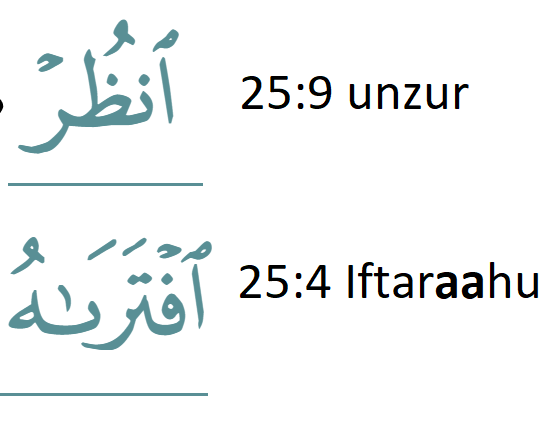 In other words, How do we know when to say 'oo' or 'e' or silent or any other cases for this symbol?

That is called hamzat al-wasl, which means that in normal cases the alif is, as you were told, silent. Some styles will write the symbol above the alif, but others will just leave the alif unmarked: It is the same either way.

However, if it's at the beginning of speech, you can't just leave it silent. How it's pronounced in those cases is a bit tricky, since it's based on exactly what word it's on:

So, taking the two examples in your question:

Note that if you're dealing with irregular verbs, it can be difficult to determine which vowel to use since as-written they won't always show the natural vowels. There are a handful of these in the Qur'an (e.g. "?qduu" in 10:71 or "?bnuu" in 18:21 would be pronounced with an "i" instead of the "u" you might expect) but I don't think any of them would be an issue since they're not at the beginning of a sentence and the hamzat al-wasl would be silent anyway.

5
How is hamzat-al-wasl pronounced at the beginning of an ayah?

24
What does Islam say about reading the Quran in a language other than Arabic?
12
What is the diamond mark printed in some mushafs in surah hud, verse 41?
6
Reciting Quran for personal goals, is this allowed in Islam?
20
What are the different punctuation in Quran?
3
What is this alif like sign?
1
The reward for reading khatem (finishing) Quran different in Ramadan?
3
What Should I Do When I See This Symbol in Quran
2
What is this punctuation mark?
2
What is the one instance of imala in Qalun al-Nafi'?