Is there a hadith "He who buys the stolen property, with the knowledge that it was stolen, shares in the sin and shame of stealing" and is it sahih?

I stumbled upon the following hadith, but I was unsuccessful in verifying it actually exists, and am unable to gauge its authenticity. 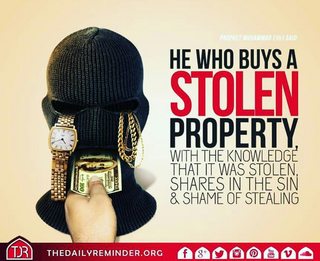 The Prophet of Allah Sallallahu Alahi Wasalam said, “He who buys the stolen property, with the knowledge that it was stolen, shares in the sin and shame of stealing.“ (Sunan Baihaqi)
Darul Ifta Birmingham

It is reported that the Prophet sallallaahu `alayhi wa sallam (may Allaah exalt his mention) said: "Whoever buys something stolen while knowing that it is stolen, then he has indeed shared in its shame and sin."
IslamWeb

Question: Does the above hadith exist, and is it sahih?

The hadith indeed is compilled in sunan al-Bayhaqi al-Kubra (via two chains he seems to mention to other chains of the hadith of Sufyan a-Thawri via at-Tabarani and abi Hatim, so maybe both have quoted it in some of their books too, I could find a quote here that it is in at-Tabarni's al-Kabir with a slightly different wording), al-Mustdrak of al-Hakim (on the authority of abu Hurraira) and ibn abi Shaibah in his mossanaf (on the authority of some of the people of Madina -which creates doubts on the authenticity) it is also present in the musnad of Ishaaq ibn Rahawayh (via two chains -here with the same chain as in al-Mustadrak-) and in ibn 'Ady's al-Kamil (with a third chain):

the issue with the first chain

(like in al-Mustadrak) is: Muslim ibn Khalid مسلم بن خالد he was one of the teachers of imam a-Shafi'i (in fiqh and hadith) his hadith is rejected by al-Bukhari, ibn al-Madini and many ahadith among them this one also by imam a-Dhahabi. Abu Dawood considered him as da'if while ibn abi Hatim considered him as none to rely on, ibn 'Ady however said his hadith is Hassan and hopefully fine, ibn Ma'yn considered his hadith as acceptable ليس به بأس. A-Dhahabi nevertheless added in his siyar 'alam an-Nubala' سير أعلام النبلاء a comment saying that some scholars consider his hadith to be close to Hassan.

Note that al-Hakim himself considered the chain as on the conditions of al-Bukhari and Muslim and the hadith therefore as sahih, and in his opinion the issue might have been with Sharhabyl شرحبيل whom he called ibn Sa'ad al-Ansari ابن سعد الأنصاري a mohhadith whom imam Malik firstly rejected and later accepted (according al-Hakim). Note that others consider Sharhabyl as weak too.

The issue with the chain of ibn abi Shaibah

should be clear as the hadith has a clear disconnection.

The version of ibn 'Ady

includes ibn Lahi'a ابن لهيعة in the chain whom is considered as weak (according my source without quoting any evidence) and Ishaaq ibn abi Farwa إسحاق بن أبي فروة is also a rejected narrator.

but I'm not the right person to judge or qualify it. From the above we may conclude that all three chains have issues, maybe the first would have less according some scholars.

Sources: Beside siyar 'alam an-Nubala' on islamweb I rely a lot on this Arabic thread.

4
Is there a scale or classification for scholars and their qualification of hadith narrators?

2
Is the Hadith Sahih "The World is a Prison of the Believer and Paradise for the Kafir" Authentic?
5
Is there a hadith to the effect of "freeing slaves was the act that God found most acceptable"?
4
Are there narration chains for the coccyx/tailbone hadith that don't go through Abu Hurairah?
3
Is the hadith "He who loves kafirs, he shall be resurrected with them" authentic?
3
What is the authenticity of the hadith that if Moses and Jesus were alive they would have to follow the prophet?