How did the Prophet Muhammed (PBUH) give a dua for efficiency of vehicles running on petrol?

I recently received the below screen grab from a relatively popular TV channel among the people from the sub continent. 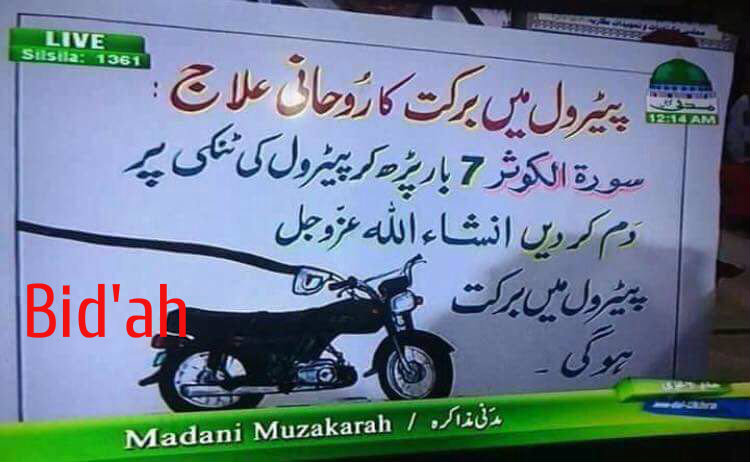 From what I understand it states that for better efficiency of petrol in your vehicle, recite Surah Kausar 7 times and blow air on the tank through your mouth.

Is this an innovation in religion or did the 'Madani' scholars from 'Hind' issue a fatwa through ijtihad from some authentic Hadiths?

Suratil Kawthar is outlined below from this source.

It was revealed after the kufar and mushriqs ridiculed the prophet after his last son, Ibrahim, had died. This article describes the incident in more detail.

In describing the word abtar in the 3rd aya, the article reads:

"The Arabs used to call the one who had no son /abtar/, and 'abtar' means 'the animal whose tail is cut off'. So, then. it means the one whose succession in his seed has ceased, i.e., the one who has none to inherit him."

The article continues: "To console the holy Prophet (S), this Surah was revealed with the glad tidings of the greatest amount or the highest degree of the grace of Allah, bestowed on him.

Those people traditionally considered the male child extraordinarily valuable and thought of him as a substitute for the father. They happily imagined that with the demise of the Holy Prophet (S) his program would cease because he had no son to substitute him to continue it.

The revelation of this Surah was, in fact, an answer to the enemies of the Apostle to inform them that Islam and the Qur'an would remain and ceaselessly continue, forever."

So the word "Kawthar" means "fountain of abundance" in this context. The prophet is quoted as saying it is a river of abundance in Jennah. I don't think it refers to worldly or material abundance like petroleum since this would contradict ayas like the following:

"008.028 And know ye that your possessions and your progeny are but a trial; and that it is God with Whom lies your highest reward."

And, indeed the ones who ridiculed the prophet have been cutoff, while our prophet's name is repeated by every Muslim many times a day for adzan, iqama, salah, dua, etc. Also, the prophet's name with its variants like Ahmed, Mustafa, Mahmoud, etc is the most the most popular, oft-used name. Peace and blessings be upon him. And Islam is here to stay and is the fastest growing religion.

While kawthar probably does not refer to abundance of petroleum, I can see how it may refer to efficiency of fuel use since waste of fuel is "israf", which is a sin. Waste of non-renewal resource is taking the "haq" of future generations. So we can deduce how getting the most mileage out of available fuel increases fuels availability for both the present consumer and the yet unborn. Thus the relevance of reciting this sura 7 times to increase fuel efficiency.