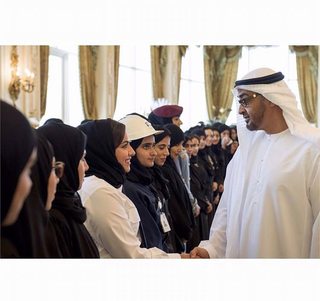 It shows prince Mohammed bin Zayed shaking hands with a woman that is a part of Etihad airways best engineers. Therefore, I got a bit curious about the situation here.

As I know, in Islam it is forbidden to shake hands with a woman. So, why is he shaking her hand?

Second, her headscarf is not fully covering her hair in the front of her head. As I saw in some other photos, not all women in UAE cover their front hair. As far as I know that is also forbidden in Islam - the whole part of the head should be covered.

What am I missing here, or am I fully wrong about those two things?

Putting aside the possibility that she's e.g. his sister or wife, there's a range of possibilities that someone might "break the rules".

We'd only be guessing as to why these two people are doing what they are doing.

Sharia seems to mean different things to Muslims and non-Muslims. Muslims might consider it as an Islamic code of conduct. We don't think of it as malleable, so it doesn't make sense to talk about it being more liberal in one place.

Some governments enforce some aspects of Sharia, and this is what non-Muslims often have in mind. However, implementation varies greatly from country to country. It's probably safe to say what UAE implements is more liberal than, say, Saudi Arabia. And it's probably more strict than other countries which implement Sharia law e.g. Malaysia or Indonesia. There's a description of the UAE's implementation on Wikipedia, which doesn't sound particularly "liberal".

Not the answer you're looking for? Browse other questions tagged women hijab or ask your own question.

13
Why should a man marry more than one wife, when he clearly cannot treat them equally?
2
Is father-in-Law non-mahram according to Islam?
4
Covering Face In The House
7
Does woman need four witnesses to prove rape in Sharia law
4
Do my parents get ethem (bad deeds) for the way I choose to dress after tring to influence me to dress more modestly?
2
Is it true that “pregnancy is seen in sharia as like an illness”?
1
Why do Muslim women need to cover more than men?
1
If a Muslim woman were beaten by her husband who believes his actions are Sharia compliant, how can she rectify the situation?
2
Is it permitted to sit with your sister in law in same room?
1
is there any verse where it says men have more physical strength than women?