How do we reconcile the Quran and Sunan Abu Dawud with the fact that the Earth is not flat?

How do we reconcile the following 3 Scriptures:

Until, when he reached the setting-place of the sun, he found it [no "as if" anywhere in the original Arab] setting in a spring of dark mud, and he found near it a people. Allah said, "O Dhul-Qarnayn, either you punish or else adopt among them goodness. - Quran 18:86

Until, when he came to the rising-place of the sun, he found it rising on a people for whom We had not made against it any shield. - Quran 18:90 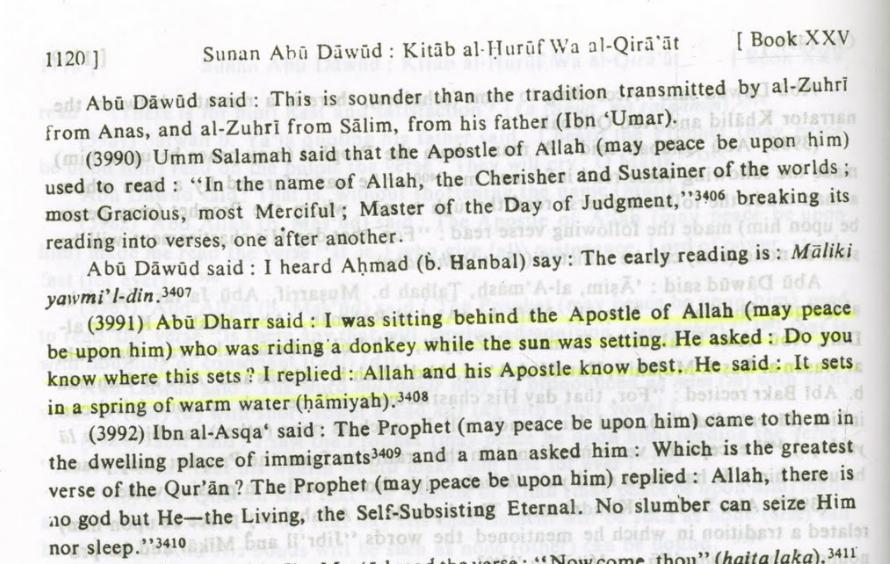 Abu Dharr said: I was sitting behind the Apostle of Allah who was riding a donkey while the sun was setting. He asked: Do you know where this sets? I replied: Allah and his Apostle know best. He said: It sets in a spring of warm water. - Sunan Abu Dawud 3991

How do we reconcile these 3 Scriptures with the fact that:

Your puzzlement derives from a misreading of the text. First, "Maghreb al-shams" or "setting of the sun" is a time not a place. "Until he reached" in Arabic doesn't connote a place necessarily but could be a time, and in this case, is a time, aka in Arabic maghreb al-shams, or sunset. Now it is true that it also means "west", the direction of sunset, but the use of "shams" or "sun" is to make clear that this refers not to the maghreb of place which would not include the word "sun", but the time of the setting sun. Like "he arrived at sunset". And speaking of "at"...

The second, and far more important, issue is your (quite odd) interpretation of the Arabic preposition "fee" في and its usage. It is comparable to the English prepositions "in" or "at", whose usage is sometimes, like "fee", interchangeable. One can say, for example, "at home" or "in my home." Note that the meaning is the same, but in English we have to add the "my" to use "in" with home, indicating the difference between "at" and "in" can overlap, i.e., they can mean the same thing. Both meanings also can apply to the Arabic "fee". So if one says

Then he (Thul-Qarnain) "found it (the sun) setting at a mud-spring", it becomes apparent that the sunset occurs at a location which has a spring of mud, perhaps a spring occurring in an area of clayish soil, which over time became mud. The following is a translation using "at" (I admit it was hard to find one, but many of these translators are not native Arabic speakers or know Arabic only from modern colloquial usage and what they hear from others):

Until he reached the setting of the sun; he found it setting at a hot spring, and he found a people near it. We said: “O Two Horned One, either you shall punish, or you shall do them good.” (Note: I also disagree with the "hot springs" translation, which has no direct bearing on the use of "at".)

The use of Arabic and English here are not so vastly different, though. One can say "the sun set in the valley" and not a single thinking person will presume it means the sun literally set in the valley. If I say in English or Arabic (using "fee") "I squeezed the oranges in my house," one will presume one is squeezing the oranges not literally into the house as a receptacle but rather one is located in the house squeezing oranges into something like a glass, for example. "In" or "fee" does not necessarily mean "into", even though the word "squeezing oranges" implies "into" something. But the absurdity of squeezing oranges into one's home precludes that interpretation.

In the same way, the absurdity of the sun setting directly into the physical muddy spring precludes that interpretation, hence no need for "as if." However in defense of the "as if" translation, it may be implied that the sun appeared to set (by virtue of its reflection of sunset colors on the mud), or one could say placed its sunset colors on, the muddy spring. I am sure no one at the time believed the sun literally set into the spring, or by that time, someone of that nation/ people would surely have tried to find it and possibly remove it.

Further evidence: the "people" were found also "in" the antecedent ,(not the muddy spring which is an aside but) the sun, and I'm also sure no one believed a nation could live "in" the sun or indeed for that matter, in a muddy spring (inside, like the alleged setting sun).

This is a description of place which may have been a "sign" for Thul-Qarnain regarding his destination, but in any case cannot mean the Quran is espousing the flat-earth theory. It has nothing whatsoever to do with that. Have you ever seen the sun set into the ocean, and did that make you a flat-earth believer?

I'm not blaming you; almost all translations used "in" or even "into", causing a couple of them to go with the metaphor using "as if." I think it is a strongly visual description, made presuming that we are using our minds. "Afa laa t'aqiloon?"

In addition, the second aya you quote in your question 18:90 has nothing to do with this issue. It does not say the sun is rising literally and physically out of the earth — to make that point unequivocally clear would require different phrasing — but that he reached that place at the time/ place of sunset and discovered there a people/ nation who had no respite from the sun once it rose. In those days the rising and setting of the sun were significant markers of both time and distance, and this was a journey over varying terrain.

As for the hadeeth, I would say the narrative may have been misquoted or mistranslated, but in either case, the idea of the sun rising out of or into a body of water directly and physically is certainly incorrect, and is not substantiated by any correctly understood Quranic aya. (And this is not the only fallacy implied by such texts of hadeeths; there are "weak" hadeeths and, according to Bukhari, "wrong" hadeeths, 2,000 of which he supposedly memorized, according to one of the quotes attributed to him. Don't take this one to the bank.)

I think this confusion comes from the misunderstanding of the meaning of the phrase "the sun set in _____". If you want to look that deep into it, why don't you just criticize the fact that it is saying that the sun sets at all because technically the sun doesn't move at all?

This is a tafsir which clarifies this:

"The limit where the sun set" does not mean the "place" of the setting of the sun. According to Ibn Kathir, it means that he marched to the West conquering one country after the other till he reached the last boundary of the land, beyond which there was ocean." (Sayyid Abul Ala Maududi - Tafhim al-Qur'an online translation)

I don't know of any major tafsir that interpreted this ayah to mean that the sun literally sets into water. And Allah knows best.

Sun usually vanishes before setting (in the city etc). But on the extremes west of the earth where there are oceans and no land, the sun vanishes after it has fully settled down.

from Spring (eye) of dark mud I only perceive that the ocean was dirty or it looks dirty (like dark mud) see pic below, the ocean looks like dark mud where the sun is setting, I don't know where the pic was taken

If you look at the map, the left extremes lies in Africa (Mauritania/Senegal) and climate there is very hot.

Same goes about the extreme east, At other places of the world, sun appears some time after it has risen, but on the extreme east where there is ocean, the sun appears just as it rises, and from no shield from the sun I also perceive that that place is also hot and it heats up just as the sun rises.

But both ayah and ahadith have nothing to do with the shape of the earth to be round or plain except that the sun seem to settle in and rise from the same ocean. and it only rises at one place and only sets in the other the way it is mentioned i.e. no shield when it rises in the east and setting in mud in the west.

6
Does the Holy Quran gives the concept of flat earth?
5
Does the sun set in a murky pool in Qur'an 18:86?
2
How to resolve an alleged error in the Qur'an in relation to the orbit of the Sun?

6
Does the Holy Quran gives the concept of flat earth?
20
How do we reconcile the apostasy ruling with Al-Baqarah 2:256?
2
Is there a contradiction about the age of Earth with Quran 21:30 "...the heavens and the earth were a joined entity, then We separated them..."?
5
Does the sun set in a murky pool in Qur'an 18:86?
1
Does Quran 8:67 say that prisoners of war should be killed and not ransomed?
3
Is it mentioned anywhere in the Quran that Shaithan came with Adam to Earth from Paradise?
0
How to reconcile that there are seven earths with the verses that Allah "created the heavens and the earth"?
1
Does Islam Teach That The Earth Was Created Before Sun, Stars, Moon, Heavens, etc?
0
How could disbeliever see the creation of the heavens and earth?