Examples of Quran verses that differ from normal recitation? 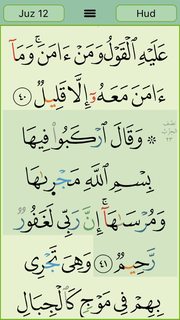 In the above highlighted verse which is from surah Hud [Ayat:41] مجرها is not recited normally. Are there any more such verses in Quran?

1) I have included the image from the Quran which I recite. So, my question is should I recite it as Majreha (not completely raa or ree, but in between that) or Majreeha. According to Hafs & Asim, which will be correct?

The issue you are talking about is not related to what is normal...

People these days in almost all Muslim countries with the exception of the Maghrib states and Somalia (some local exceptions can be added) are primarily confronted with the so prevalent riwaya' of Hafs 'an 'Asim رواية حفص عن عاصم (also read Why is the Hafs reading of the Qur'an so prevalent?) therefore only a few people seem to know that there are 10 qira'at which are considered as sane of the Qur'an and this way 20 correct riwayat (narrations of the qira'at of the Qur'an)!

Each of these qira'at and riwayat have special tajweed rulings ... This may mean that you could listen to a recitation of the whole Qur'an in a recitation style you are not familiar with, where it seems that 20-50% (just a guess!) of the words are even pronounced and performed differently! For example scholars say that between both riwayat of 'Asim Sho'aba and Hafs there are more than 500 differences!

Please note that in many cases the same riwaya has different options in tajweed on how to recite a verse.

Beside that the rulings for Qur'an recitation seem to be different then those of the usual Arabic pronunciation (I've read opposite statements on that topic).

Now in your Moshaf copy the editors added that these recitations are choices of Hafs saying: قرأ حفص بـ ...

One could add the turuq ... the distributions or paths of the narration of a qira'a too as for example in riwayat warsh 'an Nafi'i رواية ورش عن نافع the difference between the Tariq of al-Asbahani الأصبهاني and al-Azraq الأزرق or any others is minimal for the layman, but big enough for the expert!

In this special verse and word مجراها we have at least two different readings from the perspective of Arabic language I know of:

As I've said in the comment the dot under the Arabic letter "Ra' الراء" (more explicitly "ر") means that we must perform the ruling of tarqiq ترقيق of the letter "Ra'" or taqlil تقليل ("softening the pronunciation of the letter of the "ر", so it will sound strange to a person who is not familiar with this tajweed rule, which as far as I know isn't present neither in the rules of Hafs 'an 'Asim nor Sho'aba 'an 'Asim whom by the way reads it مُجْرَاهَا simply without any change in the tone) in some moshafs it refers also to what is called imalah الإمالة (but usually the used sign for that in Hafs 'an 'Asim is a diamond sign which appears under the letter in this is what you'll find in the copy of the Moshaf of al-Madina for this verse see here, while on islamweb they have used a dot as you can see here) which may make it sound like "majreeha". Note that this symbol doesn't appear in your moshaf copy, but the correct recitation according to Hafs is with imalah:
From your copy of the Moshaf: قرأ حفص بإمالة الراء!

As a layman I couldn't make out a difference between the tarqiq of the letter "ra'" which applies in for example Warsh and the imalah ruling here!

As said in my comments I assume because of the explanation of the differences in Arabic language that this is a kufi qira'a so i could find that beside Hafs 'an 'Asim it appears in the riwaya of al-Kissa'i (I found it in abu al-Harith 'an al-Kissa'i here and here in ad-Duri 'an al-Kissa'i) and a riwaya of Hamzah (I found it here in Khalaf 'an Hamzah and Khallad 'an Hamzah here) and those of Khalaf (boith rawis). With the exception of these seven riwayat all the riwayat use the version مُجْرَاهَا with or without imalah/tarqiq!

This symbol or sign is set above the letter and refers to the recitation or tajweed ruling of ishmaam الإشمام.

The editor is referring to the three appearances of the word ضعف which Hafs has "chosen" to read "ضَعْف" (da'f) with a fatha on the letter "dad الضاض" ("ض") while others recited it "ضُعْف" (do'f) with damah. However your editor says: that Hafs recited it with damah and fathah (both seem to be correct recitation) but the version with damah is the most preferred (even if this seems to contradict the version of the Moshaf of Medina).
The quote from your Moshaf copy says: قرأ حفص بضم الضاد وفتحها في الثلاثة لكن الضم مختاره.

From the perspective of the Arabic language both options are correct even if the first sounds more quotidian, but only majreeha is a valid and approved qira'a. Also note you should never ever mix two different riwayat of the Qur'an as we are asked to recite the Qur'an as it was revealed and an approved and accepted qira'a means that this way it was revealed. So if you don't know the rulings for let's say Sho'abah it is the best not to try to recite the Qur'an based on those rulings.

This means if you are only familiar with Hafs read it in a Moshaf based on the rulings of Hafs 'an 'Asim and recite it correctly according those rulings: "majreeha/majraeha" with imalah.

Finally I recommend you to read:
Examples of verses of the Qur'an with two different readings?
What happend to the second garden of the disbeliever?
Different versions of Arabic Qur'an
What are the readings (qira'at) of Quran?

20
What are the readings (qira'at) of Quran?
10
Why is the Hafs reading of the Qur'an so prevalent?
6
Different versions of Arabic Qur'an
2
Examples of verses of the Qur'an with two different readings?
4
What happend to the second garden of the disbeliever?

7
From which original source was Quran compiled?
6
Different versions of Arabic Qur'an
6
Is it likely that the sana'a manuscript was an accepted reading of the Quran?
6
What is being recited before the Bismillah in Surah Al-Fatihah?
3
Did Surah 9:5 abrogate surah 2:256?
0
Can only a part of a long surah be recited during prayers?
1
worldly reward after their death?
2
What is the one instance of imala in Qalun al-Nafi'?