What are the different punctuation in Quran?

I would like to know how many punctuations are there and their respective action (i.e. stop for a while or don't stop at this point of sentence) that come in Quran.

For example, I know of one punctuation(not the exact letter) that is meant to be - the reader should not stop at this point while reading because that would make the sentence change it's meaning and could be totally opposite.

These punctuation marks are called Alamatul Waqf or stopping punctuation.

(م) Meem: When seen, it means you must stop, it is a mandatory stop. Mind you, you will also see a meem After a Noon Sakin or a Tanwin which means that the rule of Iqlab is to be applied. You will see a Baa' after it, if you see no Baa' than there is no Iqlab.

(ج) Jeem: It means you are able to stop if you want.

(س) ٍُSeen: Means to take a soft/short pause without taking a breath. You would also sometimes see a Seen above a Saad (ص) That means you pronounce the latter a seen instead of Saad, but if it is under the Saad than pronouncing it as a Saad (it's original pronunciation).

(قلي): Means that you can stop or move on, but stopping is more preferred than continuing on.

(صلي): Means you can stop or continue on, but continuing on is more prefered than stopping.

Tip: Usually you can look at the back of a Qur'an and you can see the list of the Alamat/Signs.

There is also Alamat in the Indian Script, they have most of the above. Here is the rest:

(ز) Zai: al-waqf al-mujawwaz, means that you can stop, but the better choice is not to stop.

means that the statement has not yet been completed at this point but, because the sentence has become long, here is the place to breathe and stop rather than do it elsewhere.

سكته: means one should stop here breaking the sound but not the breath.

Means one must stop a little longer than saktah (pause). But, breath should not break here too.

means that some phoneticians of the Qur'an identify a stop here while others do not.

This word is 'qif which means 'stop' and it is inserted where the reader may possibly think that a stop was not correct there.

Here is a summary of Alamat Al-Waqf (stopping punctuation).

These punctuation marks indicate where a person can/cannot or should/shouldn't stop. They're the tiny Arabic letters you see above the line you're reading.

What do they mean? They match up pretty much one-to-one with ahkaam taklifeeya.

Reference (with pictures of the stops): Tajweed - Different Stops

The given answers especially the one of @مجاهد only cover the complex punctuation, symbols or signs of waqf (pausing) which are applied in the most prevalent Moshaf's following the Egyptian standard moshaf المصحف المصري, which is the one followed in moshaf al-Madina which is printed in majma' al-malik Fahd مصحف المدينة النبوية المطبوع بمجمع الملك فهد لطباعة المصحف الشريف. I'll use the accepted answer of مجاهد as a reference for the Egyptian standard.

In northern Africa and most countries were the reading of Warsh or Qalun from Nafi'i is wide spread an other very simple punctuation is used: 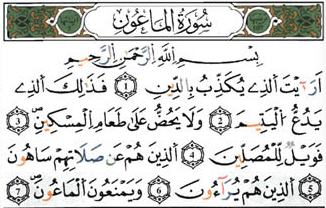 Note that in this calligraphy style the letter فاء has no point on it while the letter قاف looks like a فاء: For example

is فِي قُلُوبِهِمْ. There's also a simplified North African calligraphy which is easier to read as it looks like the Egyptian handwriting style.

The only symbol for waqf used in this moshaf is the Arabic letter صاد ssad ("ص" in the text) or a simplified صه, (you may see it written in a diagonal position in the 2nd picture) which is an Arabic expression and means keep quiet.

In India and Turkey they follow the signs of waqf of the Imam as-Sijaawandi السجاوندي (died 540 a.H.) in his book 'ilal al-Waqf علل الوقوف and they are:

ج Jeem: it is allowed waqf (the similar as in the Egyptian standard).

ز Zay: it is allowed to do waqf but better not (similar as in the Egyptian standard).

ص Sad: al-Waqf al morakhas darouratn, it means it is allowed to do waqf here in case of necessity (similar as in the Egyptian standard)

ع 'Ayn: which is sign recommending to bow if you are reciting in a prayer.

the medina mashaf is soo easy to read. the indian or south african print has about two dozen different stop signs.

we only have a 4 different stops in madina mashaf :) .

(قلى) better to stop but you can continue if you want to.

(ج) you can stop or continue

(مـ) you must stop here

(لا) you must continue

Not the answer you're looking for? Browse other questions tagged quran-recitation .

5
How many writing styles of Mushaf Quran that exist?
2
Is stopping at the one of the two pairs of three dots compulsory?
3
What Should I Do When I See This Symbol in Quran
3
What is the origin/purpose of the pause marks in the Quran?
3
Difference of waqf in Qiraat Hafs between waqf الوقف in usual Moshaf and turkish recitation
1
Suah At-Taghabun Aya 9: Why do no reciters pronounce the Kasra at the end of ٱلتَّغَابُنِ‌ۗ?
1
How to pronounce هُوَ in Surah Al-Hashr (59/22)?
1
What is the name of the decorative circle around verse numbers?
0
Reading first 10 ayah in salat
0
I am confused about two different stopping signs, used at same point in different Mushaf of Quran
See more linked questions

9
What Suras/Ayat are Mustahab (recommended) to recite in the five fardh prayers?
7
What, of reciting Quran at the grave, is permissible?
5
Recitation of the Quran without understanding Arabic
1
Is there any vocal aggression in the Quran?
3
What are the benefits of memorizing the Quran?
5
what is this symbol on the alif character ? The pronounciation in different cases
1
Are there any specific recommended timings to read Quran in Ramadan?
1
Are we supposed to say 'Alaihi Salam' on any Prophet's name during recitation of the Quran?
0
I am confused about two different stopping signs, used at same point in different Mushaf of Quran
2
What is this punctuation mark?