Is it true that Prophet Mohammad did not remove a statue of Mother Mary from the Kabah?

I am confused about this matter; I heard this from a TV debate from an atheist.

Is it true that Prophet Mohammad did not remove a statue of Mother Mary from the Kabah?

The athar is not authentic. No picture or statue was left undestroyed by the Prophet ﷺ.

Hadith 186 says that Quraish had put inside the Ka'abah pictures of Jesus and of Mary. The footnote in the same book says the hadith is weak, with some people unnamed in its narration.

Hadith 185 says that the Prophet ﷺ, when he entered the Ka'abah, there were pictures of angels among other pictures. He saw the picture of Abraham, and said: "May Allah curse them. They made him an old man practicing divination by arrows." Then he saw Mary's picture. He put his hands on it and said: "Erase all pictures, except that of Mary." The footnote says the hadith is very weak. Likewise, hadith 187, which is of similar wording but mostly missing narration chain, is also ruled as weak in the footnotes.

Hadith 187 is mursal (hurried, with severed narration chain) with no narration chain, save for Asma' bint Shaqar (Arabic: أسماء بنت شقر), who is unknown, through an unnamed woman. 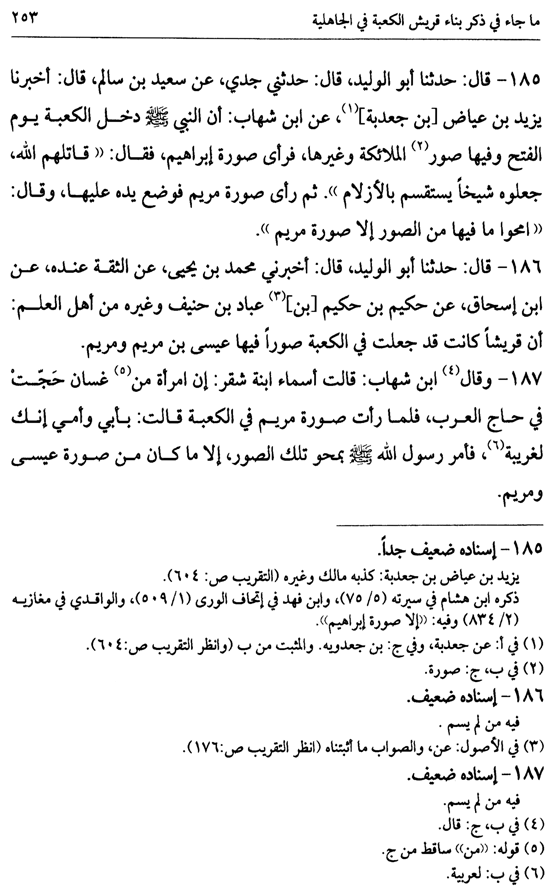 No, it is not true. For there was no statue of Marry in Kaabah. However there were paint work on the walls of Kaabah. One among them was that of Marry the mother of Jesus, with jesus in her lap and Abraham watching over them. Our prophet pbuh ordered to wash all the pagan paintings but specifically instructed to leave the portrait of Marry alone.However that too was eventually washed in time so that people may not mistake those three for God. If that painting had not been washed, today we might have had fournity in islam. The God, Abraham, Marry and Jesus. Thats why i believe the painting was removed for the greater good and to avoid any confusion or distraction from believing in one God alone.

This incident was mentioned by Al-Azraqi...

Not the answer you're looking for? Browse other questions tagged prophet-muhammad kaabah or ask your own question.