Is there a reward for building a mosque in Minecraft?

Unsurprisingly, building a mosque is considered a good deed, and there's even a reward for it:

In some computer games, e.g. Minecraft (official site), it's possible to build a mosque. And some people have done so, e.g.: 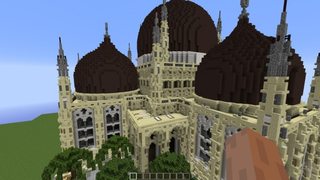 I'm wondering if the reward still applies for mosques built in this way.

Question: Is there a reward for building a mosque in Minecraft?

In Minecraft, the simulated people do not pray in it, but they (along with other simulated creatures) might walk inside and sell goods in there.

The player might build the mosque in the name of Allah, or perhaps just for entertainment.

(I am not sure why the question got so down-voted, I'll try my best at least to answer.)

The apparent meaning of the hadith you quoted is as you know and some mentioned, speaking about building a real world mosque, where people come to worship God.

But does that mean that you won't get a reward, building a symbolic mosque in a game for instance? So to your question: Is there a reward for building a mosque in Minecraft?

There is the famous hadith, related to Husn-Dhann (حسن الظن بالله) believing the best of Allah:

قَالَ اللَّهُ أَنَا عِنْدَ ظَنِّ عَبْدِي بِي
Allah's Messenger (ﷺ) said, "Allah said, 'I am to my slave as he thinks of Me, (i.e. I am able to do for him what he thinks I can do for him) (Sahih Bukhari - sunnah.com)

This has been interpreted that a person, according to how the person thinks of God, he/she might get that response. See for instance this article in arabic.

So, if a person having the intention of building the mosque in a game, which somehow might make other muslims playing the game, remember his religion and duties, why wouldn't you get rewarded? Even non muslims might become fascinated, maybe that is their first seed in spiritual growth leading the person to become a muslim.

So whoever does an atom's weight of good will see it,
Surat Az-Zalzalah, verse 7

We belive in God, being the most gracious, the One Who gives as much as he wishes.

Conclusion
With the statements above, yes, there is a reward for that. Only God knows how big the reward would be. And if he pleases, a house might be built for one in Paradise, even though its not a real life mosque (especially if we consider the hadith: I am able to do for him what he thinks I can do for him).

يُنفِقُ كَيْفَ يَشَاءُ
He spends (of His Bounty) as He wills
Quran, 5:64

Not the answer you're looking for? Browse other questions tagged masjid software reward .

3
Can I make website for a mosque?
3
Is there any reward for reciting the Quran for the dead, especially Sura Yaseen?
3
Can any building be converted into a mosque?
2
Is the reward for observing hijab in Iran the same as for observing hijab in Australia?
1
Skipping a mosque for another
1
Do Islam reward teaching?
1
Is there reward in watching Islamic videos on the Internet?
0
Will Allah reward a person for just gaining Islamic knowledge?