Reading Quran 19:27,28 Christians and Jews encounter something that raises alarms.

Then she brought him to her people, carrying him. They said, "O Mary, you have certainly done a thing unprecedented. O sister of Aaron, your father was not a man of evil, nor was your mother unchaste."

The same alarms were raised in Najran, as we see recorded in Sahih Muslim #5326

When I came to Najran, they (the Christians of Najran) asked me: You read "O sister of Harun" (i.e. Hadrat Maryam) in the Qur'an, whereas Moses was born much before Jesus. When I came back to Allah's Messenger (may peace be upon him) I asked him about that, whereupon he said: The (people of the old age) used to give names (to their persons) after the names of Apostles and pious persons who had gone before them.

The 2 problems the Christians faced in this passage is that...

The first being problematic to their christian faith, in the understanding that the Light of the world was born of a young woman, but the greatest miracle in fertility & life.

Luckily Muhammad explains the situation, saying that it was simply the way people were named in the time, simply a metaphor.

Sounds like a closed case, but not yet, there is no evidence (I am able to find) showing in that time (of the Mother of God) where an ordinary person would be named "sister of (pious ancient person)". (Judea preferred)

If there is no evidence, then I can only see 4 situations.

My question is if there's any evidence backing up the metaphor explained by Muhammad.

The Arabic word used here is similar to the Hewbrew word אָחוֹת (achowth), its usage is explained in Gesenius' Hebrew-Chaldee Lexicon as: 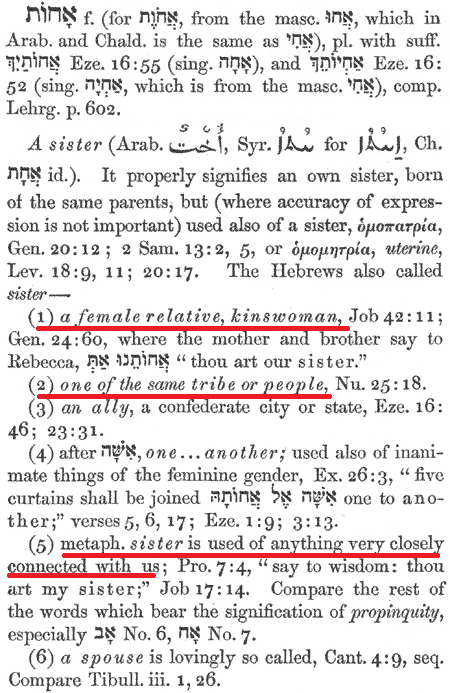 Its similar to the Arabic Akhi (brother) which also has cognates in Hebrew where they include tribal relations and similarity of character: 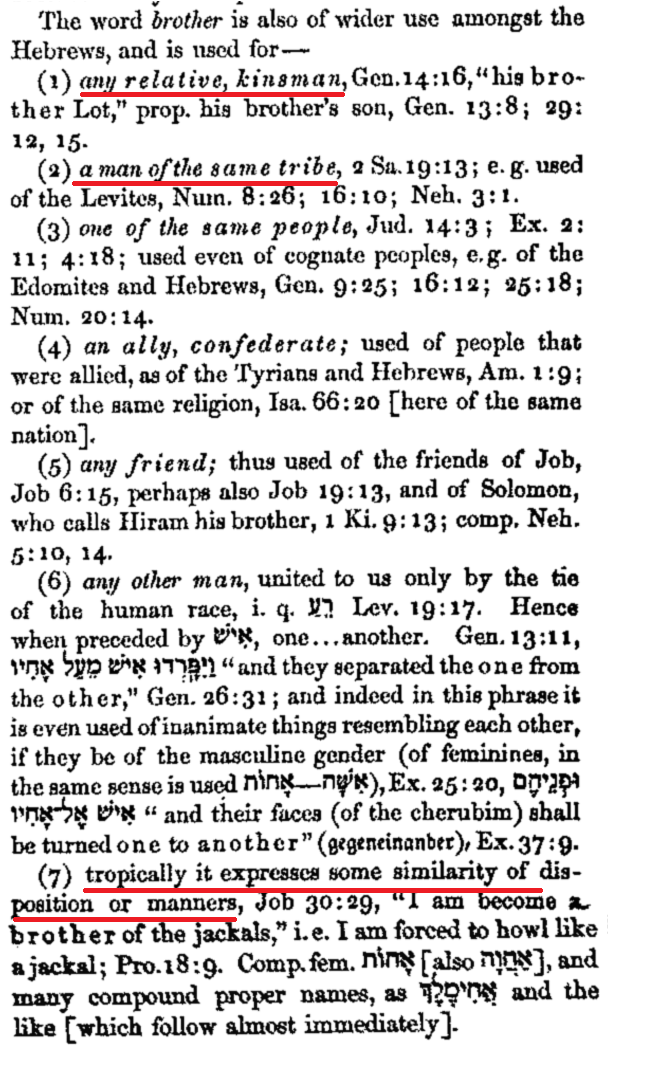 From the NT, there seems to be evidence that Mary is related to the descendants of Aaron, brother of Moses, and it could be that the people referred to that:

Luke 1:5 There was in the days of Herod, the king of Judaea, a certain priest named Zacharias, of the course of Abia: and his wife was of the daughters of Aaron, and her name was Elisabeth.

Luke 1:35 And the angel answered and said unto her, The Holy Ghost shall come upon thee, and the power of the Highest shall overshadow thee: therefore also that holy thing which shall be born of thee shall be called the Son of God.

Luke 1:36 And, behold, thy cousin Elisabeth, she hath also conceived a son in her old age: and this is the sixth month with her, who was called barren.

I understand that this is a valid interpretation among Christian scholars, though some may disagree with it:

From Elliot's commentary to the Bible for English readers:

The scanty notices in the Gospels are (1) that she was a “cousin,” or more generally a “kinswoman,” of Elizabeth, and may, therefore, have been, by her parentage, wholly or in part of the daughters of Aaron.

Luke 1:36. καὶ ἰδού, introducing a reference to Elizabeth’s case to help Mary’s faith.—συγγενίς, late form for συγγενής (T.R.), a blood relation, but of what degree not indicated, suggesting that Mary perhaps belonged to the tribe of Levi.—γήρει: Ionic form of dative for γήρᾳ (T.R.). Hellenistic Greek was an eclectic language, drawing from all dialects as from the poets, turning their poetic expressions to the uses of prose.—καλουμένη: Elizabeth is described as one who is still being called barren, though six months gone in pregnancy, because people have had no means of knowing her state.

συγγενίς] The nature of this relationship, which is not at variance with John 1:36, although questioned by Schleiermacher and others, is wholly unknown. It is, however, possible that Mary was of the stock of Levi (so Faustus the Manichean in Augustine, c. Faust. xxiii. 9; and recently, Schleiermacher, Schr. d. Luk. p. 26; Hilgenfeld, Ewald, Gesch. Chr. p. 177, and others), as the Test. XII. Patr. p. 542 makes the Messiah proceed from the stock of Judah (Joseph) and (comp. p. 546) from the stock of Levi.[25]

Secondly, the Quran contains an account of the life of Mary before Jesus's birth and states that she was dedicated to the Temple and raised under guardianship of the Kohen:

Quran 3:35 [Mention, O Muhammad], when the wife of 'Imran said, "My Lord, indeed I have pledged to You what is in my womb, consecrated [for Your service], so accept this from me. Indeed, You are the Hearing, the Knowing."

Quran 3:36 But when she delivered her, she said, "My Lord, I have delivered a female." And Allah was most knowing of what she delivered, "And the male is not like the female. And I have named her Mary, and I seek refuge for her in You and [for] her descendants from Satan, the expelled [from the mercy of Allah ]."

Quran 3:37 So her Lord accepted her with good acceptance and caused her to grow in a good manner and put her in the care of Zechariah. Every time Zechariah entered upon her in the prayer chamber, he found with her provision. He said, "O Mary, from where is this [coming] to you?" She said, "It is from Allah . Indeed, Allah provides for whom He wills without account."

Although this account is not present in the canonical books of the New Testament (as far as I am aware), its referred to in Catholic and Eastern Orthodox tradition and in some books of the apocrypha.

Wikipedia on the Presentation of Mary:

The account of the Presentation of the Blessed Virgin Mary in the Temple is principally based on the Protoevangelium of James, which has been dated by historians prior to the year 200 AD. The story relates that in thanksgiving for the birth of their daughter, Mary, Joachim and Anne decide to consecrate her to God, and bring her, at the age of three years, to the temple in Jerusalem. Mary’s presentation in the temple draws parallels to that of the prophet Samuel, whose mother Hannah, like Anne was also thought to be barren, and who offered her child as a gift to God at Shiloh.

Mary remained in the Temple until her twelfth year, at which point she was assigned to Joseph as guardian. According to Coptic tradition, her father Joachim died when Mary was six years old and her mother when Mary was eight. While the story is a legend with no foundation in history, the point is to show that even in her childhood Mary was completely dedicated to God. It is from this account that arose the feast of Mary's Presentation.

So it could be that the people referred to her as a sister of Aaron because of her link to the Priestly order, and her dedication and worship in the Temple, a similar disposition to Aaron.

Tafsir Al Qurtubi narrates the following views present in Islamic tradition on the relation between Aaron and Mary:

Some said, the Aaron here is Aaron, the brother of Moses. The meaning is that "we took her worship and service (to the Temple) as similar to Aaron, then how could she do that?" Some said that she was called sister of Aaron because she was of his descendants ... Some said that Mary had a (step) brother from a father who was named Aaron, and that the name was common among the tribes of Israel because of Aaron's piety, and this other Aaron was also well known and exemplary devout person of the Children of Israel.

Just to add additional information to above answer:

When I came to Najran, they (the Christians of Najran) asked me: You read "O sister of Harun" (i.e. Hadrat Maryam) in the Qur'an, whereas Moses was born much before Jesus. When I came back to Allah's Messenger (ﷺ) I asked him about that, whereupon he said: The (people of the old age) used to give names (to their persons) after the names of Apostles and pious persons who had gone before them..‏

0
Was Mary from the tribe of Aaron?
1
Mary, the mother of Jesus and sister of Aaron?
3
Are muslims misinterpreting Surah Al-Imran?

11
Was the marriage of Aisha(RA) to Prophet Muhammad(PBUH) a divine decree?
1
How does the Qur'an (and its commentators) explain the miraculous birth of Isa? Who is Isa's father?
1
Why is Jesus called the son of Mary so many times?
2
Does the Quran forbid hadith?
4
Is Paul Mentioned In The Quran?
1
A more detailed hadith about 9:31