Is the Qur'an a book?

This may seem like a strange question at first, since well, we can literally see that the Qur'an is a book: 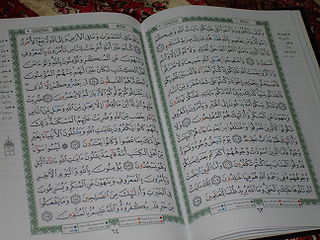 And we often refer to it as a book. And the Qur'an refers to itself as a book (Qur'an 5:15: "...There has come to you from Allah a light and a clear Book."). However, it doesn't seem that straightforward:

Question: Is it technically correct to refer to the Qur'an as a book?

This is a bit of a philosophical question: identifying the essence of the Qur'an, that which if we took it away, we would no longer have a Qur'an.

Update (or: what I've learned since I first posted this question):

The Quran is both, as it can be seen in several ayaat:

Do they not then consider the Quran carefully? Had it been from other than Allah, they would surely have found therein much contradictions. (4:82)

Do they not then think deeply about the Quran, or are their hearts locked up (from understanding it)? (47:24)

And this book, there is no doubt in it, and it is a guidance for the believers.

And before it was the Book of Musa, (Moses) a leader (Or: a record, a register) and a mercy; and this is a Book sincerely (verifying), in the Arabic tongue, to warn the ones who do injustice, and good tidings to the fair-doers. (46:2)

As it can be see, Allah refers to the Quran as 'Quran' at some times and as 'Kitaab' (book) at some times. To understand what this means:

This is a tafsir of the ayah:

That is, "The writ of the Qur'an is unchangeable and imperishable. It is inscribed in the Preserved Tablet of God. which cannot he corrupted in any way Whatever is written in it, has to be fulfilled: even the whole world together cannot avert its fulfillment. (Tafhim ul-Quraan)

Basically what it means is that the Quran as a book is preserved with Allah in unchangeable tablets, but on earth, it is a recitation because that is the form it was revealed to the Prophet (SAW) in.

In conclusion, it is both at the same time. And when Allah says 'book' he does not necessarily mean the Mus-haf that it is written on. He means the preserved tablets that all Mus-hafs are a copy of. So, yes, you can refer to the Quran as a book, since it is a book with Allah.

9
The 2nd verse of Baqarah say: "this is the book", But wasn't the Quran sent down as a "revelation"?
3
What is the literal meaning of the word "Qur'an"?
4
Quran originally without vowel marks?
5
Prophet Muhammad SAW was illiterate, who wrote the Quran then?
4
Can we complete quran by reading from book and then from device
2
The Birmingham Quran versus the present-day Quran
4
Can the Qur'an be referred to as The Good Book?

11
Can any Muslim interpret the Qur'an accurately?
6
Different versions of Arabic Qur'an
2
Should Qur'an 54:17 be interpreted as meaning the Qur'an is intended to be simple to understand?
5
Where are the seven levels of the nafs in Sufism mentioned in the Qur'an?
6
Which Qur'an verses are abrogated?
3
Do the exact words محمد رسول الله (Muhammad is the messenger of God) appear in the Qur'an?
1
What is an example of how a contextualist scholar applies the Qur'an in different ways according to context?
2
What exactly is takfir (declaration of disbelief)?
1
Is there any reference from Islamic teachings that Hinduism is considered as “polytheistic religion”?