What should a Muslim woman look for in a burkini?

A burkini... is a type of modesty swimsuit for women... the suit covers the whole body except the face, the hands and the feet, while being light enough for swimming. -- Wikipedia 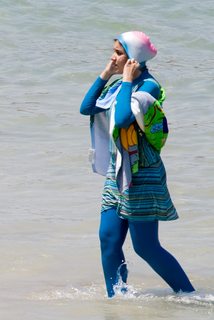 Looking online, there's a range of different burkini styles around. Some seem to aim to cover the awrah of a woman (in front of men), while some are more practical for swimming (a kind of compromise solution, or perhaps better suited for swimming only with women).

Question: What should a Muslim woman look for in a burkini?

There seems to be a bunch of problems with burkinis:

Edit: I tried some conservative swimwear I bought in Turkey. I can confirm 1., 2., and 3.; basically it's like swimming while wearing everyday clothes. And 4. is a logical conclusion from 3. From my experience, I can also add:

A related question is here: What does Islam think about Islamic swimsuit women wear?, but I'm trying to be more specific and practical.

The awrah of a woman infront of other women is the area from the navel to the knees:

According to the Hanafi, Hidayah:

According to the Shafi, Minhaj Al-Talibin:

Men may look at each other, provided they keep concealed the part of the body between navel and knees ...

Women among themselves should observe the rule laid down for men.

So if you are considering one for a segregated pool or segregated beach anything that at least covers that area would be permissible.

For a beach where there will be both non-mahram men and women, the rules of Hijab will apply ... and there should be a somewhat loose covering over the chest according to Quran 24:31 (the purpose being to blur the breasts, hips and pubic area). I doubt that a mixed gender swimming pool is permissible, indeed conservative fatwas also abhor segregated pools.

Thickness and weight of the cloth does not matter as long as its not see-through.

Look for a burkini that doesn't project (literally and figuratively) the women's beauties.

Additionally one can go and swim in remote areas. That's what most women in my family do. Being a Muslims I've realized that overtime, life will get easier. It's just the first 100 years that are difficult :| My gag is in direct reference to:

...be aware for your body (yourself) there's no value for it other than paradise, don't ever sell it for anything less!

Not the answer you're looking for? Browse other questions tagged practical-islam women clothing .

3
Is swimming in a mixed pool allowed if women are covered?
0
What does Islam think about Islamic swimsuit women wear?

11
Why scholars disagree on whether it's obligatory for women to veil their faces or not in Islam?
4
Covering Face In The House
1
Is it haram for women to wear trousers?
2
How can a Muslim woman achieve a balance between hijab and expressing her femininity?
1
Who says women dying their hands with henna is (im)permissible?
4
How does a convert woman go about finding a guardian?
1
If a Muslim woman abandons hijab, how would other Muslim women typically react?