Who says women dying their hands with henna is (im)permissible?

The name henna also refers to the dye prepared from the plant and the temporary body art (staining) based on those dyes (see also mehndi). -- Henna, Wikipedia

Mehndi... is a form of body art from Ancient India, in which decorative designs are created on a person's body... -- Mehndi, Wikipedia 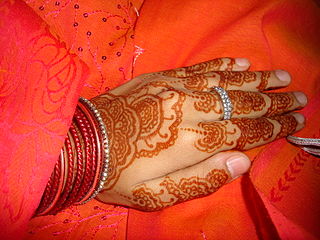 Some online fatawa say it's recommended:

Some online fatawa say it's permissible:

While others say it is haram or makruh:

Question: Who says women dying their hands with henna is (im)permissible?

Since there's inconsistent scholarly opinion, I'm seeking an overview of the different scholarly thoughts regarding the permissibility of henna depending on sect/school of thought. (...if possible, if not an answer explaining why this is impossible [or prohibitively difficult] would be fine).

It seems that Shia consider using Henna as a permissible and even a Mustahab (recommended) practice, although can be Makruh/haram in some exceptions (conditions). But, why does Shia consider it permissible/Mustahab, might be related to its profits, such as:

Not the answer you're looking for? Browse other questions tagged women adornments .

3
Does a woman have to pray with hijab, when she is alone, according to Shia jurisprudence?

4
Covering Face In The House
6
Does a Muslim woman need to cover her entire body (including hands and face) during prayer if a non-mahram man can see her?
2
Under what conditions can a Muslim woman wear a bikini?
4
How does a convert woman go about finding a guardian?
2
What should a Muslim woman look for in a burkini?
2
What is the 'awrah' of women with respect to other women?
2
Are Ankles to be covered for women? if not, till what extent the garment can be(above the ankles)?