Is dajjal mentioned in the Quran?

If dajjal is a very important warning sign in the end days, does the quran mention his name or about him? Please provide proof only if it is available in the quran. Thank you :)

Ad-Dajjal has not been (clearly) mentioned in the Quran for some possible reasons: Maybe because he is one of the worst creatures and to show his low value he was not even mentioned to show this dispraise. On the other hand Pharao was mentioned because his lies (such as 28:38 and 79:24) have been clearly shown off, while ad-Dajjal's lies can only come to light when the real "Messiah" 'Issa returns and make an end to his reign.

Therefore when mentioning 'Issa's return in the Quran one can conclude a hint of the Dajjal such as in the verses 4:157-159 which clearly says that 'Issa has neither been killed nor crucified, before confirming that any of the people of the book would believe in him (the real Messiah 'Issa) before his death, so this verse say he will come back and then people who knew the scripture would recognize and believe him and reject ad-Dajjal.

Also this verse is used as a hint of ad-Dajjal:

... The Day that some of the signs of your Lord will come no soul will benefit from its faith as long as it had not believed before or had earned through its faith some good. ... (6:158)

Based on the hadith mentioned in sahih Muslim, Jami' at-Tirmidhi and sahih al-Bukhari:

"There are three, for which when they appear, a soul will not benefit by its faith, if it did not believe before the Signs: Ad-Dajjal, the Beast, and the rising of the sun from its setting place" - or "from the west."

However there are scholars who don't believe in the coming of ad-Dajjal:
Muhammad 'Abduh has interpreted ad-Dajjal as meaning legends, charlatanism and quackery based on the words of Muhammad Rashid Rida the author of tafsir al-Manar.

Muhammad Faheem abu 'Obaydah: in his commentary of a book of ibn Kathir interpreted ad-Dajjal as meaning: the outbreak of corruption and evil.

No Dajjal is not mentioned in the Holy Quran ... it is an Arabic form for Anti-Christ ... the idea was adopted by the eschatological traditions of Sufism and was the result of newly converties from Christians to Islam.

Assalamualaikum, Alhamdulillah, I had watched many lectures from Sheikh Imran N. Hosein.

Well, according to Sheikh Imran N. Hosein, the word Jasad in the ayat below refers to Dajjal. It's indeed a direct quote of him as it is a snapshot of his ebook "Dajjal The Quran and Awwal al Zaman".

He has actually found Dajjal in the Quran even the word was not specifically stated "Dajjal" there. As he said, but he could be wrong and Allah SWT know the best. You can search his lecture about Dajjal on YouTube because his lecture usually around 1 hour and plus.

You can buy and download his book and ebook about Dajjal in the Quran at :http://imranhosein.org/books/571-dajjal-the-quran-and-awwal-al-zaman.html! 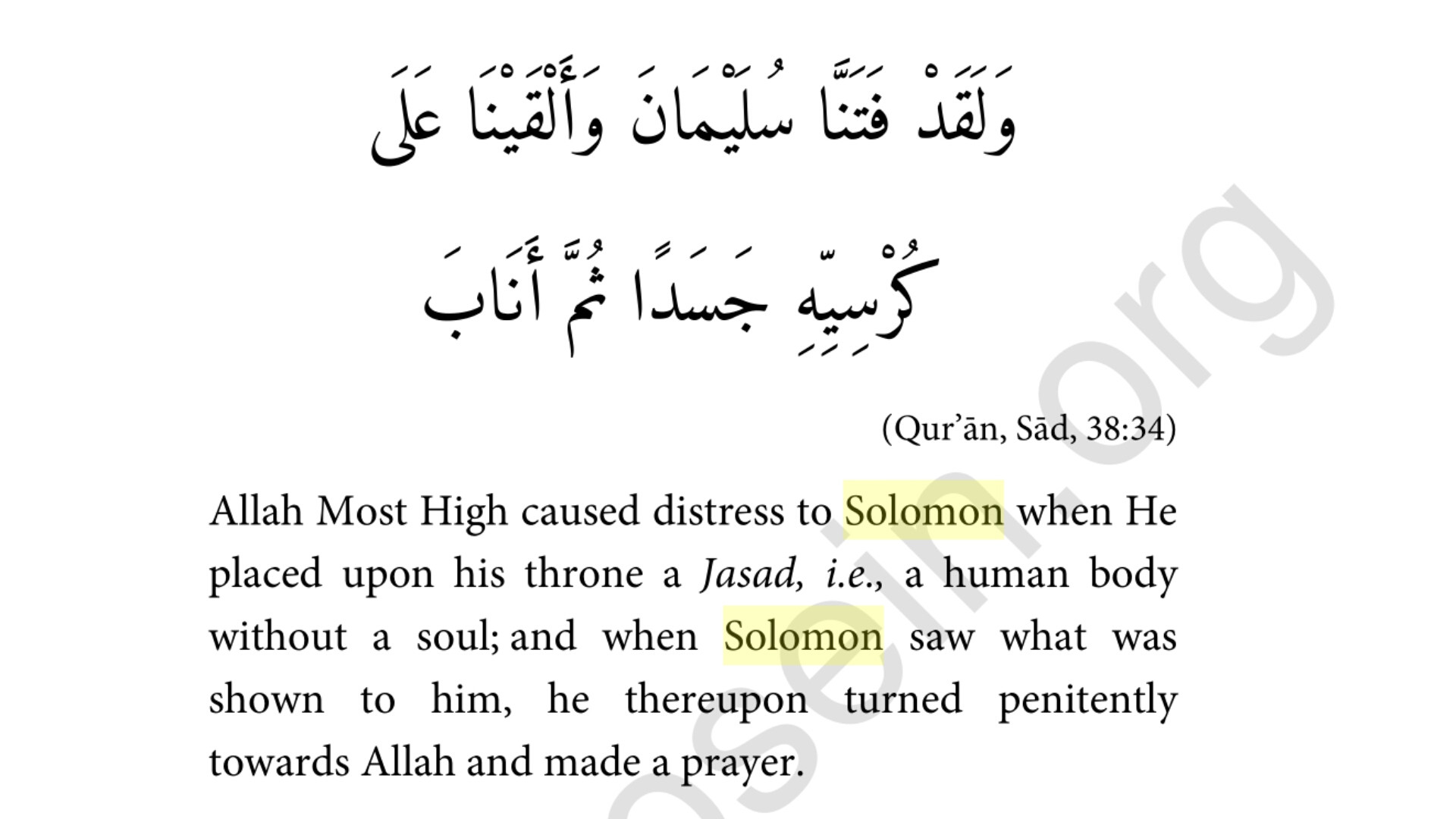 How did this become sunnah to seek protection from dijall ! Because i agree with the people who say is a hoax . allah clearly says" there is none like him" he allah swa ask a qustion in quran also something like. "in wich hadith will u rely on next " meaning that is Quran is the only hadith authentic , the prophets lifestyles had mistakes and and emotions like all human being . the prophet noah preached about dijjall and rasul joked about dijjall true indeed but rasul lu lah saw also asked allah for forgiveness from his mistakes and his sence of humor and plain out asked for forgiveness of innovation. The first book of hadis was granted to the prophet saw . people who say he was walking quran must understand that was not literal . the rasul says to follow bilal raw. Because he is a successor and for the ulima to imulate him becaus. , he the rasul saw. was insecure on reaching jinna the proof is there. !!!!!!!! but i think what has happened is that instead of worship to allah ; some send worship to muhammed so........ my example is when tne rasul died bilal raw. Did not want to call tbe ahdan and when he did offer the ahdan the people cried so hard bilal left Bilal raw. says this when the prophet died ,"Whoever worships Muhammad (pbuh) should know that Muhammad (pbuh) died. Whoever worships Allah should know that Allah is Hayy (immortal).”[3]

Then, he recited the following verse:

“Muhammad is no more than a Messenger: many were the Messengers that passed away before Him. If he died or was slain, will ye then turn back on your heels? If any did turn back on his heels, not the least harm will he do to Allah; but Allah (on the other hand) will swiftly reward those who (serve him) with gratitude”[4]

Not the answer you're looking for? Browse other questions tagged quran day-of-judgement dajjal .

4
How to read these verses in the Quran?
2
Is the hadith regarding Dajjal (the anti-christ) on a sail boat authentic?
5
Why is the Quran so hard against those who questioned the prophet?
2
Where is self-denial mentioned in the Quran?
4
What was Palestine called in the Quran?
0
Quran in Arabic and Only Translation
1
Case of a Prophet / Revered Person in the Quran that says Alhamdullillah
2
Is it mandatory to mention person name for Qurbani?
1
Is there a second coming of Jesus in Islam?