Why do Muslim women need to cover more than men?

I was talking to a non Muslim and she thought it was objectifying women that they have to cover up and how come the coverage is not equal between the genders? How do we answer this?

The reasons given in the Qur'an for hijab:

O Prophet, tell your wives and your daughters and the women of the believers to bring down over themselves [part] of their outer garments. That is more suitable that they will be known and not be abused. And ever is Allah Forgiving and Merciful. -- Qur'an 33:59

So we have three interrelated reasons:

So, which of these apply to Muslim men?

I think it's safe to say that men experience far less sexual harassment than women. It's also probably safe to say that a woman's body is sexualized in a way that a man's body isn't. So the latter two reasons don't apply to the same extent to men. However, it is certainly acceptable in Islam for men to choose to conceal their body also.

This makes "being known" less critical for men; e.g., a Muslim woman in hijab is implicitly declaring that she believes zina (fornication) to be a major sin, which may be off-putting to men with improper intentions. Nevertheless, Muslim men can be recognized in other ways, e.g., beards, caps, more frequently going to mosque.

Moreover, women are typically regarded as more social than men; we rely on our sisters for a lot of things (e.g., safety, compassion) and it is generally helpful to be able to recognize a sister.

It's not necessarily an Islamic law, there are about 17 states that don't allow women to be topless in their states. It's more common sense. Orthodox Jews observe hijab, even some Christians do. 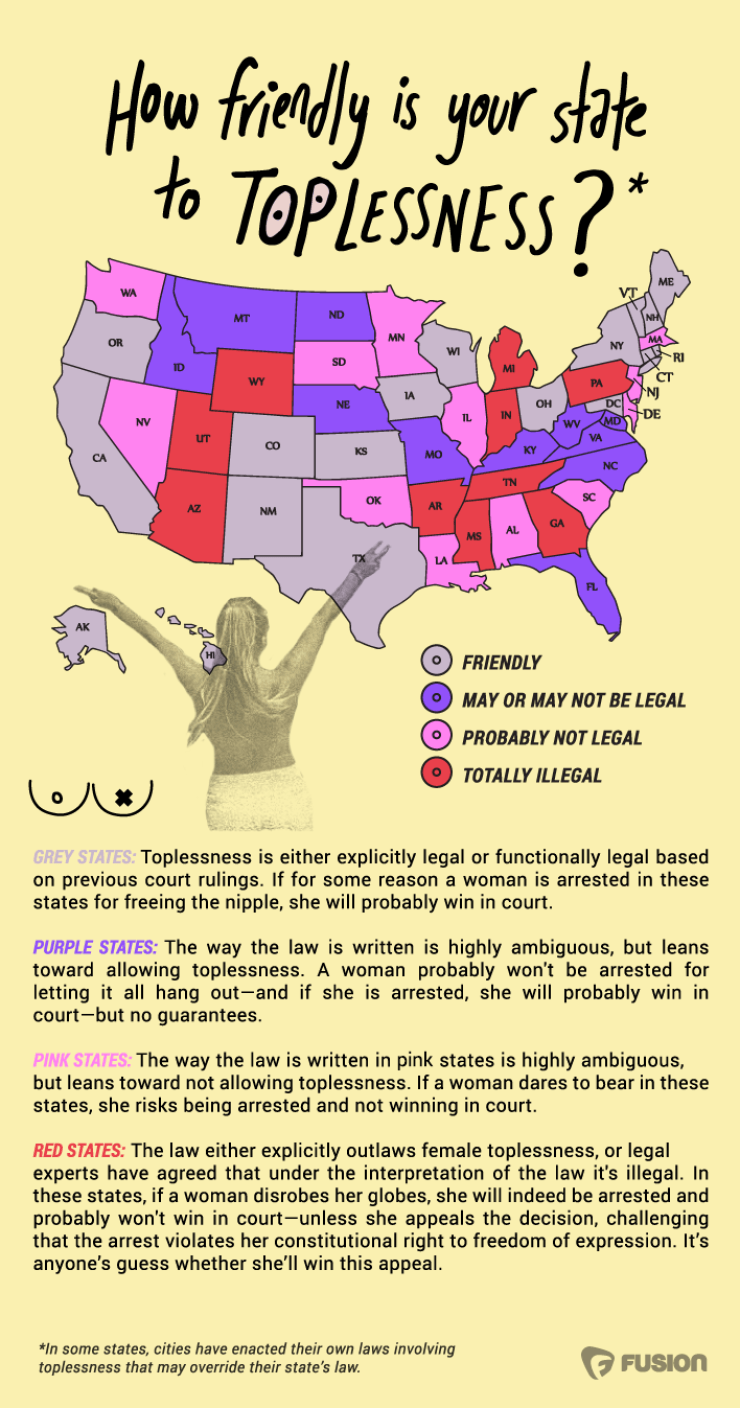 In addition, something I found from here

"For all the people out there who cry it's sexist that women can't go around topless, I am going to give you an irrefutable argument to why it isn't sexist. A woman is topless, a man "accidentally" gropes her chest, he's going to be spending the next few years in prison and registering as a sexual offender. Next scenario. A man is topless, a woman "accidentally" gropes his chest, even if he does freak out, which he probably wouldn't, but if he did, the entire police station will laugh him out of the station for reporting it. The reason it is illegal for women to walk around topless isn't for the children's sake. It is because there are completely different rules and regulations when it comes to men and women and their bodies. (sure you can say double standards are sexist, but I don't hear any women complaining about my above double standard). If the day comes when grabbing a woman's chest isn't grounds for being arrested, sure then you can say it's sexist that women aren't allowed to go topless. Furthermore, breast are the MOST sexualized object in the world, more than the phallic symbol. And yes, women are responsible for this, not men. Women explicitly attempt to make their chests more predominant to make themselves appear more attractive to men. Breasts are not just a sign of femininity in terms of children and breast feeding, they are sign of sexual maturity, as in, a sign that this woman is ready to mate, have sex, so yes breast are just as much a lusting symbol, as they are a symbol for "the cradle of life"

Basically the breast of a women is deemed as something that is sexually appealing, so is her face—more than men. Men and women are stimulated differently. ‌ The above mentioned are reasons that undermine her premises.

But as for why we do it?

I'll give you some hints/admonitions, ask your friend about covering in general: "as why do have to cover ourselves?" If she says humans are to be free to do as they wish, then end the discussion right there without a doubt with calmness and kindness. But if she says there should be, then ask her what parts? Why? From there you can build a foundation, of shame (حیا)

Having that I recommend you to be proud of your religion and avoid such debates, debates are not welcomed in Islam, unless you have an audience who's listening to the conclusion of the debate. IF your friend is humbly asking then answer. The moment you see her denying stop right there.

To me my religion; To you yours.Al-Kafirun :6

Some have misunderstood me and said this is intellectual dishonesty:

this is to address the comments below

So if I'm talking about heaven and hell to a person which doesn't believe in God, I should first discuss God. Then if you gave your reason and the person denies then hear them out. If you didn't agree then stop (or they didn't then stop). Don't repeat your words 49 times. Yet if the person was confused by 90 questions then be humble and answer each and every one of them.

Have you not ever had a discussion with a person (sometimes loved ones) who don't want to accept what you are saying? (Or sometimes have you turned into a person who doesn't accept the truth. I've made such mistakes before and will do more again unfortunately.) If you arrive at such a situation then continue the discussion has no value.

On a very very different level of not accepting things: Quran says:

3
Is being recognized as Muslim one of the reasons for hijab?