Is familism part of Shia Islam?

So far as I know, prophet Muhammad (pbuh) is not for his family rather he is for the whole mankind. He had no son left. I think the prophet (pbuh) has no successors except those who were and are in right way in terms of Qur'an and sunnah and also those will come as same.

Is the idea behind Shia Islam narrow, in that it confines Islam to a familism?

Familism in the popular sense is not part of Shia Islam. The concept of Imamate (leadership) of Ahl al-Bayt (people of the house) of the Holy Prophet (pbuh) refers only to those family members and descendants of the Prophet who were qualified by Allah for their actual unique virtues to assume the leadership of the Ummah. So in essence, they are given their role not essentially for blood relations, but for their special virtues such as infallible wisdom and practice. Blood relations is only influential to the level that facilitates transmission of God-given wisdom and virtues of the Prophet to them but is not significant in and of itself. Just to mention a random testimony to the point, Prophet Muhammad is quoted as saying that "Salman (a close companion) is part of us Ahl al-Bayt" while Salman was a Persian convert to Islam with no blood relations with the Prophet at all, yet for his special wisdom and piety, He got so close in virtue to the elite members of Prophet's household that the Prophet described him as "part of us Ahl al-Bayt".

Obviously then the doctrine of Imamate of the elite family members has no bearing on who can enter Shia Islam and Shia Islam is completely non-racial in admission of new members. If anything, the Shia doctrine of Imamate from Ahl al-Bayt has only a positive effect on universal outreach of Islam. For the Imams of the Ahl al-Bayt assume the function of legitimate leadership of the Ummah after the Prophet and they are the ones who actually best express the universal wisdom of religion through their intellectual elaborations of Islamic theology and judicious application of Islamic law.

As an actual example, only Ali ibn abi Talib among the caliphs who ruled the Ummah is particularly known for his egalitarian approach and equal treatment of all Muslims regardless of race and career while the other caliphs especially the Umayyads used to discriminate against non-Arabs or the new converts. Imam Ali's letter to his governor Malik is particularly famous for its egalitarian, universally benevolent theme.

Some of the women of the Shia Imams used to be non-Arabs such as Robab wife of Hussain, the second Imam of the Ahl al-Bayt and Narjis the mother of the last, occult Imam Muhammad al-Mahdi, who was a Byzantine Christian convert to Islam.

In line with these characteristics, you find that Shia scholars also hold non-sectarian, non-racial approaches to human society. For example, Ruhollah Khomeini the founder of the Islamic Republic of Iran throughout his political career frequently stressed the importance of Islamic unity among the sects as well as formation of a cross-cultural, cross-national "global coalition of the oppressed" for resistance against oppressive world powers.

So no! Shia's regard for the elite members of the Ahl Al-Bayt far from narrowing its outreach, opens it more than any other sect to a universal audience and that's precisely rooted in the universal interpretation of Islam by the Ahl al-Bayt.

Are you talking about leadership of the Ummah? You can see it 2 ways:

And [mention, O Muhammad], when Abraham was tried by his Lord with commands and he fulfilled them. [ Allah ] said, "Indeed, I will make you a leader for the people." [Abraham] said, "And of my descendants?" [ Allah ] said, "My covenant does not include the wrongdoers."

So Ibrahim asked that others from his children be positioned as Imams. And Allah was like sure. Just not the wrongdoers. In the section below we will see that Allah fulfilled his promise.

The family tree of prophets before prophet Muhammad 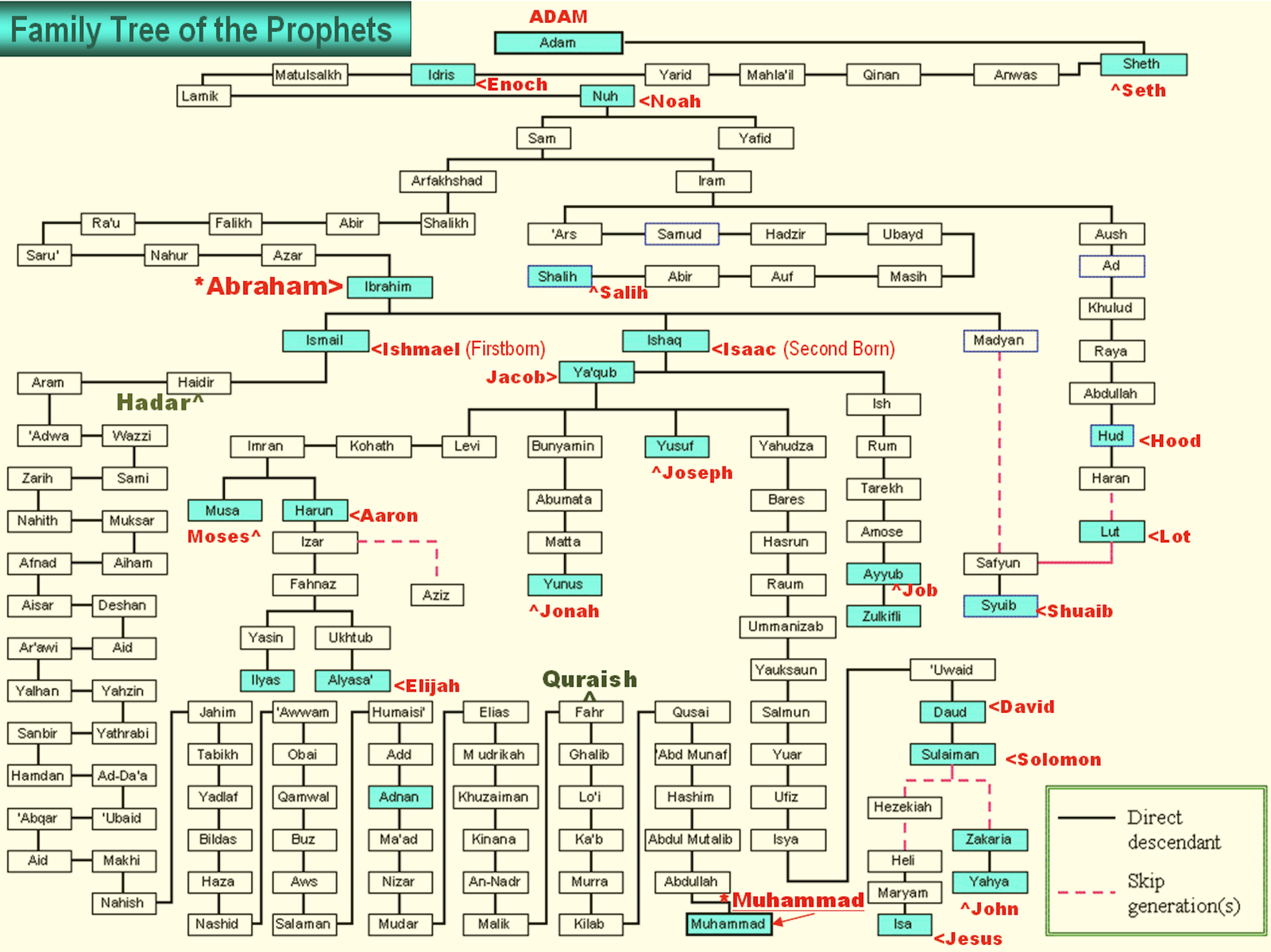 As you can see lot of prophets are from the lineage of Prophet Ibrahim (PBUH).

From Ismael: Prophet Muhammad was born

It was actually easier to follow this way, I mean imagine that upon the death of every prophet a new family had to came in to play. God didn't wnat to create more struggle. I mean Moses appointed his brother. Went back to the mountain of Sina, came back and the people had already turned against his brother. A person who's from the family of the predecessor is situated at a more powerful position and people are more accepting!

More specifically about the family of the prophet

Allah intends only to remove from you the impurity [of sin], O people of the [Prophet's] household, and to purify you with [extensive] purification. https://quran.com/33/33

In addition because not everyone can become the divine Ummah's leader, there will be more touchstones for who is to be leader. A regular Arab person can't become a leader. In the past centuries many people ( such as Mahdi Sudani, Mirza Ali Muhammad Bab, Qulam Ahmad Qadiani, etc.) claimed to the (false) Mahdi but because none of them had the unique lineage of:

Mahdi Son of Hassan al-Askari, born at the year of 255 Hirji Qamari...none of them were true Mahdis. His lineage makes him unique.

Muhammad was the pride of Arabs and Quraish

...Minhal ibn Amr met with Ali ibn (AS). Minhal said: Oh (grand)son of the prophet, How did the morning come upon you?

Imam Sajjad: Oh Minhal, shame* on you! If you want to know how the morning came upon me then know:

The morning comes upon us, while we (the family of the prophet among this nation) are like the nation of Israel. "slaughtering our sons and keeping our females alive14:6".
The morning comes upon me, while the best of people after the prophet ( Ali son of Abu-Taleb) have been cursed at the tribunes...Our enemies have been given given wealth and rank...Our lovers have been humiliated and their rights are taken away. This has always been the story of believers.

My days go by while Ajam knows a right for Arabs because Mohammad was from them,

and my days go by while Quraish take pride over Arabs because Muhammad was from them,

and my days go by while Arab knows a right for Quraish because Muhammad was from them,

and my days go by while Arab takes pride over Ajam because Muhammad was from them,

and the days of us the Ahl al-Bayt go by while they know no rights for us, ...that how it is Minhal!

Yazid b. Hayyan reported: We went to him (Zaid b. Arqam) and said to him. You have found goodness (for you had the honour) to live in the company of Allah's Messenger (may peace be upon him) and offered prayer behind him, and the rest of the hadith is the same but with this variation of wording that lie said: Behold, for I am leaving amongst you two weighty things, one of which is the Book of Allah, the Exalted and Glorious, and that is the rope of Allah. He who holds it fast would be on right guidance and he who abandons it would be in error, and in this (hadith) these words are also found: We said: Who are amongst the members of the household ? Aren't the wives (of the Holy Prophet) included amongst the members of his house hold? Thereupon he said: No, by Allah, a woman lives with a man (as his wife) for a certain period; he then divorces her and she goes back to her parents and to her people; the members of his household include his ownself and his kith and kin (who are related to him by blood) and for him the acceptance of Zakat is prohibited.

In addition Ismael was son of Ibrahim, Yusuf was son of Jacob, in our daily Tashahud we say اللهم صل علی محمد و آل محمد , there are many verses in Quran speaking nobly of the house of a prophet I mean ال ابراهیم or ال عمران .

Or do they envy people for what Allah has given them of His bounty? But we had already given the family of Abraham the Scripture and wisdom and conferred upon them a great kingdom.https://quran.com/4/54

Prophet Muhammad is a descendant from Prophet Abraham.

My point is: historically Arabs, Quriash take pride because Muhammad was from their tribe, nation, but ultimately the Ahl al-Bayt are more deserving of pride. Additionally, the Quran and the narration above is pointing us to the Ahl al-Bayt. Other verses are showing us that the family of Abraham (and therefor the prophet's family) are of the chosen families.

Banu Ummaya was a family dynasty, Banu Abbas was a family Dynasty, why can't Shia also have a family dynasty, with the significant difference that none of the Shia leaders fought to become the ruler—unless the people wanted them. [Ali was the leader so as his duty he defended the Ummah and fought Muawiah, Hassan was the leader but due to his men being bought by Muawiah he made peace with Muawiah. Hussain wasn't the leader, but people wanted him to be, once the people withdrew their support he decided to abort his mission... Yazid didn't want to allow Imam Hussain walk away. He only wanted his life. As a result of Imam Hussain's self defense the battle of Karbala happened. All other Imams didn't do a thing against the rulers of their time because people didn't support them. Instead they were either teaching (Imams Sajjad, Baqir & Sadiq), having intellectual debates (Imam Reza), imprisoned (Imam Kazim) or on house arrest (Imam Hassan al-Askari)]

*Imam used that language as in: Don't you see what's happening/happened to us? How people have forgotten us? It's like someone losing family and then someone asks how was your day!

Not the answer you're looking for? Browse other questions tagged shiism theology family .

13
What are the sources of Legislation in Shia Islam?
6
Is "imam" greater status than prophet?
6
Who are the guardians of Mecca according to Shia theology?
4
Is Muhammad (PBUH) Infallible according to Shia Islam?
8
What theological and historical factors distinguish Ibadi Islam from either Shia or Sunni schools?
5
Are Ayatollahs Khomeini and Khamenei authorities in Shia Islam?
3
Is smoking cigarettes prohibited in Shia Islam?
1
Were there non-Imam Prophets as per Shia Islam?
2
Does Shia Islam have any narration where attributing a lie to the Prophet is a grave sin and leads to hell?