For those interested, I'll also be asking this question on Christianity.SE and Mi Yodeya (with respect to those religions).

In recent rallies, protesting what is perceived as bigoted policies by president Donald Trump, several individuals who are not in fact Muslim and do not subscribe to the Islamic faith have claimed they are Muslim in a show of solidarity with the Muslim world. 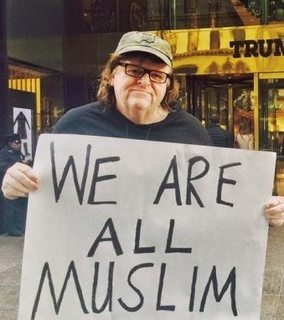 While I generally understand that not subscribing to the faith in general is sinful, I'm curious about the act of proclaiming that you are an adherent when that is not true (I'm asking in particular about the sin of falsely claiming adherence to the faith, this should be understood as being a different or greater magnitude sin than simply violating any general rules about lying or telling falsehoods).

There are always two sides of the medal: If the intention is good I'd say it can be considered as a good deed, so it isn't sinful. But from an other perspective (pure theologically) it could be considered as hypocrisy. Again on the other hand showing solidarity and having a clear position is anything but hypocrisy! This of course is my analysis from the perspective of Islam.

But the Quran and sunnah seem to reflect that good deeds of a disbeliever (as long as he doesn't convert) won't help him on judgement day:

At the end it is up to Allah not to us to judge! Allah says:

Note that the whole surah addresses the people -in general- not explicitly the Muslims! So one could conclude "whoever" here as referring to both Muslims and non-Muslims. And this surah is Madani or Makki according to some sources (see wikipedia). If it is Makki one could conclude that it was abrogated by the verses quoted above.

Regardless of the issue of solidarity, do non-Muslim sin when they eat pork, worship before statues, or fail to perform the five pillars of faith? From a Muslim perspective, non-Muslims are by definition living in a continual state of sin. This specific act would be no different.

But should this incident be considered blasphemous, disrespectful, or offensive?

When Michael Moore and others hold up those signs, they really don't mean it literally, and don't expect anyone else to take it literally. They aren't making a false claim in order to hurt anyone or to take personal advantage of it (e.g. to visit holy sites).

The sign itself might be too short and simple, but its intended message is far from being a sin.

How can helping an oppressed people, even in such a way a showing solidarity, ever be considered a sin? Moroever I don't think it is their intention to actually become Muslim or even pretend to be Muslim, it is just a way of showing their support.

So I don't think it is a sin, but Allah is the Judge and He Knows best.

11
What is the Muslim definition of sin?
3
Is it haram for a non-Muslim to perform Muslim prayers?
0
Pray for a non-Muslim when he/she dies
2
What would you recommend to a non-Muslim wanting to learn more about the Islamic faith?
0
What is the award for non-Muslim on their best deeds?
2
Giving Sadaqa for non Muslim
0
Would we able to meet the Non Muslim person whom you love in jannah?