Examples of verses of the Qur'an with two different readings?

According to What are the readings (qira'at) of Quran?, there are different "readings" of the Qur'an. I'm seeking concrete examples of ayat (verses of the Qur'an) for which there are two or more non-identical sequences of Arabic words which would both be regarded as correct.

Question: What are some examples of ayat with two or more different readings?

They don't have to be substantially different (presumably, they wouldn't be), just not word-for-word identical. The motivation is to get a better feel for how different the different readings can be.

(There seems to be some relevant material between Answering Islam and Answering Christianity, but these are debating sites and I don't trust them.)

As you are not familiar with Arabic language it is difficult to explain, basically the rasm al-Othmany still allows some "linguistic interpretation" as at the time the Arabic language didn't consist of 29/30 letters and most of that amount was of letters which looked the same (as I stated in my answer of the Question about qira'aat)... but let's start with the example given from surat al-Humazah 104 سورة الهمزة:

Let's say the rasm al-'Othmany is this:

While the rest of the seven quraa' like Nafi' نافع (Medina) teacher of Warsh ورش and Qalun قالون, Abu Amr (from Basra), al-Kissa'iy الكسائي (from al-Kufa) and ibn Kathir ابن كثير (from Mekka) were reading it yahsibu:

This also applies to other present conjugations of the verb hasiba حسب:

Other differences in surat al-Humazah:

Note: If I say instead of "x" I mean that "x" is the reading followed by the majority among the 7 qiraa't!

Note that these kinds of hamzah were "too heavy" for most Arabic tribes so Quraish never used to pronounce it while Hudhail used to taht's why they primiraly appear in most Kufi-qiraa't as they were following the reading of the hudhali sahabi Abudullah ibn Masu'd for a long time before accepting the rasm al-'Othmany.

Al-Kufa readers ('Asim, al-Kissa'iy and Hamzah and their students) except for Hafs read (104:9):

None of these differences has an impact of the meaning! It is like a word that can be spelled or pronounced in different ways.

This is a link to audio files of the Egyptian Sheikh of qiraa't Ahmad al-Ma'srawy أحمد المعصراوي were you may find the 10 different qiraat of the Quran to compare surat al-Humazah is apparently always present, normally all 20 riwayas (narrations) should be available, but on this link some are not (Hafs is the most striking absent one!). Maybe you can find the missing ones on an other rather salafi site called islamway.com.

Examples of general rulings in the seven qiraa't

Be aware that some difference come from "technical" tajweed details such as how and when to prolong a letter etc.:

Some differences in surat al-Kahf

It is a long surah and as said there are some basic differences which are of general use I've quoted a few already and left out many more. So I'll just pick some examples here and there for this surah!

As said this is just a sample there are a lot more differences, some can be explained by general rulings of a reading others are single cases in this actual surah.

I get the feeling you are more after in terms of the wording then the sound (in which case I have no idea), but in case you are interested:

Some audio examples for Surah Humazah:

Video 1 (Hafs I think but please don't quote me. FYI this is the one I hear most commonly in Australia at least, can't speak for anywhere else. But maybe if you are going to memorise a style go for this one?) 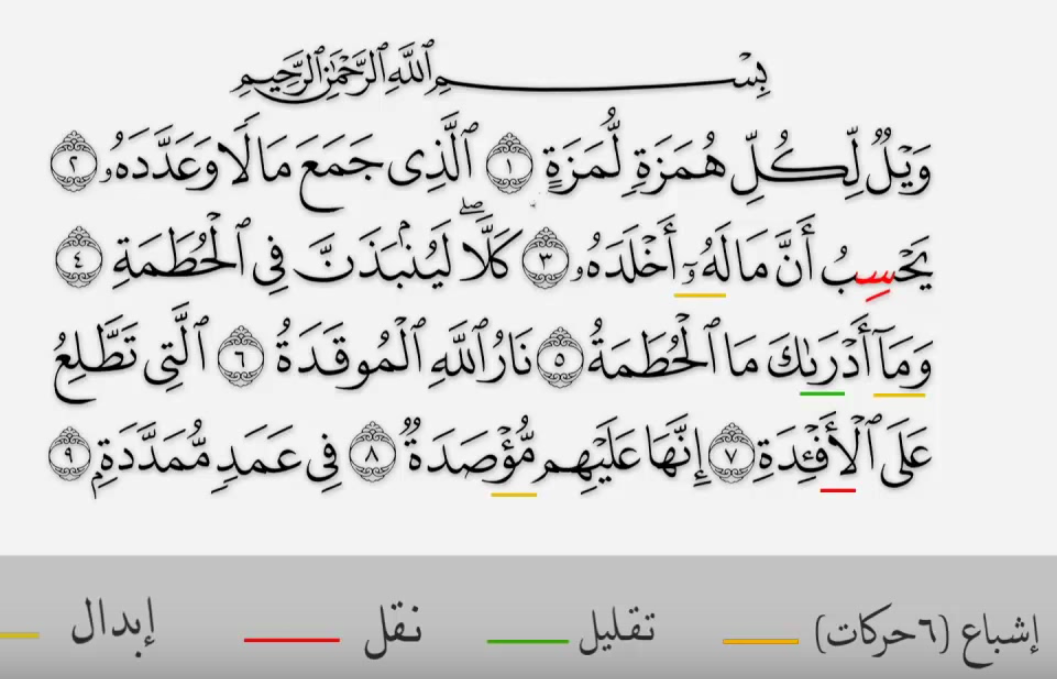 If you want to find more just type the surah name followed by the name of the riwayat (listed on the link you linked in the question).

Not the answer you're looking for? Browse other questions tagged quran qiraat .

20
What are the readings (qira'at) of Quran?
5
Quran originally without vowel marks?
7
Are ahadith generally considered to be paraphrased?
3
Examples of Quran verses that differ from normal recitation?
4
What happend to the second garden of the disbeliever?
1
Why would Muslims believe the Bible has been changed?
1
Why is the quran as well as some hadiths considered perfectly preserved while other hadiths are not?
2
Seeking modern proof that the Quran hasn't been changed?
1
Is there a difference in the Arabic wording of Sura 37:12 among the various Qiraats of the Quran?
1
How are the "seven different ways" from Sahih Bukhari, book 61, hadith 513 reflected in Quran?
See more linked questions

4
Did the stories in Quran happen as is, or are they symbolizing different and more common events?
11
Why are Surat al-Khal and Surat al-Hafd not included in the Qur'an?
20
What are the readings (qira'at) of Quran?
3
Difference of waqf in Qiraat Hafs between waqf الوقف in usual Moshaf and turkish recitation
6
Different versions of Arabic Qur'an
4
Meaning of ' بين يديه '
2
Should Qur'an 54:17 be interpreted as meaning the Qur'an is intended to be simple to understand?
3
Examples of Quran verses that differ from normal recitation?
1
Does memorizing the Qur'an, but parts of it in different rewayat still make you a Hafiz?