Many a times, I miss to pronounce various Arabic letters correctly, which leads to reading the Holy Quran incorrectly. Some of the tricky alphabets include:

I want to mention that I already know Arabic, but I am facing difficulty in understanding the true pronunciation of certain alphabets.

Can anyone please help me out on this?

To know where the letters Arabic are "pronounced" from is important to learn reading the Quran and speaking Arabic correctly. The first thing a student of tajweed learns is the so called مخارج الحروف Articulation of sound, there he learns how each Arabic letter is pronounced and where the phonation is localized. Unfortunately I'm neither a great linguist in Arabic nor do I have good enough translation skills to explain it well. I hope this picture gives you an idea where in the phonation of each Arabic letter is "done" 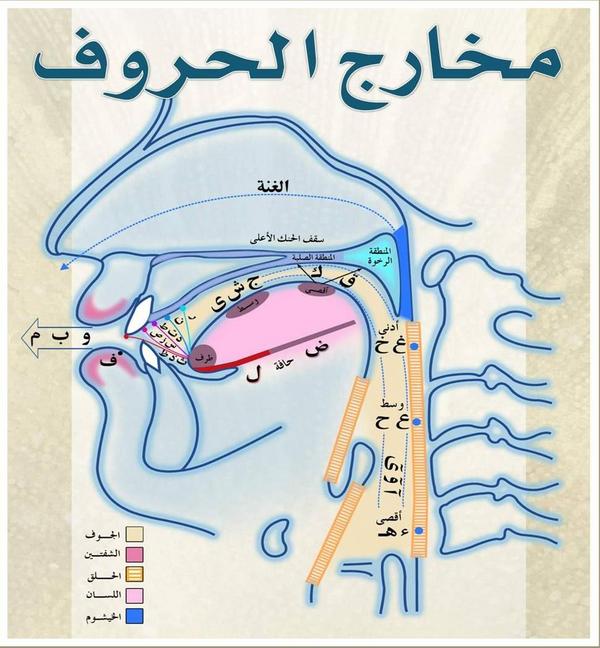 This picture already shows a big difference of the origin of the phonation of each of the letters you quoted!

Here a kind of explanation for some of your examples (as this is in first place my interpretation, be aware that it could be wrong to some extent):

The major difference between the 'ط' and 'ت' is that the first sounds more like a strong emphasized "t" like in "total" while a similar letter to 'ت' doesn't really exist it is like a not emphasized "t" even less emphasized as in "split".

"ض" is like a strong emphasized "d" like in "Donation" (but much stronger), while 'د' could be pronounced equal to a "d" at the end of an English word "extend".

'ظ' is near to a "th", but generally I would prefer to transliterate it as a "dh" as the sound of "d" must appear while pronouncing it at last to some extent (therefore I think transliterating ظهر zuhr or zohr is wrong and it should be dhohr or dhuhr).
'ز' is generally similar to the English/French "z" like in "Zoo".
'ذ' is a bit tricky it has elements of "d" and "dh" so it is a "dh" based on the correct pronunciation of 'د'.

Here's a video (youtube) teaching the مخارج الحروف in Arabic by a scholar.

Not the answer you're looking for? Browse other questions tagged arabic quran-recitation reading-quran pronunciation .

0
How to pronounce these six difficult-sounding Arabic letters?

23
What does Islam say about reading the Quran in a language other than Arabic?
5
Recitation of the Quran without understanding Arabic
3
How important is vocalization?
1
Do you need to know a Surah beforehand in order to read it fluently (in Arabic)?
2
How should I practise Arabic in order to read Quran?
4
Meaning of ' بين يديه '
2
Can i read the translated Quran without wudu?
1
When reciting the Quran, what is the proper pronunciation of the Arabic letter ط?