Is there a consensus that eating with a knife and fork (as in Western culture) is unlawful? 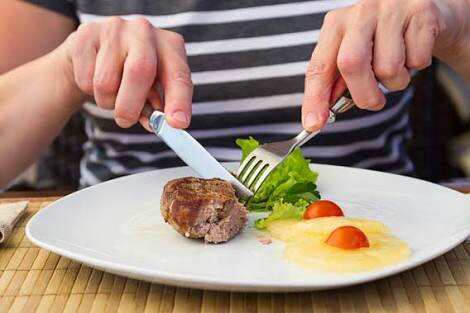 I found this fatwa:

It is unlawful to eat with the left hand using a fork or your bare hand as the Prophet (Sallallahu Alaihi wa Sallam) said: "Say Bismillah, eat with your right hand and eat from what is nearer to you". -- IslamWeb

It strikes me as a very strong prohibition. The other two points in the Prophet's statement don't strike me as obligatory.

Question: Is there a consensus that eating with a knife and fork, as in Western culture, is unlawful?

I'm wondering if this is a mainstream viewpoint. It would take a lot of practice to get accustomed to eating in another way, and people will probably think it's inappropriate.

As said by other comments and answers the main issues of eating with fork and knife as in western culture are: The (quasi) prohibition of eating with the left hand and the other issue is the imitation of non-Muslims.

AFAIK or at least I've been told american people have the fork in the right hand so this way to eat would at least eliminate the first possible issue. Note that if somebody is injured or can't eat with the right hand for reasonable reasons (what ever that might mean) it is permissible for him/her to eat with the left hand.

For the second issue especially I found many modern or contemporary scholars having no consensus for example on Islamweb the muftis seem to follow the view that using tools to eat is rather frowned upon, but one could use them for necessary acts, for example cutting with a knife using a spoon to eat supper and so on, while salafi scholars as presented by many different posts on a similar question in this thread (Arabic) show that some allow it some prohibit it for one of the above reasons quoted above.

For example sheikh al-Fadil as-Su'aidan الشيخ الفاضل السعيدان consider it as prohibited because of the imitation of the kuffar (disbelievers), ibn Jabreen however say it is not an imitation of kuffar as they are not the only one to do it, al-Labani at least considered using a spoon as allowed (even if it has no backup in sunnah). While the saudi fatwa council declared it as allowed and not at all an imitation of non-Muslims as you may read [here (islamqa #112005).

While in my search i found the shi'a marji' Sistani quoting:

25 - Do not to cut bread with a knife ٢٥ ـ ان لا يقطع الخبز بالسكين.

among the etiquette of eating and drinking.

On islamweb (based on this Arabic fatwa #51496) they also added some reasons for the dislike of eating with a spoon (and one could follow by analogy that this is the case for a fork two):

But they consider eating with a spoon as allowed, however the best way would be eating with the (right) hand. As this is the way of the Prophet () and the salaf.

The background of the Hadit is cultural, not religious. In the times of the Prophet Muhammad ﷺ, Arabs, including the polytheists, as all other people around did not use knife and fork, and neither soap nor toilet paper had been invented. It was good manners to have a clean hand and a dirty hand. That Muhammad ﷺ insisted in keeping to good manners does not mean that there is no other way to keep good manners. Europeans nowadays all eat with knife and fork as in Australia, no matter whether Muslim or not. The fact that something is reported in a Hadit Sahih need not mean that it is a commandment of God, nor an original rule of the Prophet ﷺ.

In Islamic teachings Muslims often confuse the forbidden with the discouraged and disliked. So eating with the left is "disliked" (Makrooh)but not forbidden or prohibited. Even the Prophet PBUH did not say it was disliked, he insinuated it was "desirable" (Mustahab) to eat with the right, but people turned it into the left being "Makrooh". The exact Hadith was the prophet educating the nomads about eating etiquette -if you will, He said: "Start in the name of god (Bismilla), Eat with your right, and Eat from what's in-front of you". Its a general opinion not an order or directive and definitely not a prohibition. I say if you can try then do, as we all try to emulate the prophet - if we could. But if you couldn't don't worry about it. Just start in the name of god (Bismilla) and when you finish end it with AlHamdulillah. And if you don't do that that's fine. No compulsion in religion, as the Holy Quran tells us.

There's nothing wrong with eating with a knife and fork. The prohibition with not eating with the left hand comes from a cultural milieu where eating with one's hands was the norm.

In the West, where eating with a knife and fork is the norm, the prohibition does not apply. After all, the left hand does not touch the food.

It's worth pointing out that forks, although now seen as Western, they weren't historically Western. The first forks were found in the bronze age Qijia culture in China. And in the West, forks were adopted from the Eastern Roman empire. In fact, table forks were common in the Middle East by the 10th C. It was then gradually adopted by Italy in the 16th C, but not by the rest of Europe until the 18th C. It's strange to think of knives and forks as Middle Eastern, when they are now known as quintisentially Western. It just goes to show how fashion in table manners change across cultures.

Satan eats with the left so a left handed person should be trained from childhood to eat with his right (like my sister). If one has no right hand or is disabled etc then it is allowed. You need to tell the people on your table that you eat with your right cite this Hadith and the one in your post just like you'd tell them you don't eat pig or haram meat it has to be made halal Islamically slaughtered and you don't drink alcohol. http://en.islamtoday.net/node/1841 I think there is an irony that non Muslims in general eat the food with the left like Satan when using a knife and fork!!!

From experience I have never been questioned if you eat with the knife and fork the other way round, they would just think you had made a mistake and query and you can tell them in Islam we eat with the right and handshake with right but for the toilet use the left.

(Compare with the non Muslim who eats with the right hand directly items such as a sandwich and handshaking but with the same right hand uses it for the toilet !

Muslims use a different hand for the toilet than for eating and the handshake which is always with the right. Allahu Akbar.)

Not the answer you're looking for? Browse other questions tagged food .

4
To what extent are reverts required to avoid behaving like non-Muslims?

5
Is there an authentic source for the hadith where the Prophet and Ali ibn Abi Talib joke about eating dates?
3
Is there a ruling for giving and returning the Salam while eating?
10
Do left-handed converts need to start eating with their right hand?