Allah name in clouds is Allah's miracle or are a part of random design? 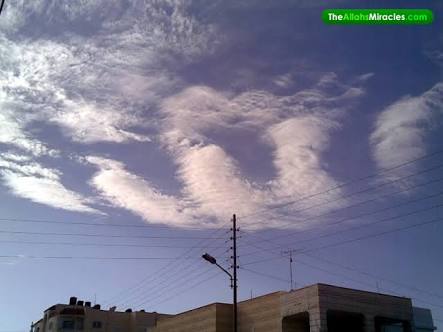 Are they really message from allah then what allah wants us to show from these?

That there is a sky with clouds moving around in it. Allah's miracle:

He created the heavens without pillars that you see and has cast into the earth firmly set mountains, lest it should shift with you, and dispersed therein from every creature. And We sent down rain from the sky and made grow therein [plants] of every noble kind. -- Qur'an 31:10

Do you not see that Allah drives clouds? Then He brings them together, then He makes them into a mass, and you see the rain emerge from within it. And He sends down from the sky, mountains [of clouds] within which is hail, and He strikes with it whom He wills and averts it from whom He wills. The flash of its lightening almost takes away the eyesight. -- Qur'an 24:43

That you're alive and have the ability to see the sky. Allah's miracle:

And He is the one who gave you life; then He causes you to die and then will [again] give you life. Indeed, mankind is ungrateful. -- Qur'an 22:66

And Allah has extracted you from the wombs of your mothers not knowing a thing, and He made for you hearing and vision and intellect that perhaps you would be grateful. -- Qur'an 16:78

That some clusters of water vapour in the sky approximately resemble the short word Allah (الله)...? I do not think it's befitting to attribute something so meagre as one of God's miracles.

It's also risky to value these things highly, because clouds also randomly form non-Islamic shapes, e.g. a crucifix. Patterns will also randomly appear in mediums that would not be considered appropriate (e.g. birthmarks on pigs, a splattering of urine on the bathroom floor).

If you look at enough data you will find patterns, regardless of whether or not the patterns are meaningful. How many clouds does one have to inspect before discovering one that resembled Allah in Arabic? In science, we use statistical significance testing to filter out what could happen just by chance. Perceiving familiar patterns in randomness is called pareidolia in psychology.

Basically, it's best not to take these things too serious, saying "oh, that's cute" and move on.

A miracle is an event not explicable by natural or scientific laws. Such an event may be attributed to a supernatural being (a deity), magic, a miracle worker, a saint or a religious leader.

Formation of Allah's name in clouds, trees, fishes, goats etc can be explained by scientific laws. Therefore, they are not miracles.

look i dont know how to explain it. our prophet is muhammad and he is the last prophet until now but its doest mean who worships islam ignore other religios. new prophet continues the unfinished job of the prophet before him. Allah is great and deserves all the great name's. God,Dios... and too many diferent name's in diferent languages. seeing allah name in sky is just miracle for us because we are the ones who understand it and seeing God name in sky is miracle for those who christian.

the point is god,allah,dios... loves anybody with any religios so when u saw allah or god or other name's in sky that's a miracle in your heart if you want to look at it by sciense its just a well shaped cloud not anymore.

sorry my english is not verygood.

Not the answer you're looking for? Browse other questions tagged allah names miracles .

6
Using the name of Allah or God in public in non-Muslim countries?
3
Is Allah part of Allah's 99 names?
0
Is Allah's name complete without diacritics?
2
Who is responsible for the misuse of materials with Allah's name on?
2
Are Jinns Another Name For An Angel
1
Swearing by Allah's Name
0
How to deal with papers on which Allah's name is mentioned?
1
Are supernatural encounters with Allah common in Islam?