salam alaykom brothers and sisters in islam as you may already know a lot of vegeterians and vegan cases that want to convert to islam but isnt sure that they can still be vegan or vegeterian , is it permissible for a muslim to be vegan ( against animal cruelty and sacrifice and with animal and nature peace ) and yet be a good muslim after all please give valid arguments about this matter knowing that sacrifice is only a sunnah and not their blood or their flesh that reaches Allah but attakwa ?

As a vegetarian Muslim, I found a workaround by donating to a mosque that will slaughter the same animal whether or not I donate. This provides sufficient diffusion of responsibility for me to feel comfortable about killing an animal, while still participating in an important Muslim event.

I personally do not feel that kindness to animals is a character flaw. I think it's reasonable to be hesitant to participate in this: 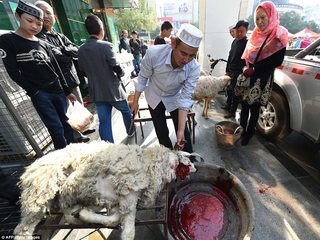 As a whole, the impression I got from reading the whole Qur'an was that (some) animals were intended to be eaten by man. One could reasonably argue that eating meat is encouraged by the Qur'an. For example:

Note that we also say bismillah ("in the name of God") over vegetarian food. Islamic Studies suggests the intention is to "recognize... as lawful all that God has declared to be lawful". Marwan Boustany similarly contests this is referring to meat literally, writing "This is not the case though, as Allah has not indicated this in these verses". Your mileage may vary as to whether or not this implies a command to eat meat or an assertion that it's okay to eat meat, or something else.

The Qur'an also has:

And the camels and cattle We have appointed for you as among the symbols of Allah; for you therein is good. So mention the name of Allah upon them when lined up [for sacrifice]; and when they are [lifeless] on their sides, then eat from them and feed the needy and the beggar. Thus have We subjected them to you that you may be grateful. -- Qur'an 22:36

It's hard to tell if this sacrifice should be interpreted as an obligation or not, but it's certainly not discouraged.

Some translations of Qur'an 21:107 include kindness to animals:

We sent thee not, but as a Mercy for all creatures.

while others do not.

We have sent you forth as a mercy to all mankind.

The seven heavens and the earth and whatever is in them exalt Him. And there is not a thing except that it exalts [ Allah ] by His praise, but you do not understand their [way of] exalting. Indeed, He is ever Forbearing and Forgiving. -- Qur'an 17:44

And there is no creature on [or within] the earth or bird that flies with its wings except [that they are] communities like you. We have not neglected in the Register a thing. Then unto their Lord they will be gathered. -- Qur'an 6:38

As far as I can tell, it's just wishful thinking to think they support vegetarianism.

In a way, I feel it's analogous to being invited over to someone's house, and when they offer you something to eat, you refuse. Well, we're in Allah's house, and he's offering meat.

The Prophet Muhammad was reported to have encouraged the slaughter during Eid:

The Prophet Muhammad was reported to have personally sacrificed animals:

The Prophet sacrificed two horned rams which were white with black markings and had been castrated. (Sunnah.com)

The Prophet Muhammad was reported to have encouraged the sacrifice of animals:

At the same time, the Prophet Muhammad was reported to have prescribed relatively painless methods for slaughtering animals:

Verily Allah has prescribed ihsan (proficiency, perfection) in all things. So if you kill then kill well; and if you slaughter, then slaughter well. Let each one of you sharpen his blade and let him spare suffering to the animal he slaughters.” (Sunnah.com)

And the Prophet Muhammad is also noted for promoting kindness to animals, including sparing their lives:

He who takes pity even on a sparrow and spares its life, God will be merciful to him on the Day of Judgement. (Islam and Animals)

There is a reward for kindness to every living thing (Sunnah.com reference.)

As far as I know, scholars agree that vegetarianism and veganism is fine (provided you're aware that eating meat is halal [with the exclusions in the Qur'an]). Some examples sourced from Fatwas on Vegetarianism (more are found by following the link):

So traditionally Muslims were semi-vegetarians. The Prophet was, I mean, technically, the Prophet (SAWS) was in that category. He was not a meat-eater. Most of his meals did not have meat in them. And the proof of that is clearly in the Muwatta—when Sayyidina Umar says, ‘Beware of meat, because it has an addiction like the addiction of wine.’ -- Hamza Yusuf

A Muslim may be a vegetarian. However, he should not regard eating meat as prohibited. -- Mufti Ebrahim Desai

The Salafi Islam Q&A say even veganism is okay:

Yes, you can be a Muslim without eating these animal products.

You should not think that it is better to abstain from these foods, or that doing so will be rewarded, or that a vegetarian is closer to Allaah than others, and so on. -- Sheikh M. S. Al-Munajjid

Who said the blood is to reach Allah? Who? Our deeds do reach him, but not the blood of an animal.

The animals are not slaughtered for the sake of being slaughtered. They are slaughtered so that it would be given to the hungry, the poor, those in need. NO religion but Islam has such a practice. It shows love! In Islam it is encouraged for Muslims to break bread with the poor so the poor won't be distanced from the rest, the poor would get what need and also the rich won't become arrogant.

As for a Muslim, not its generally not permissible to be vegetarian. Yet for one who wants to convert, I won't push them into following all Islam's commandments at once. Our prophet when he came he incrementally brought the commandments. ~Example: First the verses of Wine having adverse effects was revealed, then verses of not praying when you are drunk and then later verses about it being forbidden.

As for an argument. Ask the vegetarian, how do you eat plants? Don't they have a soul? Aren't they living? Why are you killing them?

Not the answer you're looking for? Browse other questions tagged conversion sacrifice eid-ul-adha .