If statues are haram, why are there statues in Muslim-majority cities? [closed]

Questions on Muslim culture or behaviour unrelated to the teachings of Islam are off-topic here. See: Islam SE: Not an Muslim Peer Support Group.

I'm in Tehran at the moment; when I walk down the street, I see many statues of animals and humans. For example, here's a photo I took of the inside of a shop in Tehran: 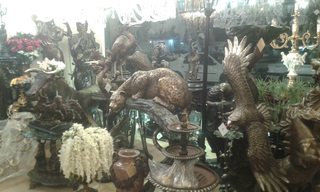 This seems surprising, since (as I've just learned) tasweer (picture-making) is haram.

I've also seen statues in Istanbul and Tashkent. Here are some of my photos: 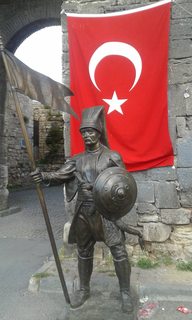 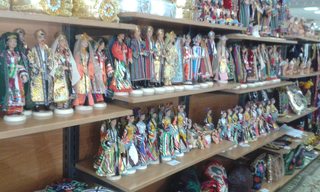 It seems statues, and three-dimensional depictions of animals and humans are common in Muslim-majority cities.

Question: If statues are haram, why are there statues in Muslim-majority cities?

(Related questions: Is drawing people prohibited in Islam?, Can Muslims make statues for non worship purpose?, Is it haram to use a wallet which has a design like a horse and a deer?)

Motivation: As a revert, I'm bewildered by the enormous number of claims that "X is haram", "Y is haram". There's so many claims, it's impossible to avoid all of them while still functioning in society and retaining some enjoyment in life. As a result, I intend to prioritize avoiding major haram matters.

In this case, I simply don't know if "statues are haram" is regarded as serious, but given that I see Muslim-majority cities from diverse countries having statues on display, I think this is low priority. However, it is possible that I'm simply wrong about this (for some reason I'm unaware of). It's possible different sects have different attitudes; it's possible different countries have different attitudes; I don't know, as I haven't experienced them all. My current impression is that some strict scholars online forbid statues, but Muslims in general don't mind.

Having just learned about tasweer, I'm wondering if I should e.g. change the background image on my phone (it's a cartoon drawing of a punky Asian woman, which I thought looked cool). But it seems strange to do so when Muslims far more educated than me don't seem to care about these things.

I think this is matter based on different opinions. Some may say statues were haram at a time where the Muslims were close to kufr (at the time of the Prophet etc.) and as those statues are not meant for worship they are somewhat halal or makroh.

Because people who were former pagans may easier have a fall back, while people who grow up in a monotheistic environment may not easily be influenced with such a thing.

What really is haram is (with shari'a evidences) drawing living things and idols (for worship) anything else is debatable. Note that the major reason for it being haram is that people used to worship these things (this is my understanding and conclusion of all those hadiths prohibiting it). So even drawing living things these days might be questioned. If you think of many pagans and their worshiped deities you may easily understand that in fact idols and anything which is related to them are really meant by this prohibition.
Maybe when it comes to drawing the fact that one might try to copy or by any means create something which is considered as a kind of blasphemy or a kind of competing with God in matters of creation may be taken into account. That's why I don't see no harm that children draw pictures, as it is a kind of form to express themselves and we know that children are still on the fitra (God's nature), so how would they by any means intend or do any thing which has the meaning of blasphemy.

On the other hand I'm not sure whether you may find such things in all Muslim countries. For example the only statue I know in Morocco was a statue of a Lion made by a German resident during the French colonization in Ifrane.

Also note that Turkey is until now a secular state in western style, so the fact that there are sculptures or statues there doesn't mean that the religious people may not reject it (at least in their hearts).
And Tashkent until a few decades ago was part of the USSR, so maybe people got used to this.
Tehran so far is the only example, which also includes a special case. Iran as a country which is lead by the shi'a doctrine. As I don't know much about it I just want to point at this.
We also know that there have been statues of Saddam Hussein in Iraq etc.. But we must again consider that the country itself is a Muslim country but the leading party was a socialistic or communistic regime. Therefore you may often find a reason out of the rules of Islam which may be the "excuse" for a statue being there.

Finally when it comes to shari'a there are three kinds of statues and drawing which have been made or clearly declared as halal:

According this "fatwa" or Article it is allowed to have museums with statues, which show a part of history, as they are not worshiped.

48
Is drawing or photographing people prohibited in Islam?
2
Can Muslims make statues for non worship purpose?
1
How can I determine whether or not a mobile phone background image is appropriate?
1
Is it haram to use a wallet which has a design like a horse and a deer?

5
Is there a non-haram way for a teenage Muslim to pleasure himself?
4
If cigarettes are Haram why are many Muslims smoking shisha?
8
To what extent is "thinking for myself" forbidden in Islam?
1
How can I determine whether or not a mobile phone background image is appropriate?
6
What are the conditions for meat to be halal if the animal was slaughtered by the people of the book?
0
Is it haram to swear if you are not insulting?
0
Is it permissible for me to take commissions online to paint landscapes and cities without drawing anything haram?