A Christian recently argued with me by quoting Al Ahqaf:30 that Prophet (S) had the Original Thaurath in his hands.

Here is what he said:

"Let me give you some more proof that the Torah at the time of Mohammed was the truth, acording to your Prophet. Take for example Surah Al-Ahqaf[46] verse 30, in your major translations by Muslims. Take the translation by Abdullah Yusuf Ali. It says: "They said, "O our people, we have heard a book revealed after Moses, confirming what came before it; it guides (men) to the truth and to a straight path." Look at the words highlighted above that say "before it." In the Arabic the words are not "before it." Let's do a word for word translation, and I leave it to the Arabic reader to be honest to himself when he reading this word for word translation: Arabic: kaloo ya kawmana inna sami'ina kitaban unzila ba'd Musa English: they said O our people we have heard a book revealed after Moses Arabic: Musadekan Lima Bayna Yadayehe English: confirming what is between his hands Arabic: Yahdee ela al-hak wa-ela tareekin mustakeem English: it guides to the truth and to a straight path My point is the un corrupted BIBLE was in their hands at the time of Mohammed. Where is the uncorrupted copy of the BIBLE. Why is it that we have copies of the BIBLE from the &th century and copies from the 4th 3nd the 2nd and we also have copies from the 10th 12 th an up to today and all say the same thing. all come from the same manuscripts in Hebrew, Greek and Aramaic. So I dont have a clue what youare talking about. you are just repeating what you have been told. I suggest you go study your own religion first before you comment on a religion you dont know anything about."

"Here is the right translation. Of Ahqaf:30

{They said, "O our people! We have heard a Book revealed after Moses, confirmation for what is before it: it guides to the Truth and to Straight Path. }
One thing you said is right.The word-by-word translation says “What is between its hands”.It is an Arabic idiom for saying 'In front of' or 'before'.See Al Baqara 66 for Example. Now you have quoted Ahqaf:30 and stated that Original Thourath existed at the time of Prophet Muhammed (S). My question:Where does it say that 'Thaurath exist in its original form'? Nowhere.It just says that Qur'an conforms the Thaurath.It says about the Thaurath,which is already corrupted. How can you know that the manuscripts you said,which belongs to 2nd,3rd,4th centuries,etc are not corrupted? Just have a check at the Great Isaiah Scroll: http://www.answering-christianity.com/topic_1996.htm "

"You getting your information from answeringchristianuty.com no wonder you are confused. This guy Osama Abdullah fabricated emails, then had to admit and apologize. This is your source of information a confessed liar. A man whi CHRISTIAN PRINCE destroyed in every debate. Wow you are really lost. Seeing that you cannot read either Arabic or English. The verse says BETWEEN HIS HANDS that sir means the prophet had the uncorrupted copy in his hands. The words translated as BEFORE IT doesnot mean that it is a deception the proper translation of BAYNA YADAYEHE. Is BETWEEN HIS HANDS. Your lieing schollar neglected to tell you what the arabic really says. My next question would be, WHY WOULD YOU HAVE TO LIE TO PROVE THE BOOK OF UTHMAN TO BE TRUE?."

As you see,he didn't accept what I said: "The word-by-word translation says "What is between its hands".It is an Arabic idiom for saying 'In front of' or 'before'.See Al Baqara 66 for Example."

And you had already known about those who transgressed among you concerning the sabbath, and We said to them, "Be monkeys, despised."

The verse 66 says “Bayna Yadayha” which means 'between her hands'.But it is absurd to translate it like that.

{And it is He who sends the winds as good tidings before His mercy, and We send down from the sky pure water}(Holy Qur'an 25:48)

Now,before replying to that Kafir,I just want to conform my point: In Arabic,'Between the hands' means means 'before' and 'in front of'.It is an idiom or figurative speech. I need conformation for that Please say if I am right or wrong.

Our debate was of course about the preservation the Bible/Thaurath/Injeel. I am preparing answers to give him.I can get that also from the answering-christianity blog(http://www.answering-christianity.com/blog/index.php) But my real doubt is,as the title of my question says,the meaning of 'bayna yadayhi' or 'between his hands'(Please reread the last part of my question).I asked it here because I thought there would be people knowing more Arabic.
I hope I will get a good reply from here.
Thank you.
Salam,
S.H.O

as you said. yes it's an old Arabic idiom that means "In front of". it is an old idiom that is not used today.

this picture might be more illustrative , it's taken from this video https://www.youtube.com/watch?v=8hsj_pi5Mes 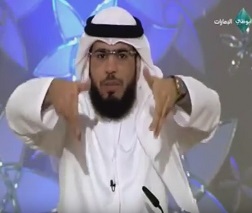 Look at suratul Hujurat. It says do not put yourself forward in front of God and his messenger. http://islamawakened.com/quran/49/1/default.htm

Tell your friend do not take verses in Isolation. If you would you can falsely claim all people including Muslims are damned to hell just by isolating two verses in al-asr 103:1-2

Not the answer you're looking for? Browse other questions tagged quran arabic quran-translation torah scripture or ask your own question.