I shifted to uk last year and I have been confused by the fact that people I live with think they are hardcore and correct in Islam and everything and get hot headed when told them to correct e.g. The "Prayer Chart" had timing which was 15 min forward then what time "tv" channel told for iftar or open fast and they made me feel bad about fact that I opened fast quickly while they waited to adhan on tv (which never happened), to which they changed there statement for sher, anyways I wanted to find out more about the calculation time and how we know which one to follow?

Following is a picture of different calculation method. How can one read it to find which is right one for them from where they live and how can one win a argument with people who think they know everything and try to show you less educated in front others, in Islam? 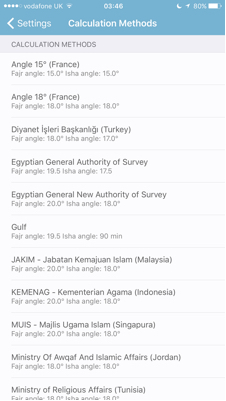 First of all i repeat saying that I'm no expert on this matter and my answer is based on my interpretation of this article in Arabic (in addition to other references I found). I try to transmit what I've learnt or understood as is, so you will see me pointing at critical points and at discussions, but I won't tell you whom might be right or wrong. For example: when it comes to the discussion of the relevant angle for fajr and 'isha timing I'll just transmit the information as precise as I can as different references use different definitions or terms, so I'm not even sure whether it's the same angle they are quoting.

Note as I said in my comments the views of the madhabs play a role in the difference of the calculation or prayer time. And I'm not sure if and to what extent Muslims in Muslim country use the discussed calculation methods, as they might have a good database due to observations, based on the knowledge of the time ranges or limits for the prayer times according a madhab see for example in al-Muwatta'.

Note again for maghrib the shia' view is totally different and would need a special formula, as they say: as long as the redness in the eastern sky appearing after sunset has not passed overhead, Maghrib prayer should not be performed. It is usually taken into consideration by assuming a twilight angle like Maghrib = Dhuhr + T(4). (Same source as above).

The problem with fajr and 'isha'

Note just to let me give a true-to-life example of the significance of such a difference: based on angle calculations of 15° or 18.5° for locations around the Arabic Peninsula, the time difference (error) is of up to 30 min. Which means at some location one may pray fajr or 'isha' 30 minutes earlier than the exact timing (with the wrong value of an angle).

Here a quote for the calculation for 'isha and fajr timing from moonsighting.com

Above 51.5° (e.g., Cambridge, UK), the sun does not go 15° below horizon on the longest day of the year. On other days, Isha calculated at 15° will give Isha time 2.5 hours after Maghrib. This becomes hardship.

Above 54.5° (e.g., Copenhagen, Denmark), the sun does not go 12° below horizon on the longest day of the year. On other days, Isha calculated at 12° will give Isha time 3 hours after Maghrib. This is even more hardship, so it is impractical.

Also note that the calculation method of Um al-Qora was lately (2008) revised from 19° to 18.5° and before that a revision for the time for 'asr prayer has been made based on one single "measurement" by observation of one single (sent out) comity!

It is exactly this assumption of a fix angle that creates problems, as a fix value could fit for some region of the world better than for an other, while it could be totally wrong elsewhere: So the method of Um al-Qora might apply for the Arabic peninsula but not at all for Europe or North America. On the other hand even if we assume we found a value for that angle which fits for the summer, we might need an other for the winter and maybe even for each couple of months for the same region. Which might lead to errors of up to 90 min (before) the actual prayer time in northern Europe or America, if we fixed that angle according to Um al-Qora for example.

Hints for the right choice

So one should chose the right method depending on where one lives: So for example if you live in Saudi Arabia you could use any method even Um al-Qora as the possible errors could only lead you to pray after the actual time instead of before as stated in the example above!
For most countries of southern Europe and central Europe the calculation method of Muslim World League would fit with a reasonable level of accuracy which declines the further north one is living (Especially for the two critcial prayer times fajr and 'isha').

In Europe and America one can find some reasonable calculation methods -at least for a season or couple of months in the year- which must be adapted, as they apply only for at most one season. For example in Vancouver (Canada) most known calculation methods declare fajr/sobh prayer 90 minutes before its real time in May!

So the best solution is to get time tables or chart which are based on (local) observations of astronomers, which mostly (or hopefully) could be found in mosques. An other possible solution is the use of applications which change/vary this angle with the change of time and season. One of those methods is that one of moonsighting.com and one could easily download a prayer schedule for the whole year from the site (see how they calculate here). And there seem to be an other app called Sky Prayers which uses the same method.

Note That some calculation methods instead of using a formula for the calculation (the deviation angle) of 'isha and fajr prayer times add or subtract a fixed amount of time:
Um-al-Qora uses 'isha'= maghrib + 90 min during the year with the exception of 'isha' = maghrib + 120 min during Ramadan.

Finally a practical hint: In most local newspapers (at least in Germany) you may find each day a timing for sunrise and sunset if these times are approximately (+- max. 5 min) the same as to what you find on a your prayer chart, then your charts are useful, as I've read on the site of moonsighting.com that maghrib time (sunni) is (theoretical->should be newspaper value) sunset + 3min or (shia or ja'fari) sunset (theoretical) + 17 min.. So at least for 3 prayers (dhor, 'asr, maghrib) you could be sure that you have a useful timing.

I hope I could help to some extent.

UPDATE well I just read this article in Arabic which shows that -at least- in Germany fiqh scholars and astronomers are encouraged to work together on updated (corrected) prayer time tables for 2017!

1
Should I follow the prayer times of an app or from the local masjid?
4
There were no clocks 1400 years ago, why do we care so much about exact timings of Adhan and prayer, etc time today?
5
Prayer times calculation organisations differences?
3
Much ado about moon sighting
2
Can I do prayer at this time?
1
Do the prayer times change throughout the month? If so, is it bad to pray too early or late?
2
Different day of Eid around the world?
2
Adhan and timings of prayer
2
What is the prescribed time to start fasting from?
1
Different Fajr prayer time which one to follow?
See more linked questions

4
What's the significance of placing one's right hand over the head after the prayer?
5
Prayer times calculation organisations differences?
4
Do angels enter our houses during the time of the Maghrib prayer?
2
Is it right to offer prayer with naked neck for women?
0
Standing up to abuse vs leaving matters to Allah when someone uses violence on you and your parents, to intimidate and coerce?