What Duaa is to be recited before breaking the fast and at the beginning of the fast?

I want to enquire as to whether or not the above mentioned Duaas are mentioned in the Sunnah of the Prophet. If not, can you please state the Supplication to be recited?

Analysis of the given formulations

I begin with what you called dua' at the beginning of the fast.

so this is apparently a pronounced niyah or intention saying that you intend to fast the next day (which is a day of Ramadan), but there's something missing here!

Some scholar consider such a "pronounced niyah" a bid'ah. And this isn't a dua' at all. This page provides a lot of bid'ah which are related to Ramadan in Arabic.

Allahumma: O Allah
laka sumtu. for You I have fasted
wa bika aamantu: and I have believed in You (could be also considered in the meaning of presence form)
va Alaika tawakkaltu (wa alaika tawakaltu): and on You (only) I relay on
wa Ala rizqika: and by Your provision
aftartu: I have broken the fast

This is partly a known dua' but includes some additions, yes it isn't a bad dua' at all, but we have better sourced formulations!

There are a couple of formulation for dua' which are supported by Hadith such as:

This is taken from sunan abi Dawod (qualified as da'if by al-Albani, while abdulqadir al-Arnaout said that it "has some witnesses ولكنه له شواهد" , the Issue with this hadith is that it was narrated as a hadith but the last person who said that our Messenger used to say ... isn't a sahabi so the narrator chain is disconnected, but as it seems it has been narrated by others like Imam Ahmad -maybe- with some kind of weaknesses, but the amount of the narrations my support it)

This is the most known formulation from sunan abi Dawod (qualified as hassan).

The last version is quoted as a dua' abdullah ibn 'Omar used to say according to a comment of ibn abi Mulaika (which has not been translated) in sunan ibn Majah.

I've also heard a combination of the two first du'a's which goes like this:

but as said it has as stated no backup in the sunnah, but is indeed a (correct) form of du'a. It could be used for that purpose but not with the believe that it is a correct passed on sunnah.

Recommendation of du'a while fasting

As much as I could search I couldn't find any backup for any kind of formulation for a du'a before beginning the fast. But there are hadiths which recommend performing du'a while fasting (without a given expression) like this one from jami' at-Tirmdihi:

“There are three whose supplication is not rejected: The fasting person when he breaks his fast, the just leader, and the supplication of the oppressed person; Allah raises it up above the clouds and opens the gates of heaven to it. And the Lord says: ‘By My might, I shall surely aid you, even if it should be after a while.’” (on the authority of abu Hurraira)

here is Dua for Breaking fast and sehri dua. 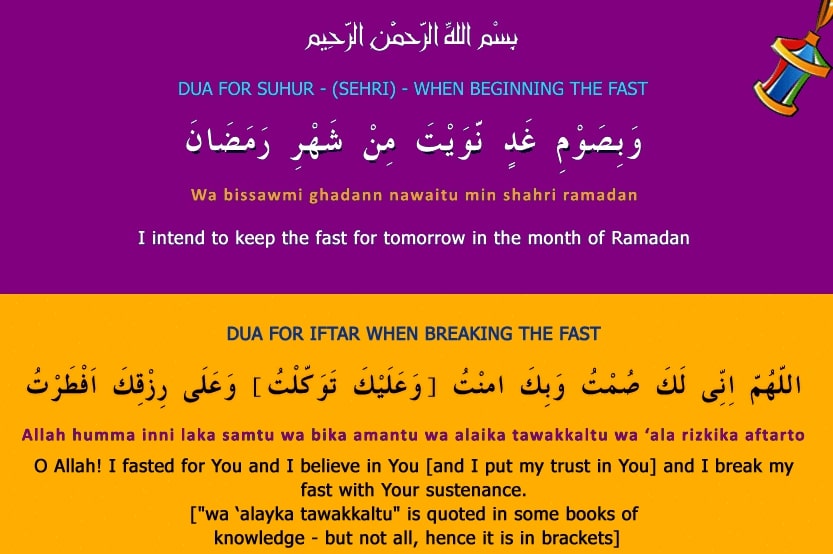