I see that Islam has given very good options for people to remain sexually fit. My question is that nowadays usually people have only one marriage and even that at an age of 25-37 (my own observation, which may be very wrong). Now there is a whole lot of time in between which is spent without having a wife.

The evidence presented by them is

Quran 23:5-7 And they who guard their private parts. Except from their wives or those their right hands possess, for indeed, they will not be blamed. But whoever seeks beyond that, then those are the transgressors.

With the interpretation that a person himself is neither a "wife" nor a "slave" and hence the prohibition extends to himself.

Muhammad bin Abdul Hakim said, I heard Harmalah bin Abdul Aziz saying that: "When we asked Imam Malik about the person who masturbates, he recited this ayah 23:5 ...

Imam Ahmad bin Hanbal, despite his piety, declared it permissible. His view was that its the expulsion of waste from the body and is permissible to excrete it when one feels it necessary, and that it is based on blood-letting and cupping.

From the view of the Hanbali scholar Ibn Taymiyah mentioned on islamQA:

Shaykh al-Islam Ibn Taymiyah was asked about a man whose desire overwhelms him and he masturbates, and he knows that this may be dealt with by fasting but it is too difficult for him.

First of all, I would like to say that this question is very relevant as it pertains to a lot of muslim youth in this modern world.

I'm planing on pursuing studies that will probably last until I'm in my 30's and I can't get married until I have a stable life.

But honestly, what I came to understand was that one should just put their trust in Allah and believe that if their will is to really please Him, then he will guide them.

Take it step by step and if you feel the urge to succumb, remember Allah, say "Astighfiru'lah" and He will help you.

Remember that no hardships that a soul couldn't overcome were created for it.

After all, this life is a test and it may seem like a 100 years is a long time, but what is it compared to eternity?

My brothers and sisters, I ask Allah to guide us and forgive us. Allah, the the most merciful and the Supreme guide.

And they who guard their private parts

But whoever seeks beyond that, then those are the transgressors

One day after one of Ibn Abbas's classes, everybody left except a young man who stayed behind. Ibn Abbas asked him what he needed and he replied that he wanted to ask a question but was too shy to ask in front of other people. Ibn Abbas said: "The scholar [alim] is like a father, so speak to me frankly, as you would to your own father." The young man said: "I am an unmarried young man, and sometimes I fear hardship upon myself, so I masturbate [astamni] with my hand." Ibn Abbas turned his face from him and said: "Fie, alas! It would be better to marry even a slave-girl, and yet it is better than adultery.

Ibn Abbas did not say, it is haram. But his expression indicates that though it is not haram, it is highly disliked. He said, “it is better than adultery.”

So, if you follow the view of Ibn Hazm (may Allah have mercy on him), it is halal in the said situation.

According to Ibn-Taymiiah it's haram by most of scholars, and it's the most authentic sayings of Imam ahmad , and the other saying that it is Makruh. Most of them say it is haram whether he is struggling or not, and some of them said it is fine if he feared "Zina" , and he couldn't avoid Zina unless he masturbates, or to be afraid that he will be ill. Then he said:

but without the necessity , I don't know anyone who permitted it.

Scholars in general say it's Haram

"And those who guard their chastity, except in the case of their wives or those whom their right hands possess, - for then, they are free from blame; but whoever seeks beyond that, then those are transgressors." -23:5-7.

❝This impure act is Ĥarām and impermissible. Allāh jalla wa álā has only mentioned the wife and the legally valid slave-girl in order to fulfil this need. He has clearly stated:

❛So those who desire more than this – it is they who are the transgressors.❜

It is in the Ĥadīth:

Yes, if an individual is young and has intense desire, and he has no wife or legally valid slave-girl, and the intensity of desire compels him, and at that time even by busying oneself in some work or sitting with men the heart is not calmed, in short, that desire does not decrease in any condition, to the extent that he has certainty or overwhelming idea that if he does not do this act at that time, that he will fall into Ĥarām, and thus in such a condition, in order to be protected from zinā and liwāţat [sodomy], only in order to calm the desire, not with the intent of obtaining pleasure and fulfilling desire, if this act occurs, then it is hoped that Allāh táālā shall not call to account for this. Then alongside this it is wājib, if he has the ability, to do nikāh immediately or purchase a legally valid-slave-girl, or else he is a severe sinner and deserving of curse. 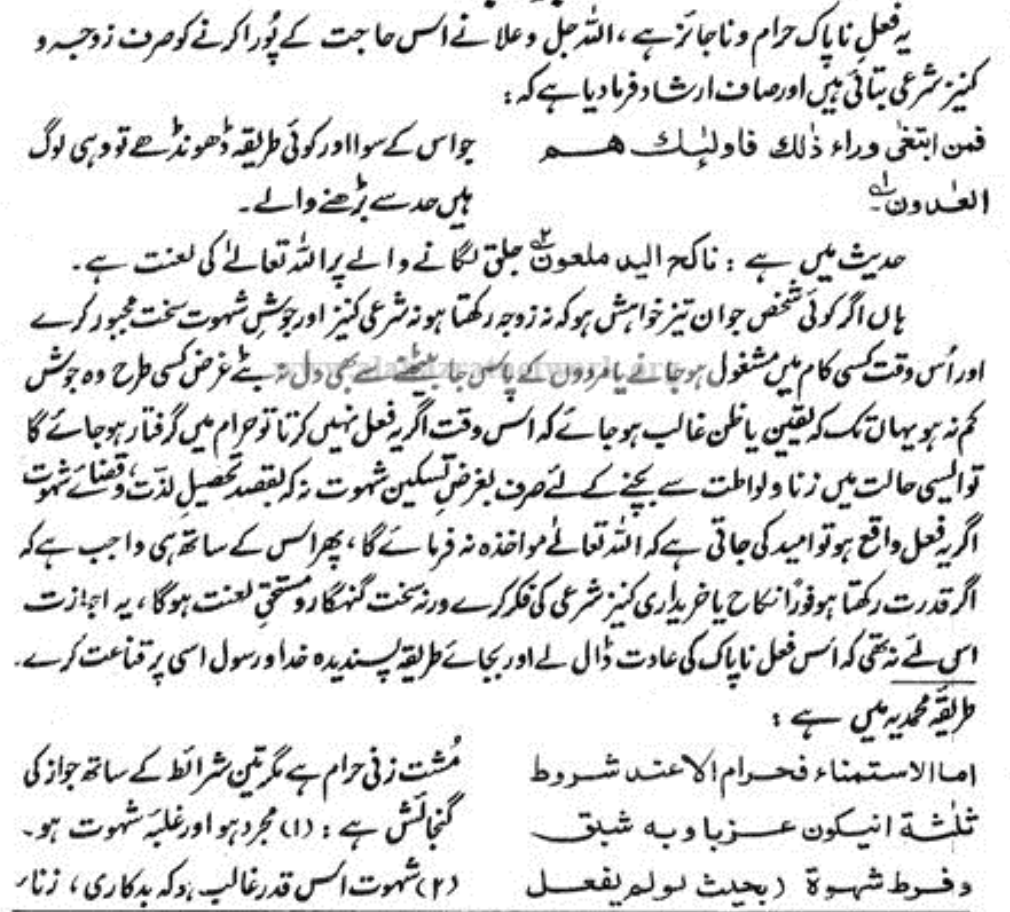 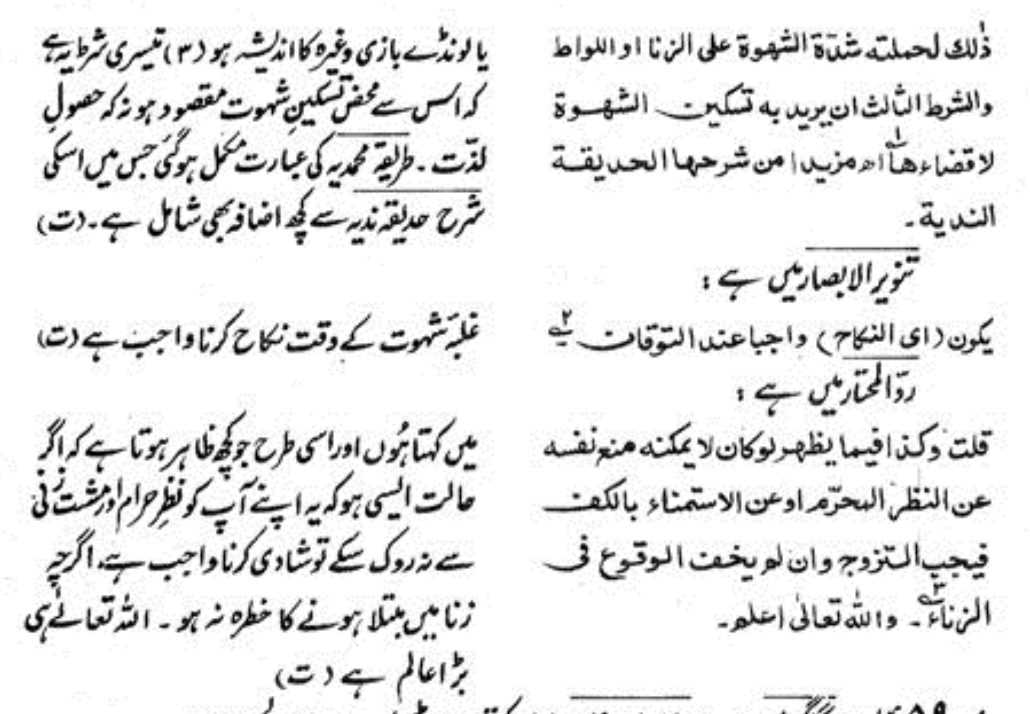 conditionally it may be better than engaging your self in adultrie, but if desired is not beyond control automatically it's haram.My suggestions is that fattaqullah satta da'a

Some scholars (like Imam Shafi) use the following Verses/Hadiths to say that it is haram:

And those who guard their chastity. Except from their wives or the captives and slaves that their right hands possess, - for them, they are free from blame. But whoever seeks beyond that, then those are the transgressors." [23:5-7]

And let those who find not the financial means for marriage keep themselves chaste, until Allah enriches them of His bounty.[24:33]

We were with the Prophet while we were young and had no wealth whatsoever. So Allah’s Messenger said, "O young people! Whoever among you can marry, should marry, because it helps him lower his gaze and guard his modesty, and whoever is not able to marry, should fast, as fasting diminishes his sexual power. [Bukhari:5066]

Muslim narrated from Abu Hurirah, that Said Ben Obada Asked the prophet (when the Ayah for the witnesses came down), if I find my wife having intercourse with another man, I have to leave them until I get 4 witnesses to catch them in the act? The prophet answered Yes.

Highly active question. Earn 10 reputation (not counting the association bonus) in order to answer this question. The reputation requirement helps protect this question from spam and non-answer activity.
Like any library, Islam Stack Exchange offers great information, but does not offer personalized advice or legal verdicts, and does not take the place of seeking such advice from your Mufti, Imam, or other trustworthy Counselor.