Why do people wear hats when they Pray? [duplicate]

This has been another issue I continuously wonder about, when people are just about to offer prayer or when they enter a Mosque they put on hats similar to the one in the picture below: 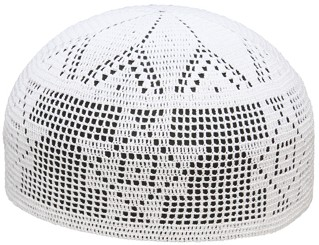 If you believe that wearing the hat is Sunnah or mandatory than please provide the relative evidence!

Also take into consideration the environment the prophet PBUH, where a hat may have been used as a form of protection from sun rays!

If in short i try to explain,
There are two point of views about hats, or more precisely covering heads (for men, for women it is mandatory for them) when praying.
1. It is mandatory and prayer will not be valid without it.(this is based on the point that prophet peace be upon him used to cover his head all the time, and there is no proof of him praying without covering the head.)
2. It is better to cover head for men when praying. But it is not mandatory.(This claim is based on some evidences which shows some people prayed without covering their heads in front of prophet and prophet said nothing(This is considered to be approval). So, it is not mandatory but sunnah to cover the heads when praying.)

As you didn't mentioned you need some proofs or actual references to the evidence, and your question seems to be only requiring some basic understanding of what it is. So, i have not included any details of both point of views.

PS: Personally i go with second point of view, as it is more logical.

The hat is sunnah. There are many hadiths which show that the prophet (Saw) wore a hat in prayer.

Wail ibn Hajr mentions how he looked at the congregation and they were wearing hats (http://sunnah.com/abudawud/2/338).

In another hadith, the Prophet (Saw) says that "The difference between us and the polytheists is that we wear turbans over CAPS" - the polytheists wore turbans without caps, while the Muslims wore caps first, and turbans on top. Thus, the wearing of caps is sunnah (http://sunnah.com/tirmidhi/24/73 - note that Albani calls this narration weak, but his gradings are contested).

Also, in Hajj, the Prophet (saw) instructed everyone not to wear hats, which shows that it was normal for them to wear hats. This is further proof that hats were worn.

Furthermore, there is a hadith in which Umar (ra) or the Prophet (Saw)'s hat falls off, which again indicates that hats were worn.

The large body of hadiths on the wearing of caps indicate that it is sunnah to wear them.

Some people say that hats were worn outside prayer but not in prayer. This is unlikely. If it were true, there would be lots of hadiths describing how the Prophet (Saw) and sahaba took off their hats before praying. Such hadiths don't exist, which means this didnt happen.

Not the answer you're looking for? Browse other questions tagged salat .

11
Is it obligatory for Muslim men to cover their heads while praying?

4
Can one pray home when it is raining heavy?
7
How can people pray in space?
1
How to know when to pray?
3
Is it permissible for muslim men to wear socks and pray salat?
2
Why do people pray salah differently?
1
Why do we wear Hijab during Salat?
0
Why is it when I pray, something bad happens?
0
Can I wear this and pray and do other stuff